Never Mess with Muskox Bulls in the Rut! 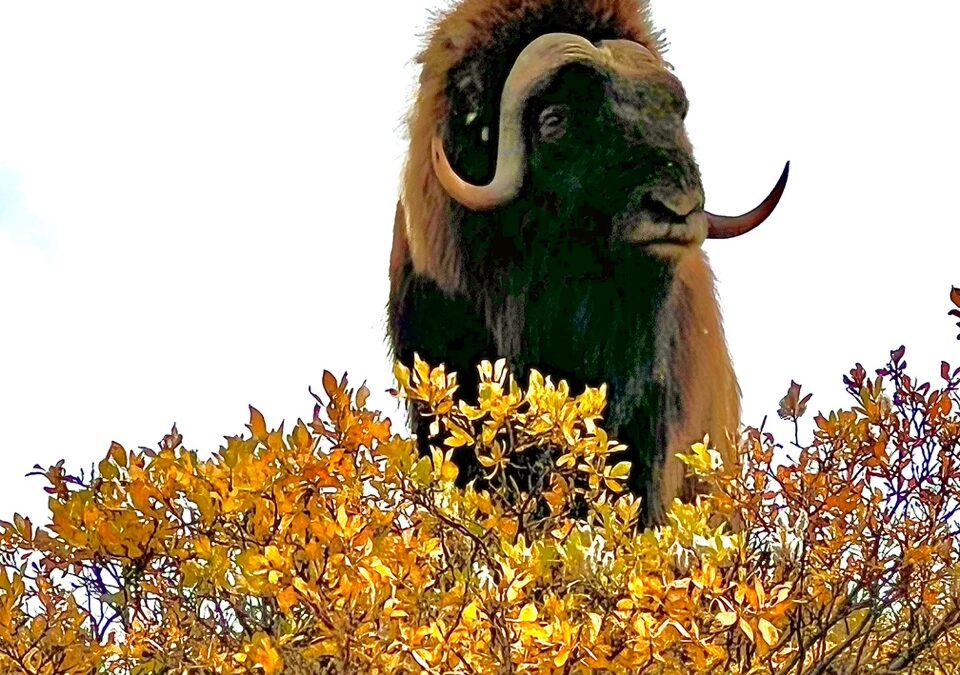 When I invited my son, Bryant, to join me for the last week of August 2022, on a “do-it-ourselves,” Alaskan caribou hunt, I could never have guessed that the biggest excitement of our time together would revolve around a bull muskox, rather than a bull caribou!

Thanks to a friendly airboat transporter, we were able to pitch our camp on the far side of the Sag River, opposite the haul road, and about 40 miles south of Prudhoe Bay. While setting up our tents near the edge of the bluff above the river, we noticed a few stray caribou here and there — as well as three muskoxen out on the river plain below us. We’d been told we might see some, but that there would be no open season on them until 2023. Several days of hiking and glassing turned up a few more muskoxen in different places, but no mature caribou bulls worthy of hanging on a wall.

The fourth day, however, produced an adrenaline rush for me that I will never forget — neither in this life nor the next. I was sitting that afternoon on the edge of a little draw, upslope about 200 yards from the edge of the river plain. I suddenly heard the sound of hooves on gravel directly underneath me, and I quickly realized a muskox bull was headed straight up the little game trail I was seated right at the top of. Having my cell phone handy in an open jacket pocket, I managed to snap a picture of the beast as he reached a point just five or six yards below my still-sedentary posterior. The click of the camera lens turned him around, and — after spending about 15 seconds sparring with some nearby willow branches, much like a caribou bull in the velvet — he moseyed back down the trail, then turned and started walking further up the little canyon.

The thought immediately struck me that I might be able to get some really great video of the bull, if I kept out of sight and quickly scurried after him, being careful to stay out of sight until I figured I was probably more or less right above him again. My calculation proved to be on the money, but I’d NOT imagined he might head directly up the steep 45-degree slope to meet me!  Only steps away from the edge of the bluff, I had just pushed the video record-button, when suddenly the big fellow popped up over the top, right in front of me — no more than 10 or 12 feet away. The camera was rolling, so to speak, but all of a sudden I was no longer focused on filming my “quarry.” I was focused like a laser beam on reviewing what options might be available to me, in the event of a full-on charge.

Escaping death or serious injury was now foremost on my mind. If the charge did come, I knew that running straight away from him out into the flat, wide-open tundra would very likely result in an ugly outcome. The thought occurred to me that, since his rear hooves were still below the edge of the bluff on the steep gravelly slope he had just ascended, the bull would probably not be able to launch his charge quite as quickly as if all four hooves had been resting on the same level terrain I was standing on.  Hoping to defuse the situation, I made my best imitation of a dog bark. Showing no reaction whatsoever, the animal just stood there glowering at me. I thought of backing away from him slowly but then realized that my only real escape route — catapulting myself off the bluff, by shooting just past the side of his oncoming head — would no longer be a possibility. I realized I was on the horns of a dilemma, but the last thing I wanted to be on was the horns of an enraged muskox.

Since the dog bark had left my antagonist unimpressed and unwilling to turn around, I waved my arms over my head and let out as loud a yell as I could muster. With that, the bull lowered his head, and the charge was on. I believe he tried to hook me with his horns as I sailed past him into the void, but I felt nothing — other than a huge sense of relief as I landed about 30 feet below, lost my balance, and tumbled the rest of the way to the bottom of the ravine. Totally unhurt (by God’s Almighty grace), I popped to my feet and turned to look up at him. There he stood, fully silhouetted against the sky, staring down at me, just daring me to come to mess with him again.

As the reader can imagine, he didn’t need to teach me a second lesson. The muskox mating season was in full swing, and I had just been reminded that this was precisely the time for it. Later that evening, as my son and I were preparing and enjoying a Mountain House dinner outside our tent, two muskox bulls showed up and put on a fully half-hour-long rutting spectacle just 250 yards away. There was no doubt in my mind that one of the two protagonists was the one I’d become acquainted with earlier that day.

Charging each other again and again, the pair put on a display of rutting violence and ferocity exceeding anything either of us had ever witnessed before — even from the other horned or antlered species of North American big game. Needless to say, my cellphone video captured many segments of that awesome drama. Such film footage will forever remind me of the lesson I almost had to learn “the hard way.”