Year ‘Round Timeline for Scouting Cameras 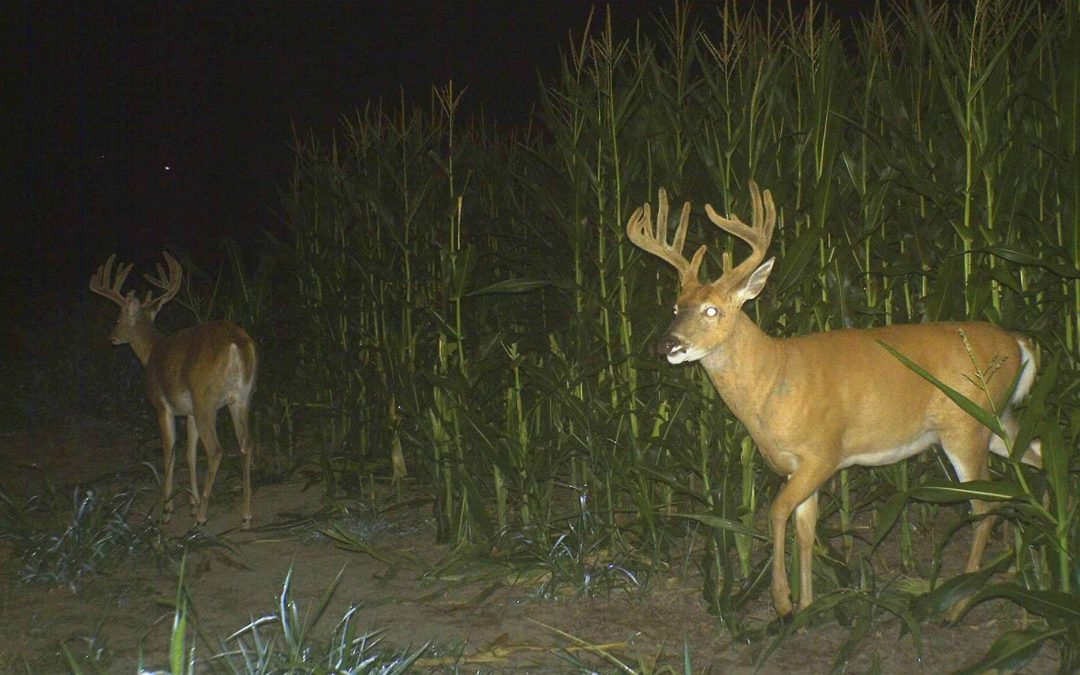 If you put your trail cams away after hunting season you are missing out!

Most hunters stow their scouting cameras in the garage once the deer seasons close and don’t get them back out again until a couple weeks before the next season. That can be a big mistake. The information gathered from your cameras year-‘round can be valuable in many ways.

The key is putting those cameras in the right locations, and being intentional about moving them throughout the year to take advantage of opportunities for information-gathering.  Let’s take a look at a few strategic camera placements through the seasons. Follow this advice and I believe you will agree that you have more pictures and more quality information to go on next time you head into the woods to hunt.

I offer supplemental feed in the winter to help get my deer through the tough times. It gets cold here in Minnesota, and deer have a tough time getting through the often deep snow and nights that can drop to -40 during January and February.

I mostly use corn, and of course I have cameras on each of my feeding stations. This allows me to monitor the state of the herd’s health, the shedding of antlers and any issues I may have with predators.

By keeping an eye on the deer at this time, I have a good idea when the bucks have shed their headgear, and I like to get out there and retrieve it before the squirrels start working on the calcium- and phosphorous-rich nutrients found in the sheds.

Coyotes and wolves are a serious problem around here; these predators have no problem taking advantage of deer during their struggle to survive the harsh conditions. There’s nothing I can currently do about the wolves , but I do my share to reduce the fawn depredation by removing as many coyotes as I can by snaring and shooting them. When I get pictures of predators on my cameras, I move quickly and show no mercy.

From spring into early summer, cameras placed at mineral sites will take photos of bucks as their antlers begin to grow. You will start to recognize characteristics of specific bucks which helps you learn which ones made it through the hunting seasons and the winter. You can watch the amazing antler growth that takes place at this time, and start to get an idea how much growth the bucks will be putting on during the upcoming three months.

Does visit the mineral sites, and when their fawns are 5-6 weeks old, they will accompany the does. This gives you a chance to inventory the deer population as a whole.

I always have cameras on water during the summer. Those out-of-the-way ponds in the forest will get a lot of use, and that’s the place to get a look at the bucks. Keep in mind that these spots are potential hunting spots so don’t check the cameras too often. Too much intrusion can make the deer avoid these places or use extra caution around them come hunting season.

In midsummer, deer are using predictable patterns going from bedding to feeding areas. Trails are beginning to develop and these trails offer excellent opportunities to get photos of deer and learn their movements and timing.

By the end of August, hunting season is getting close, and I start to transition some of the cameras to their feeding sites. I learn which fields they are feeding in, and placing cameras on the feeding areas themselves will help me pattern where they are moving and what times they are coming through. Food plots, alfalfa, corn and soybeans are prime areas for feeding this time of the year.

The bucks are in their bachelor groups and it’s a fun time to get lots of photos of them as their antlers become fully mature and shed their velvet the first week of September. Keep in mind that the food sources may not be the most obvious ones. The deer feeding in alfalfa and soybeans are the most visible, but there may be a lot of deer also feeding on freshly fallen acorns, hazelnuts and other mast crops.

Be careful to observe which direction the deer are travelling any time you have cameras on trails. Look at the time on the photo and compare it to the direction of travel to determine where the deer are going to and coming from. Deer in the evening are normally leaving bedding areas and deer in the morning are approaching bedding areas. Knowing where these deer are spending the daylight hours will be important information later on, especially with regards to where the does tend to bed.

Another important area for cameras at this time are staging areas near food sources. While does and fawns often pile into the fields well before dark, mature bucks will hang back inside the edge of the woods observing the behavior of the deer in the field, often moving into the open in the last half hour of daylight. These areas where they stage before entering the field will normally be marked by rubs and tracks.

Extreme caution must be taken when checking the cameras at this time. I try to check them right before a rain, and get in there and get back out with a minimum of noise and I avoid wind directions that may be blowing my scent toward the bedding areas. The information can be invaluable when hunting season opens in a few weeks and you do not want to blow it at this time.

Hunting seasons are opening and now we are relying on the cameras for more specific, up-to-date information. We can be a little more aggressive as we check the cameras, still taking whatever caution is feasible.

By the middle of October, scrapes and rubs are showing up throughout my hunting areas and I am moving cameras as I see the transition being made from food-focused movements to breeding focused movements.  By the end of October, most all my cameras are on scrapes. I use scrape drippers to monitor the deer visits and inventory the bucks. There is no better way to get a picture of all the bucks in the area than by having a camera on a primary scrape the end of October.

The rut if going into full swing and I put my cameras on the does. To find the bucks you must find the does; you need to know where they are bedding, where they are feeding and how they are travelling between the two areas. I have my cameras in doe bedding areas and on trails between doe bedding areas and trails leading to food sources. By now you have learned where the does are bedding based on your earlier photos.

The first two weeks of November is peak breeding time across most of the whitetail’s range in North America. The movements of bucks will seem totally random, and in a sense, they are, but they will be looking for does. Learn the areas the bucks like to chase does and get your cameras on them. Bucks tend to push does out of the bedding areas into open timber or surrounding fields. If you know where they prefer to spend the daylight hours, you have found an excellent place to concentrate your hunting efforts during the rut.

Second Half of November

Once the actual breeding is beginning to wind down, bucks spend a lot more time on their feet, putting on the miles in search of remaining does that may not have been bred yet. Trails between known bedding areas are key locations to waylay a buck with a camera and with a treestand. At this time, I am very aggressive about checking cameras, often checking the cards every day. I carry a tablet with me in my backpack and often check a couple cameras in the afternoon, using the information they contain to help me decide which stand to use for the evening hunt.

At this time, pinch points, sometimes referred to as funnels, are key locations to increase your odds of encountering a buck on the move. Scrapes have been all but ignored since early November, but they are getting a few hits again in the latter stages of the rut. I’ll have a couple cameras watching primary scrapes on the edges of fields near areas the does are frequently feeding.

If you still have a tag in your pocket, do not despair. When the rut is over and the weather turns cold, bucks once again settle into predictable patterns. They need high-carbohydrate foods to replenish fat reserves lost during the past few weeks of chaos. Find the food you will find the deer.

Standing corn or soybeans provide them with efficient sources of protein and carbs. The deer tend to group up around the available food and their daily routine allows us to put cameras on the trails leading to these food sources. If snow covers the ground, finding these trails can be embarrassingly easy. Angle your camera up or down the trail to make sure you get full shots of the deer. Make sure your cameras have good batteries in them, cold drains batteries.

At this time of the year I often put cameras right on the edges of bedding areas. Days are short and I will need to hang a stand as close to the beds as I safely can in order to waylay a buck before dark. Keep in mind during December the deer will bed in different locations based on the weather. On sunny days, they tend to bed on the south slopes of hills with open timber so they can soak up the sun’s warming rays. If it’s cloudy, windy and nasty, they will spend their days in thick thermal cover in low areas that protect them from the wind.

So if you are one of the hunters who have your cameras in the garage during part of the year, you are missing out on some excellent opportunities to know your deer better and learn more about their behavior. Be more intentional about moving your cameras to the right places at the right times, and you might be surprised how much it helps increase your odds of filling that buck tag in the fall.