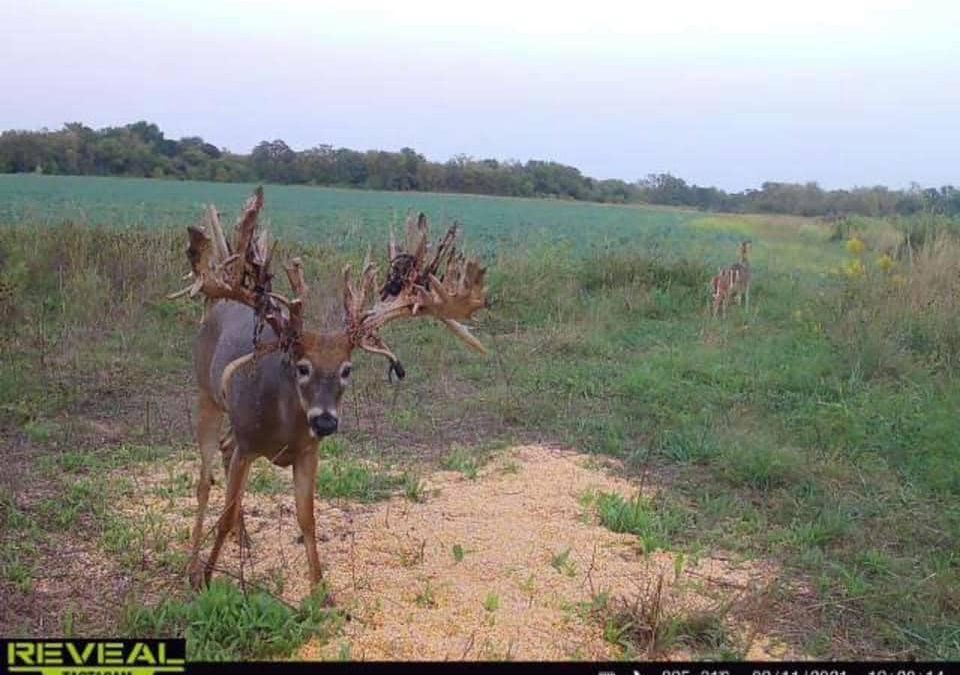 Get ready for two of the most bizarre deer hunting stories involving gigantic whitetail bucks. You really can’t make this stuff up, and the fact that they both happened basically at the same time, early in the 2021 deer seasons, with a lot of similarities, created a lot of confusion. Listen carefully because this is going to get really strange.

On September 11, Blake Keating of Kansas had the shock of his life when he checked a trail camera over a corn pile. Standing there big as life was the biggest buck he had ever seen. Like the biggest buck anyone had ever seen. Like world class. Like world record class. he’d never seen it before nor had a hint that it was alive. Kansas has an early muzzleloader season and you know right where Blake headed out and sure enough, he shot the buck a couple days later.

The buck scored over 300 inches as a nontypical. Yup, World Record size. But something nagged at Blake; there was a small hole in this deer’s ear. That nagging feeling became a roaring surge when the photos of the buck hit the internet. He was soon contacted by a deer farm 10 miles away from where the deer was shot; they kinda recognized that buck. Turns out they had been transferring some of their giant bucks between pens when one buck went missing. Now a buck like this is worth tens of thousands of dollars to the owners, maybe even as much as 100K for sales of semen and eventually the fee for someone who would pay a very large price to shoot this buck and take it home with them.

I’m not interested in discussing the motivations of people who shoot deer that have been kept as livestock and mount them to hang in their “Man” Cave. I don’t have any interest in doing that and I don’t fully grasp why someone would pay $20,000-$50,000 to kill one of those penned deer. But that’s not the point of this story. Blake thought he had hit the whitetail hunting lottery, killing a potential world record buck. He was legit in his hunt, and legal all the way. He was also heartbroken when he learned that the buck was an escapee from a deer farm.

It’s likely he will get to keep the buck, or get paid a big fee to return it. Either way, he has an amazing experience to tell his grandchildren about.

Now contrast that with an even more bizarre story that happened beginning on September 9, 2021.

A giant nontypical showed up on social media, reportedly shot in Kentucky by Derek Settle with a crossbow. Nearly 300 inches of antler on this one as well. He had legally checked it in as a Kentucky bow kill and he insisted on the details of the hunt; it was all on the up and up. He even had trail camera pics of the buck!

Derek’s fame was short lived, as within a couple days, word came out that the buck had been killed on a deer farm in Indiana. And the deer farm, Patoka River Whitetails, had the photos to prove it, and guess who was the happy hunter in the pictures with the penned deer? Yes, Derek Settle. This was a buck they had raised and was known as “White 352.”

He had killed the deer legally on the deer farm in Indiana, then took it to Kentucky and registered it as a Kentucky archery kill. Whether this is a violation of the Lacey Act is yet to be determined, but if it is, he’s in a lot more trouble than just a heaping helping of embarrassment and a few fines.

What’s really bizarre about this case is the head shaker that Derek could think he could get away with this. With the speed of gale force winds blowing a wildfire, info travels across the interweb with blinding speed. It only took a few hours before he was raked across the coals for trying to pull off such and idiotic stunt.

We’ll keep you posted as the final details come in, but in the meantime, Blake has a big buck to look at and a clean conscience, while Derek is lying awake at night wondering what will happen to him.