How to Get Fast Action on the Bear Baits 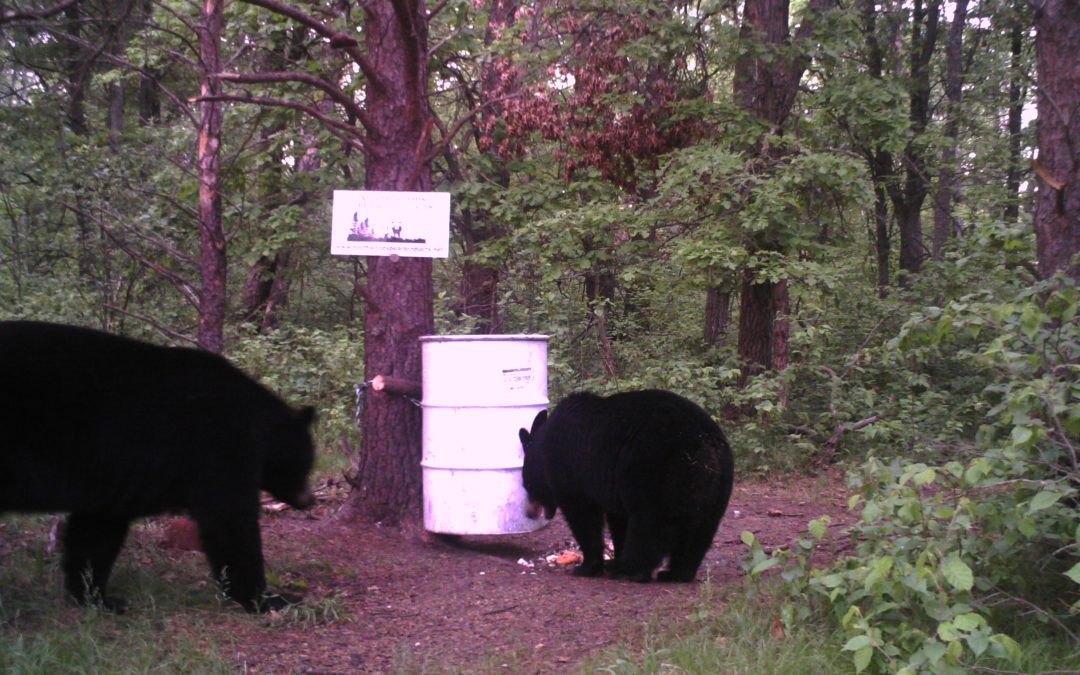 In some areas, you have a short time to get your baits working. Here are some strategies for firing them up fast and keeping the bears coming.

Here in Minnesota, the date you can bait bears is the Friday two weeks before opening day. Through the years 2000 until about 2013, I could draw a bear tag most every year in Minnesota’s Area 45, and several members of my family and friends would also draw tags. That was before the new law that limited the number of baits to three baits per license. The woods were full of bear baits to say the least.

I baited mostly on public land, and even though I would keep to lands outside of the state forests where the pressure was the worst, most every one of my baits had another bait within a mile or two of it. In order to get bears to my baits and hold them there so I didn’t lose them to another baiter, I developed specific techniques for these hyper-pressured situations. Even in areas with much less pressure, these techniques have stood the test of time and have helped me pull in more bears in a short time. Once I get the bears there, I can outcompete the other baiters with quality bait and lots of it, and by using strategies that minimize the odds of turning a bear nocturnal, but that’s a story for another time. Let’s talk about a few effective ways to get the bears on your baits quickly.

The Immense Value of Location

If you’ve read my past writings you know I feel how important location is. Being near water is key and if you can get your baits around natural food sources that ups your odds of getting them within nose range of your baits, because most bear find the baits with their nose first. Get upwind of a swamp where bears can spend the warm summer days and try to use funnels or pinch points, terrain features and edges that will direct a bear’s travel and put the bait in thick cover close to where the bears are already travelling.

There’s something to be said about establishing your site up high on a ridge if there is sufficient cover to make the bears feel comfortable coming to a bait in that area during daylight. Cool evening thermals will carry the sweet smells of your bait downhill in the evenings when the bears are most likely to be on their feet.

Over time, you may move your bait site a little as you learn more about how the bears use the area. One of my best baits was one in which I struggled to get bears to commit during daylight the first couple years. I moved it only about 50 yards higher up the hill and into thicker cover, and we killed many bears there over the next few years. These good bait sites get better every year and once you know you are on location, just put out the bait and use good luring strategy when you open the site and they will come piling in.

High, Low and In Between

When I drew my first Minnesota bear tag many years ago, I was living in Iowa, but I drove to a bear hunting seminar at the newly built Cabela’s store in Owatonna, Minnesota. I remember it well, because I was soaking up information like crazy since I knew relatively little about bear hunting. I remember the presenter stating the importance of dousing the entire bait site with used fryer oil so the bears would get it all over their feet and track it around. He used 10-15 gallons per bait when opening a bait!

I didn’t have access to that much fryer oil and I thought it seemed like overkill to use that much and I still do. However, the feet of the bear are an important part of “spreading the word” about your bait site and fyer oil is a good carrier. I came across Northwoods Bear Products’ Gold Rush concentrate a few years ago and now I use it in opening all of my baits no matter where I am baiting. I’m downright shocked at how this stuff works, there’s no other way to put it. One 4-ounce bottle of this super concentrated stuff will spike up 40 gallons of oil. I like to use about a gallon or two of fryer oil spiked with a couple capfuls of Gold Rush at each site. I splash it on the logs and the ground where the bears will walk. Incredibly this stuff last for days and even weeks with the right soil types.

I like to have a variety of smells to appeal to the individual preferences of each bear, and the feet of the bear are only one part of the equation. Getting some good smelling stuff up high really helps the smells travel long distance. A few pieces of bacon tossed up into the trees is good for this. Several companies make balls and blocks of sweetness that can be hung up in trees to get the smells moving around with the wind.

I carry a spray bottle of scent every time I visit the site and freshen the smell. The bears learn that a new fresh dose of good scent means fresh bait at the site. I tend to use scents like the Northwoods beaver castor in the spring, but fruit type smells in the fall such as Wild Cherry or Blueberry. Anise is always good of course but I think the bears become conditioned to it because so many people use it and it puts them on edge.

Over time I have learned the value of getting some scent on the body of the bear themselves. This is where the liquid spray scents are really effective. The more oily the spray, the better for longevity. Most people just spray these scents up in trees, on stumps and around the bait site. I pay special attention to where the bears will walk down the trails when entering and exiting the bait site. I liberally spray the leaves of bushes their fur will come into contact with. This puts lots of good smell all around the area right at the nose height of any other bears who happen to be in the area. The more the trails become established the easier it is to use this technique effectively and I carry a bottle with me each time I bait to renew the scent.

Get your trail cameras on the baits as soon as you put them out and let the bears tell you what they like. If you’re doing it right, you can have bears on your baits the first night and multiple bears visiting within a couple days.

I’m convinced that bears will seek out the source of stuff that smells good no matter if it is carried on the wind, the fur or on the feet of other bears. Additionally, I am certain that when bears smell another bear’s droppings, which they constantly do, they can tell if the other guy is eating better than they are. They’ll make an effort to find the source of the good eating and the smells of the area will help direct them right to your bait quickly. Then your quality bait and choice of location will keep them pinned down until opening day when you can turn them into a bear rug.