Bear Hunters and their Questionable Judgment 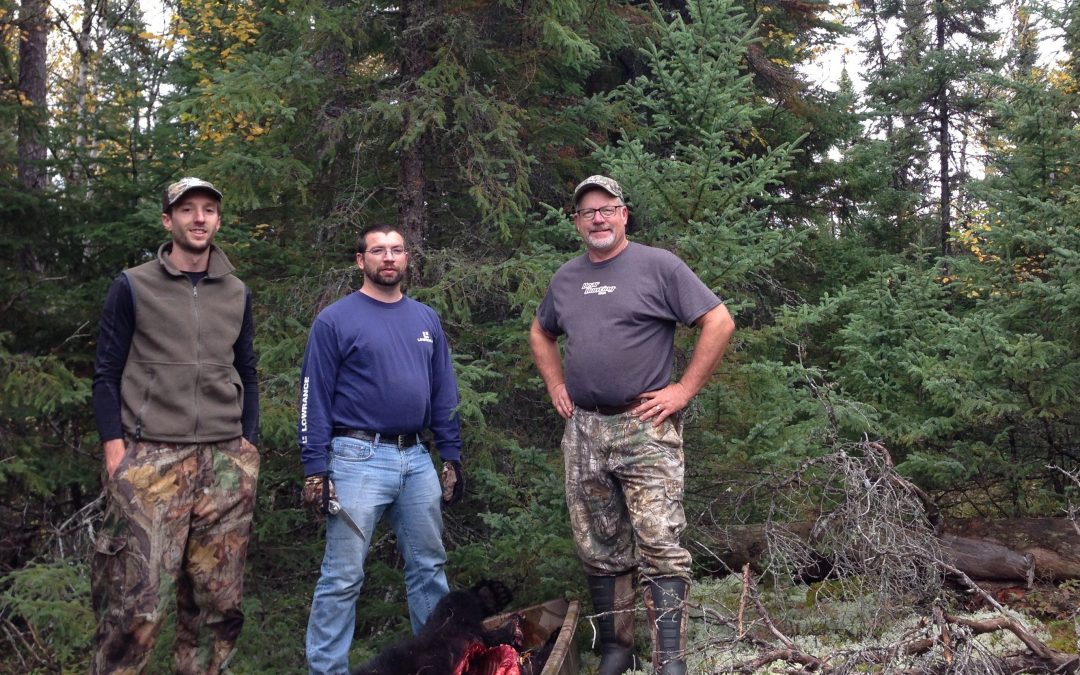 The darkness had settled over the Canadian wilderness. Light rain began to fall. We were following the blood trail of a bear I had just shot. It was my first time ever hunting bears. What did I know about tracking a bear in the dark? Wait, what did I know about bears at all?

Most of my life I had just run from bears. I didn’t even bother with playing dead. Playing dead was far too close to the real thing for my liking. There had been the bear looking in our basement window in Minnesota. My mother’s scream brought me out of the shower faster than my towel could follow, bringing another scream from my already frightened mom. Then there was the bear prowling around the outhouse in mountains of Montana and the bears blocking the path while out running. But in none of those experiences had I ever purposely angered the bear. Now I had put an arrow through one and I was pretty sure he had no intentions of extending any offers of friendship…and it was dark.

It was only a few weeks earlier that my father-in-law had called and told me I was going hunting with him. I don’t remember that there was a question involved, but he had good judgment and knew what he was doing. He had let me marry his daughter after all.

I fancied myself a fairly experienced hunter. I had shot a few deer, plenty of squirrels, and a handful of stumps that appeared rather aggressive in the early dawn on opening day. I would be fine. But then he said I would be hunting with a bow. Apparently his judgment was waning with old age.

I wasn’t entirely sure what to expect on the hunt. I had two competing visions of bear hunting in my mind. The first vision revolved around a crazed mountain man stalking a grizzly with only a knife between his teeth and a Chuck Norris eye-squint (both of which are deadly, by the way). The second conception involves a hunter sitting by a dumpster full of candy, and then shooting the poor creature when it isn’t looking. I was soon to learn that neither idea was anywhere near accurate. There is much more work to do in bear hunting than I had imagined, even including all my eye squinting practice.

But when I first began I had no idea what to expect, and that was a good thing. Otherwise I probably wouldn’t have gone. A week before leaving for the hunt, I went over to my in-laws to figure out the gear I would need. I utilized the time to show off some of my archery skills I had perfected over the previous couple of weeks.

“I have been shooting a few times a day at various distances.” I told my father-in-law, trying to keep my boasting voice to a minimum. I was pretty impressed by my progress and so was he. After watching me shoot, he even recommended I take the suction cups off and start practicing with a real bow. Again, his judgment was waning.

Driving into the northwoods and setting up camp is an experience in itself. Fall in southern Canada can be gorgeous. The leaves are showing off their final colors before falling. The lakes are clear and cool. The darkness of the wildness interrupted by the evening campfire is incomparable. Of course you also have to put on every piece of clothing you own in order to keep from freezing to death in your tent, but that is a worthy price to pay. The northwoods are beautiful even when they are trying to kill you.

There were three of us in camp, my father-in-law, my brother-in-law, and myself. I soon came to realize that I had been brought along on this trip for one of two reasons. At first I figured they needed someone with a keen wit and nearly inexhaustible outdoor expertise, which I obviously contributed to this hunting party. But the truth hit me after I saw how much food they were feeding me every day. I was the bait.

Climbing into the stand the first evening, I prepared myself for the evening. I had been honing my mountain man skills in the weeks leading up to our hunting trip and knew all the potential problems which could arise. One of the reasons I have been able to survive in the midst of nearly insurmountable odds is that I am a realist when it comes to potential negative outcomes. It is as though I can take stock of any situation, visualize what could go wrong, and then worry appropriately. I like to consider it my superpower.

For example, a bear could climb the tree. I could fall out of the tree. I could miss the bear and have it climb the tree while I was fumbling with another arrow. Or worse, I could actually shoot a bear and have to climb out of the tree knowing full well there was a disgruntled bear below me. For all these reasons I insisted that my father-in-law sit in another stand nearby. That way if a bear started climbing the tree after me he could put an end to the situation. I would rather go by his arrow than by an angry bear any day.

I am an extremely patient person, but even I wasn’t ready for the long, silent wait. I had finished off all the snacks I had brought, and most of my father-in-law’s. I was beginning to wish I could switch places with the bears, given that they had a barrel of bait they could dig into. “How long have we been waiting? Isn’t it almost dusk?” I whispered. My father-in-law looked at his watch and mouthed the time. I grimaced and shook my head. The poor guy had let his watch battery die. There is no way we could have only been up there for 25 minutes.

An indeterminable amount of time passed of snackless, cramped, nervous anticipation. And then my greatest fear came true. A bear actually walked out into the clearing. I glanced over to the other stand and got an excited nod from the guy in charge. “He must be pretty hungry as well,” I thought. I would have filled my tag with a porcupine had it meant I could get out of the stand.

I slowly drew my bow and took aim. As expected, I was calm, steady, and composed with icy precision and released my arrow as my sight bounced along the side of the mass of black fur.

I am not exactly sure what happened at that point since the bear didn’t stick around to explain it to me, but I do know I had upset him. My father-in-law was surprisingly excited, probably because he finally got to stand up and work out the cramps in his legs. I couldn’t blame him; it takes a lot practice to get to my level of mental fortitude.

But then he started to climb out of the stand, talking gibberish about finding the bear. Obviously senility had quickly overtaken him. “Well…just to remind you…” I said slowly, in case he was having a difficult time processing my words, “there is an angry bear down there. I think we should just wait it out till morning.” My wise counsel was quickly vetoed and I was forced to follow him down or remain in the tree by myself.

And that is how I found myself standing in the rain and darkness with nothing but a weak flashlight, a bow, and the realization of the series of very poor life choices which had brought me to this moment, namely, believing my father-in-law when he said this would be a good idea. But, being the thoughtful son-in-law that I am, I offered to stay at the truck and honk the horn at regular intervals so that my father-in-law would be able to find his way back. Yet my sacrificial offer was brushed aside and we traipsed into the woods.

There is more to the story, but the most pertinent facts can be summarized here. We were able to find the bear the next morning wedged in between two boulders, half submerged in a frigid lake, obviously having crawled there out of spite. But I can humbly say that the greatest accomplishment was my ability to make sure my father-in-law, Bernie Barringer, was able to survive another bear hunt. His judgment is questionable, after all.

Leave a Reply to B. Barker Cancel reply