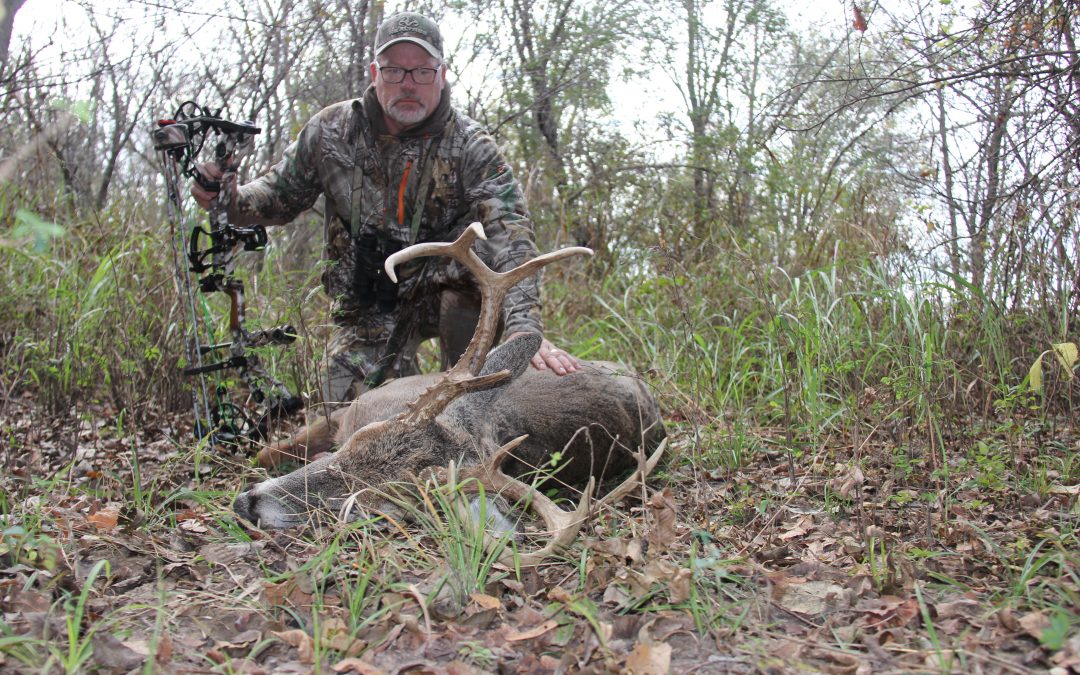 Ever have a hankering to see new country and hunt deer where the big ones live?  Heed this advice to fill your thirst for a DIY public land adventure.

Imagine it’s the 1990’s and you’re sitting in front of your TV in North Carolina, Michigan or Pennsylvania, watching a young Michael Waddell shoot a huge buck in the Midwest. You’re thinking, I could never hope to shoot a buck like that where I live. Many wide-eyed people had no idea mature bucks were available in good numbers, but these sights kindled a desire in hunters to experience it for themselves. The growth of outdoor TV and online videos created an interest in hunting whitetails in the destination states that has snowballed into a massive empire of outfitters and high-priced nonresident tags over the past couple decades. And the reason comes down to this: the grass actually is greener over there. According to the US Fish & Wildlife Service, more than 3 million nonresident hunting tags are sold each year. That’s triple the number of traveling hunters since the advent of outdoor TV and YouTube. There’s a tidal wave of people traveling to hunt.

Some people would rather hire an outfitter to experience excellent hunting, but others aren’t willing to pay the high price or prefer the satisfaction that comes with going it alone. I’ve done 25 DIY public land bow-hunting trips in eight states since 2006 and I’ve learned a thing or two about being successful in what I have termed, “Freelance Bowhunting.” If you’re interested in the challenge and thrill that comes with public land hunting in a state where you may bag a buck bigger than you’d ever shoot where you live, listen up, I have some advice that will help you make the decisions necessary to have a trip to remember.

But before loading the truck, you must first ask yourself a few questions, the most important of which is, “What do I want to get out of this?” Your ultimate goal may be to shoot a buck bigger than you’ll shoot at home. Or it may be to simply experience something new, see new scenery and try new things. Your goal may be to just enjoy some time away from home with friends or it may be to learn a new style of hunting that you can employ to make you a better hunter where you live. Maybe you would like to go hunt where the weather is a lot different than you’re accustomed to. These are all possibilities and no one can answer these questions for you.

Some states offer over-the-counter (OTC) nonresident whitetail deer tags, but others require an application process and a wait. Most hunting zones in Kansas can be drawn every other year, for example. Same for Montana and Wyoming. Iowa is the most extreme case; more than 20,000 nonresident hunters apply for the 6,000 tags each year. To draw an archery tag in the most desirable zones will take 3-5 years off applying and accumulating preference points. Your final costs to be fully licensed will run upwards of $750. Iowa has the goods and hunters continue to pay up.

Generally, states that have the most desirable whitetail hunting offer limited entry for nonresidents and higher license fees. And let’s face it, most people don’t go to the trouble and cost of an out-of-state hunt for a yearling buck or a fat doe. Antlers are the draw, like it or not. States that produce the most B&C and P&Y bucks have the most to offer the nonresident hunter.

I spent a lot of hours going through Pope & Young statistics by county in the 16 states I consider to be “destination” states. I mapped those counties within each state and published the results in my book The Freelance Bowhunter. What I found was there are areas of each state that produce the most big bucks. These were also the areas where the buck tags are most desirable and difficult to draw. But there are some interesting pockets of great deer hunting that are not common knowledge and don’t get the press. And some of them are in states with OTC tags. Doing your research is worth the time.

Missouri is an example of a state with abundant public deer hunting land, and with an OTC tag at a bargain price of $225, it allows the hunter to take two deer (one antlered) and two turkeys. Because of this, the public hunting areas get a lot of nonresident pressure, particularly those near the Iowa border. I’ve pulled into a parking lot of a public hunting area in the Show-Me state and counted a dozen trucks with license plates from half a dozen different states. Ohio would be another state that falls into a similar category. There is lots of public land, good numbers of mature bucks and high numbers of hunters.

States like North Dakota, South Dakota, Oklahoma and Nebraska offer good hunting with reasonable OTC tags, and enough land to find some elbow room if you work at it. The ratio of public hunting land in comparison to the number of hunters is in the favor of the traveling hunter. On the other extreme is Illinois, where public land is crowded and tags are expensive. Want a sleeper? Indiana. Cheap deer tags, good numbers of mature bucks and decent amount of public land which is mostly broken up into small state and county management areas, plus some large federal areas along rivers and reservoirs. It’s not in the top ten of most traveling hunters’ lists but it deserves another look.

Here’s another tip: Some states have programs into which private landowners can enroll their land as public hunting areas. Examples of these are the block management areas of Montana, Private Land Open to Sportsmen (PLOTS) of North Dakota, Walk-In Hunting Areas (WIHA) of Kansas, and many others, you get the idea. While most of these programs are designed to provide upland bird hunting opportunities, they really benefit the deer hunter who is willing to spend some time on aerial photos to find the honey-holes.

Once your research has helped you narrow down the state and some public areas within the state, the best way to learn about the hunting pressure and the opportunities is to make some calls. Talk to land managers, biologists and game wardens. They’ll have a feel for things like the quality of the hunting, the amount of local and nonresident pressure found there and of course even things like if food plots have been planted and deer population cycles.

There are a lot of options and locations. In my opinion, the best hunts fall into three categories, early season bowhunts, rut hunts and late season bow or muzzleloader hunts. Each of them have their appeal, and trade-offs. Rut hunts on public land can be when you see the most hunting pressure. However, the first two weeks of November provide the best opportunity of the year in the Midwest to catch a mature buck on its feet during the daylight, and everyone loves the action associated with the rut.

Despite the numbers of nonresident hunters in the Midwestern at that time, you’ll find me in the woods, because it’s so worth it. I have learned to analyze where most hunters spend their time and how bucks adapt to it, which has helped me find holes in the pressure that the deer know about.

Another peak time is the late season. Many states have archery and muzzleloader seasons that run until the end of December and even into January. In the northern Midwest and great lakes states, harsh weather and snow cause the deer to bunch up around the available food and their patterns become quite predictable as they seek out the high-carbohydrate foods that they need to keep warm in these environments. This presents the hunter who’s willing to bundle up and brave the elements with some high-percentage hunting opportunities.

Possibly the most overlooked peak time for a bowhunting road trip is the early season in many states. Kentucky, North Dakota, Montana, Wyoming and South Dakota are among the states that offer archery deer seasons opening on or about the first of September. At this time the deer are quite visible; they’re focused on daily food to bed routines; and they’re not thinking about hunters. A savvy hunter can arrive a couple days prior to the season to scout and catch a buck completely unaware on opening day.

It’s one of my favorite times to hunt because of the sheer number of deer that can be seen and of course the opportunity to scout and hunt in shirtsleeves. Plus there’s always the chance to shoot a buck before he loses his velvet, something that’s on the bucket list of many traveling hunters.

If you’re from the eastern half of the US, a hunt in the Great Plains States can really scratch your itch for experiencing an entirely new kind of hunt. Hanging a stand in a 300-year-old Montana cottonwood the diameter of a VW beetle while watching 60 deer feed in the alfalfa isn’t something you’ll experience many other places. Likewise, a hunt in the snarly crooked trees of a North Dakota Shelterbelt can be quite an experience because it’s so difficult to find a tree to hang a stand. I learned this the hard way when I first went to North Dakota to hunt the Army Corps of Engineers public land surrounding the Missouri River reservoirs. Ground blinds turned out to be key along with a ladder stand that can be fastened to just about any crooked tree. Another reason to do your research before you go.

And of course the hardwood forests of the states bordering the Mississippi River can offer a challenge to learn deer movements, but once you get a handle on how these deer use terrain, you can park yourself in a stand in a good spot for hours upon hours with the knowledge that the biggest buck you’ve ever seen in your life could walk within range at any moment.

Don’t overlook the value of crossing a nearby state border for a weekend hunt. You may or may not live in a good deer hunting state, so why not just hop over next door for a hunt in a new area. This may give you the opportunity to scout more and also may offer you the chance at a weekend hunt rather than using up a week of vacation to travel far and wide.

Here’s the best piece of advice I can give you: Just go. Do some research and pick a spot to go. Your first trip may not produce a buck, but if you go with an attitude that you’re going to enjoy the experience and learn some things, you will be successful. And if you decide to keep going, your odds of coming home with a nice buck in the back of the truck go up each time you hit the road on a DIY public land hunt.

SIDEBAR: The Freelance Bowhunter The author’s 200-page book The Freelance Bowhunter: DIY Strategies for the Traveling Hunter contains loads of information about finding and hunting mature bucks away from home, especially for those who want to do it on a budget. It also contains details for the nonresident hunter on 16 destination hunting states. Click the cover to see more.