Unreal Quest for a Barebow Bison 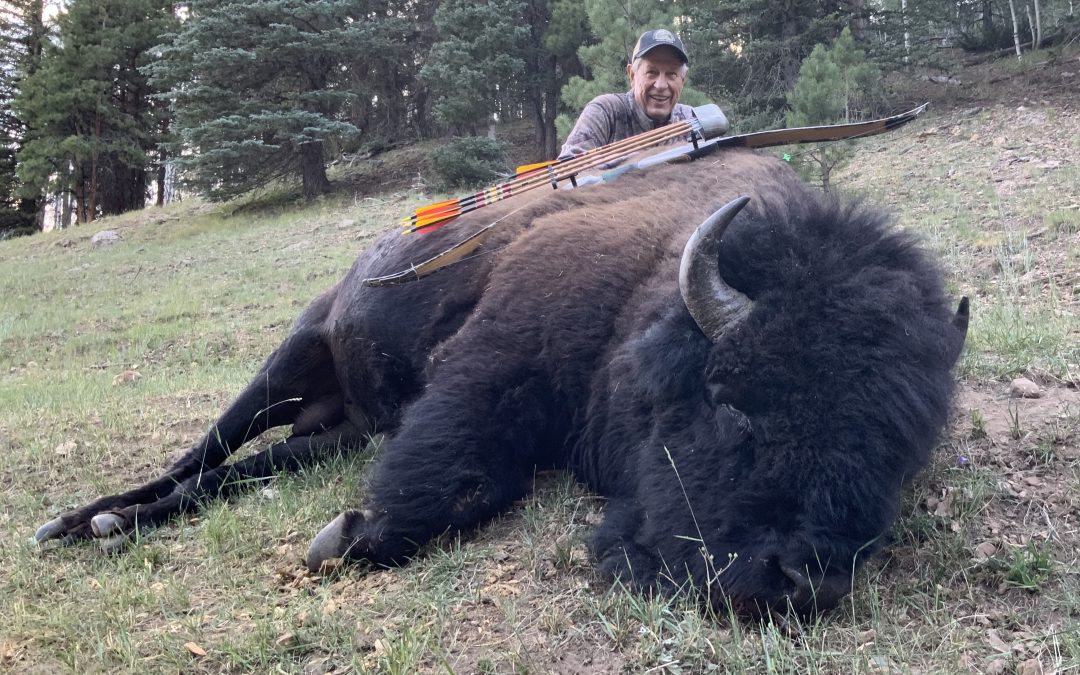 Editor’s Note: This came from Dennis Dunn, who is most probably the most accomplished barebow archery hunter ever to walk this earth. He was the first to bag all 29 North American big game species with a bare bow (no sights or aiming devices.) He is now in his 80’s and trying to raise all his 29 animals into the Pope & Young record book. A lofty goal indeed. Here’s his account of a grueling hunt for a P&Y bison.

I just returned from Arizona after one of the most remarkable hunting adventures of my lifetime.   For 66 days, total — in unbroken stints of 35 and then 31 days— I spent the summer of 2020 self-quarantining in a Double Bull blind, in an upright chair, for 12 hours a day.

My goal was to harvest with my recurve and a wood arrow a true “Pumpkinhead” old bison bull near the end of his life.  I wasn’t sure my 80-year-old spine was going to survive the endurance marathon, but somehow it managed.   Over the past dozen years or so, virtually all of the House Rock bison herd has migrated up onto the Kaibab Plateau and into the northern half of the Grand Canyon National Park — where, of course, they can’t be hunted.  Because the herd has grown to over 1200, by Park Service estimates, both Arizona Game & Fish and the Service encourage hunting for them from blinds over salt  — situated in close proximity to the northern Park boundary.

The various salt locations are stretched out over about 25 miles on an East/West  axis, more or less parallel to the boundary.  They are all maintained by a phenomenal outfitter named Russ Jacoby, of Flagstaff, AZ.   The bison are hunted virtually year-round, and almost all the bison killed are taken from blinds now; thus the animals are very afraid of being outside the Park.  “Spot & Stalk” is impossible because they get shot at all the time, and most of their visits to the salts are nocturnal.  Occasionally, however, they give in to their craving for salt, make a mistake, and sneak across the boundary during daylight hours — especially when it is very hot, or during the dark-of-the-moon periods.  That is what provides the patient hunter an occasional opportunity.

AZG&F advertises the hunt in their Regs as one of the toughest hunts in the State — and definitely not for everyone.   During my 66-day “sit,” I passed up several lesser Pope & Young bulls, holding out for one of Boone & Crockett quality.  The one I ended up harvesting on August 11th (three days before my tag was to expire) grossed green 115 1/8th, B & C, so it is not quite going to make that Records Book, but it will score high up in the P &Y Records.  The harvest of this trophy bull now puts me within one, single species-“upgrade” of the first-ever, BAREBOW, all Pope-&-Young Super Slam.  Tom Hoffman, Jack Frost, Walt Palmer, Randy Liljenquist, and Edwin DeYoung have all recorded all 29 species in the P & Y Records, but no one has ever done it without yardage sight-pins attached to their bows for aiming.

Being now in my ninth decade of life, I realize I’m in a race with Father Time.  Next year — with God’s blessing — I hope to harvest a trophy-quality Alaska Barren Ground Caribou, to complete my quest.  It will be my eighth hunt for that species.   The bull pictured below weighed nearly 2000 pounds (in the estimate of Russ Jacoby).  With God’s guiding hand, my Suzanne St. Charles’ fir arrow (800 grains and tipped with a 225-grain Tuffhead broadhead) transfixed both lungs and completely severed the pulmonary artery in between them.  As a result, the bull suffered instant, massive, internal bleeding and died within seconds — traveling only 18 yards.  Providential assistance?  You bet!  I’ll accept it anytime it’s offered.