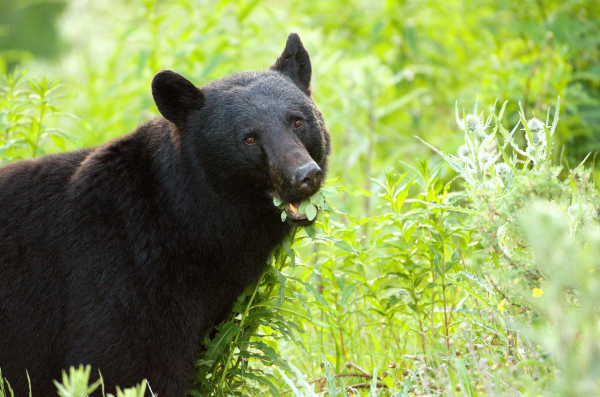 Spring brings green-up, rushing rivers, and first rays of sunlight that warms one’s bones. In the west, it is the first opportunity for many sportsmen to shake off the winter cobwebs and start hunting species with spring seasons. Though the vast majority of the United States have seasons available in the fall, there are eight western states (Alaska, Arizona, Idaho, Montana, Oregon, Utah, Washington, Wyoming) where one species stands to provide the largest and most challenging spring harvest of all – the black bear.

Black bears have reaped the rewards of the North American model of wildlife conservation as much or more than many other big game species. In a live interview with Wyoming Wildlife Federation, the Western Bear Foundation’s President, Joe Kondelis pointed out it’s one of the few species in North America where population levels may be higher than pre-European contact. The abundance of bears, the delicious table fare they provide, and the challenge to the sportsmen pursuing them all make black bears an excellent spring hunting opportunity.

People may balk at the idea of eating an animal known to be a predator – it’s often a reflection of how humans have identified bears as having human-like qualities. The extreme anthropomorphization of black bears may have prevented folks from looking at the species as table fare, but those who have tried a well-done bear recipe will agree – black bear meat is excellent.

Being closely related to the pig family, black bears are used in various pork-like recipes, like pulled pork sandwiches, cured hams, and grilled tenderloin. Summer sausages, salami, and pepperoni are incredible uses of bear meat for people wanting to take their at-home charcuterie skills to the next level. It’s popular to cook bear meat “low and slow” due to the higher fat content and necessity for bear meat to reach an internal temperature of 160 degrees, as a preventative for trichinosis.*

Not only does harvesting a bear lend delicious meat to the dinner table, but the challenge of pursuing a spring bear is incredibly rewarding. In all western states with a bear season, folks go after black bears via spot and stalk methods. Generally, this includes grabbing a high vantage point that overlooks a bear’s primary food source and waiting, usually multiple days, until a boar or sow without cubs feeds into a position to make a clean shot.

Early in the spring in western states, bears are coming out of winter dens in search of the highest quality and most readily available nutrition they can find – fresh grasses. The grass comes up near water sources and snow line. It’s the kind of feed that would make the most conscientious grass-fed beef rancher jealous. As spring moves along, bears feed on other naturally occurring plants like skunk cabbage roots and wild onions. Towards the end of spring and early summer, bears can be found cruising elk calving and doe fawning sites in search of a larger, easy-to-capture meal.

In a few western states, like Alaska, Wyoming, and Idaho, it’s also allowed to bait bears as a method of hunting. Bear baiting is highly regulated with strong guidelines for the hunters choosing this method but can be extremely effective. Bear baiting generally begins days, if not a couple of weeks prior to hunting for bears and involves incredible amounts of time commitment to keep the bait-site stocked and maintained. Not to mention, the sites can be a decent hike from any available roadway.

The areas where bear-baiting is allowed usually have a significant surplus of bears to be harvested. Plus, the commitment it takes for hunters to be successful while baiting allows many people sitting bait sites to be very selective in their take of a big black bear. As Joe Kondelis also points out, bear genders are difficult to distinguish. Baits give hunters an opportunity to identify larger boars to harvest. More boars can be removed with fewer impacts on the future population of bears in that area, as well as making a great trophy and yielding more meat for the freezer.

At the end of the day, any chance to get outdoors this spring seems like a welcome opportunity in these COVID-19 restricted times. Spring bear hunting offers the perfect chance to social distance, watch the bright yellow flowers of skunk cabbage bloom, and enjoy the challenge of taking a bear. Heck, successful hunters may just cut down on some trips to the l grocery store with a freezer full of high-quality game meat to-boot.