The biggest typical whitetail ever to walk the earth? 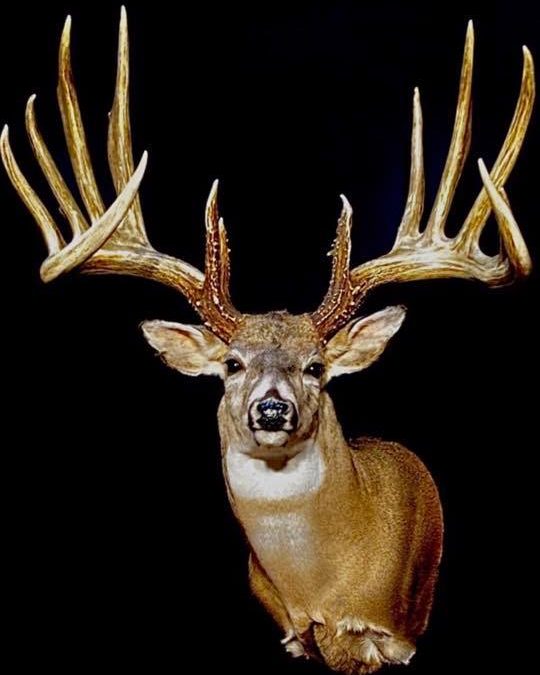 Hundreds of factors must come together in one shining moment for a buck to reach world record caliber. A long line of big antler genetics must funnel down through the generations into one female deer. This doe must have hit the genetic lottery with a series of big buck sires in the females of her family tree. Then she must breed with a gigantic buck and she must produce a buck fawn, otherwise, all this genetic information will have to be delayed one more year.

Then, of course, this buck fawn must escape the myriad pitfalls that lay out before him. He must escape coyotes, cars, farm equipment and of course hunters. He must live an idyllic lifestyle in comfort with excellent nutrition readily available, and he must do this for five or six years. If all these things come together, out walks a buck carrying a rack larger than the millions and millions of bucks who have come before him.

This all happened on a ranch in Nebraska in the 1950s. A rancher who will remain unnamed had seen three gigantic bucks on his property during the fall of 1958. There was no hunting in Nebraska at that time, the first modern day hunting season for whitetails would not occur until the following fall of 1959. Whitetails had been off limits for half a century and they were expanding their population. The age structure was balanced, with many mature bucks.

In the spring of 1959, this rancher was tending to his cows, which were calving at the time. He walked into a patch of brush to retrieve a newborn calf and discovered two gigantic shed antlers lying a few feet apart. He later sawed off the back of the burrs so they would fit flat against a wall and screwed them above a doorway in a back room of his farmhouse. There they hung for many years.

In the mid-1990s, an outfitter named Tim Condict was talking to ranchers in the area about leasing land for hunting when he asked a rancher if he had any big racks or shed antlers lying around. The rancher said, “No, but the neighbor across the way has a set you aren’t going to believe. I’ve seen the big bucks in the Cabela’s store and they ain’t got nuthin’ like this one!”

That led Tim to the set of sheds that would become known as The General, the largest typical sheds of all time. Details of the transaction which caused those antlers to leave the farmhouse for the first time in 37 years are not known, but the gigantic buck would finally become known to serious whitetail collectors and big buck lovers.

The buck’s main beams are both over 32 inches and mass measurements are as high as 7-1/2. When mounted in a position that they look natural, they have an inside spread of nearly 24 inches. As it is, the buck scored 240 gross typical and nearly 219 net, more than five inches larger than the current Saskatchewan world record held by Milo Hanson. But the shrinking effects of a warm, dry Nebraska farmhouse have taken a large toll. No one, of course, knows exactly how much, but many antler collectors have some estimates.

Antler collector Dick Idol said about the buck, “It’s hardly fair to compare such a rack to a recently harvested one kept indoors from the time of skinning for the short 60-day drying period and then officially measured for the record book. Just in shrinkage alone, these Nebraska sheds could easily have lost as much as 6 to 8 inches in total measurement, especially in this type of rack, which still has 32-plus-inch main beams and a conservative inside spread of nearly 24 inches. Another 8 to 10 inches overall, which this buck conceivably lost, would have put him at 226 1/8 to 228 1/8 net, had the antlers been measured soon after being found back in 1959.”

There have been some other giant sheds found that would be contenders for the world record if the buck was shot by a hunter. The “Kansas King” theoretically scores 217 as a typical with a spread credit included. One of side a giant Iowa buck was found that scored 112 typical. Even with a small spread credit of 20 inches you are looking at a 244 gross typical. It makes you wonder what might have been. And is there a buck out there now that hit the genetic lottery? One as big or bigger than The General?