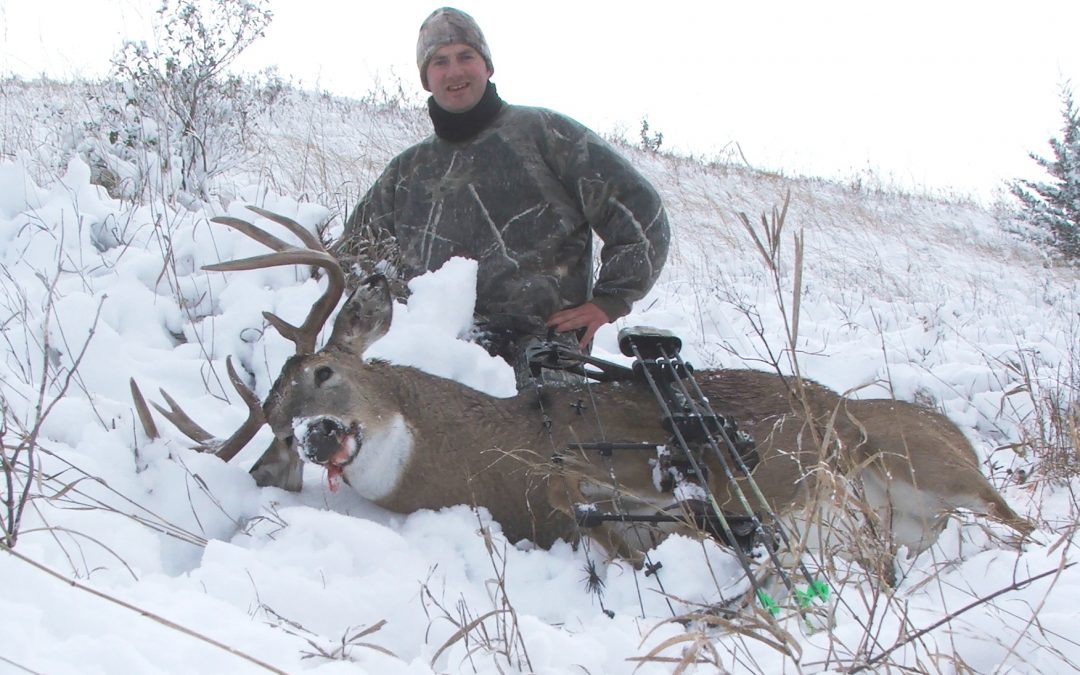 The rut and the gun seasons are over, and gone with them is the helter-skelter buck movement. Now the deer are focused on the available food; they need to replace fat reserves. In the opinion of many deer hunters, it’s the best time of the year to shoot a big buck… if you can take the cold.

Many bowhunters consider the early season the best time to hunt deer, and with good reason. The deer at that time are undisturbed, they can be found in somewhat predictable daily movement patterns and the weather is nice for sitting in a treestand. The rut and the gun seasons open up and the normal patterns go out the door. Bucks are running around helter skelter and hunters either figure out how to take advantage of the conditions, or just sit home and wait it out.

The majority of bowhunters who have an unfilled tag in their pocket just hang it up and wait until the following year to go after it again. That’s a big mistake. When the gun seasons end, most states offer late season bowhunting that lasts until the end of the year, and in some cases, well into January. When the gun hunters go home to watch football, the deer quickly return to daily patterns that involve taking in lots of calories. The rut is hard on them, especially the bucks which have significantly depleted their summer fat reserves and they will need to return themselves to good condition as soon as possible in order to survive the harsh winter conditions.

In my opinion, the bucks can be found in their most predictable patterns of the year at this time. They need high-carbohydrate foods; they need a lot of them and they will focus on food at this time even at the risk of exposing themselves more during daylight than at any other time of the year. If you can find where they are bedding and where they are feeding, you can easily capitalize on this situation by ambushing them in between the two places.

One of the best ways to discover their daily movement is by long-range observation. A good spotting scope or at least a good pair of binoculars is an important tool to monitor their movements. The deer will have to cross open areas to get to the feed in the evening and back to the bedding areas in the mornings. Often, the deer are feeding in open areas such as harvested crop fields, food plots and open timber with mast crops on the ground. Their visibility allows you to pinpoint where they are entering the fields. Spend some time with some good glass and you will have a good idea where to set up by learning where the bedding areas might be.

The feeding areas may change from day to day, but if there is food available, the buck will be back. Just because he is a no-show on any given evening doesn’t mean he has left the area. If there are does and small bucks still using the fields, he is nearby. There’s a good chance he has just chosen a different bedding area for that particular day so it pays to understand why bucks choose to bed where they do.

Bucks will use two primary types of cover to bed in during the day. On sunny days, they will most likely be bedded on the south sides of slopes where they can take advantage of the sun’s warming rays. When the weather is bad, say cloudy and windy or snow is coming down, they are more likely to be found in the thickest snarliest cover around. Knowing where these two types of cover are found will help you choose the stand location where you will eventually waylay the buck.

They key of course is to get as close to the bedding area as you can without tipping them off to your presence. Too many hunters observe where the buck tends to enter the field and then set up a stand on the edge of the field right where he enters. That can work, but more often, the buck may hang up off the field edge for a while before entering. By finding the trail he uses from the bedding cover he has chosen for that day and setting up on the trail, you significantly increase your odds of getting a shot at the buck well before dark.

The nastier the weather the more the deer move and the earlier in the day they move. That’s bad news and good news for the hunter. Days are short in the late season, so bad weather can influence deer to move earlier, which improves the odds that they are going to walk by your stand during legal shooting hours. That’s the good news.

The bad news is that the couple hours spent on stand at this time of the year can be downright brutal. Aching toes and shivering shoulders can make a hunter long for the early season. There are ways to beat the cold, including hand and foot warmers, body bags—which are like sleeping bags that allow you to unzip and ready for a shot with a minimum of noise and motion. Some of these even have heater elements built into them.

I have begun to use ground blinds more and more for late season hunting. They keep the wind off you and if you really want to add comfort you can add a small propane space heater such as the ones used for ice fishing. One drawback of ground blinds is the need to put them out early and hide them well by covering them with things that are natural to the area. A ground blind just plopped down in the open will make the deer uneasy, often for a week or more. You must hide them well in order to have success with them quickly.

So if you have an unfilled tag in your pocket, you might be tempted to watch a football game from the warm couch instead of getting out there where the opportunity to bag a big buck or at least secure some venison awaits. Once you are rewarded for toughing it out in the late season, you will look forward to the late season when the last minute bow bucks are vulnerable to the savvy but tough hunter.