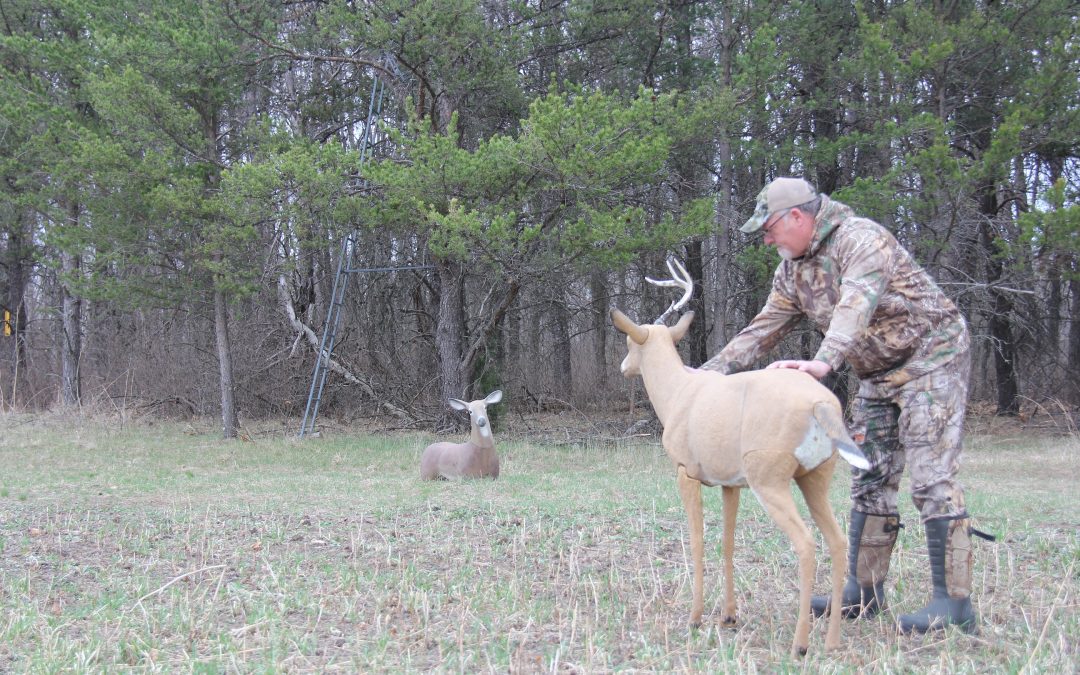 Many hunters have a negative view of using a decoy in their deer hunting. There are a couple reasons this is the case: It’s a lot of extra work to haul it to your hunting area and set it up. Many people have used decoys and had a negative response from deer while using them.

I was once one of those hunters, but I now use a decoy quite a few times each year, especially during the rut. So I suppose my first task is to convince you that using decoys are worth the extra effort and trouble. Here are four quick reasons I am a firm believer in the use of the right decoys in the right places at the right time. First, a decoy can bring a buck across a field that may be well out of range. Secondly, a decoy will focus the attention of the buck away from the hunter. This is huge advantage when calling or rattling. Third, a deer already in the field may give a buck the confidence it needs to enter the field before dark. And fourth, a decoy can be a great tool to position a deer for a shot.

Each of the three decoy setups I am about to describe have been refined by my experience to take advantage of those four factors. Each of these setups uses a buck decoy, and two of them include a doe decoy with the buck. I have had too many bad experiences with doe decoys alone, so I never use a doe decoy unless it is positioned with a buck decoy. Bucks and does alike are alarmed by stationary doe decoys, but when a resident doe comes across a doe (the decoy) who will not communicate or acknowledge her presence, it freaks her out. The encounter usually becomes a foot-stomping, snorting, tail-flagging affair within a few moments of the encounter. This puts the other deer in the area on alert.

The vast majority of times I use a decoy setup will be at the edge of a field or clearing of some sort. So here are the three decoy set-ups I use the most and the explanations of why I believe they work so well.

I cannot take credit for the idea of using a buck decoy with only one antler, but I have been using it for 20-plus years and it has been a game changer for me. I hate to use the word “always” but in that two decades of using this method, I have never had a buck that didn’t approach the decoy from the side missing the antler. A buck approaching this decoy moves towards its weakness, which is a big advantage in causing the buck to turn broadside for a shot.

Prior to using a decoy with one antler, bucks would almost always begin to circle downwind of the decoy. Small bucks such as yearlings who are curious about the decoy may still circle downwind at a distance, but if they decide to close in, they too usually work around to the side without the antler before approaching.

I position the decoy so he is looking towards the bottom of my treestand. Larger bucks—three years and older—will normally bristle up at the sight of the decoy and walk stiff-legged towards the buck’s head, this turns their attention away from you so you can draw your bow, and puts them broadside within bow range. Perfect.

This ruse involves the use of a doe decoy and a buck decoy right behind her. I put him as close as I can get him to the doe, and I like a buck decoy that’s large enough to put his head on top of her rump which creates the illusion that he is about to mount her. Any mature buck who sees this cannot resist coming in hard and fast. In fact, most of the times I have had a buck actually attack the buck decoy involved this particular setup.

When setting this up, keep in mind that an approaching buck is coming in with the objective of breaking up the couple. He most likely will approach towards the space between the deer. I have seen them walk up and use their antlers to nudge the buck decoy in the shoulder or the neck. In one case, a younger buck simply tried shoulder the buck decoy off to the side and get between the two to mount the doe.

I generally set the decoys up quartering towards me with the wind at their back if possible. Bucks that tend to circle around the decoys to get a sniff will be moving towards your position, but with their full attention focused away from you and on the decoy. It’s hard to imagine a better position to be in for a bowhunter.

Since mature bucks typically run right up to this setup, you’ll need to be ready to get a shot off quickly. If they do not contact the decoy early in the encounter, they begin to circle and quickly become alarmed if there is no acknowledgement of their presence. While this fake-out really brings them running, it is the quickest one to break down when the buck figures out something is wrong. Usually the first indication that something is wrong takes place when they get downwind of the decoys and their nose isn’t confirming what their eyes are seeing.  Take your first shot opportunity.

I came up with the idea for this setup because I had seen the real thing so often. When a doe is about ready to breed, a buck will often try to push her out into an open area where he can keep an eye on her and more easily defend her from other bucks. That’s why you see bucks standing with does out in the middle of open fields in farm country during the peak of the rut. When the doe lies down to rest, he will stand there for long periods just staring at her.

The doe’s nature is to lie down beside something such as a grassy fencerow, a brushpile or the edge of the field. This habit makes the edge of a field the perfect scenario for setting up this simulation. I use a decoy without legs so she sits nicely on the ground in the grass, then position the buck decoy about ten yards from her. I want the buck within 30 yards of my position so I am offered a nice easy shot.

Smaller bucks seem to be leary of this frame-up and will mostly circle the area at a distance. Sometimes they will be bold enough to approach either the doe or the buck and stretch out their neck for a sniff, but it seems like they are mostly satisfied with looking it over for a while before leaving.

Larger bucks will approach the buck decoy much the same way as they do the One-Horned Wonder. For this reason I use only one antler to help position the buck. They tend to focus their attention on the buck decoy and pay little attention to the doe decoy. I suppose they instinctively know they have to deal with the buck to get to the doe. Of course, if it’s a shooter buck, I never let them get a chance to seal the deal so I do not really know how this scenario would play out to the end.

I love calling and rattling over this phony breeding scenario. Once a buck comes to the call, he sees the decoys and forgets all about the source of the sound. Stop calling the moment his eyes lock onto the decoy. He’s all yours if you want him, just take the first available broadside shot.

If you are a skeptic about decoying deer, these three decoy setups will change your mind. Experiment on your own with additional ideas. I am still learning as I go, and I suspect I will continue to tweak my decoy techniques in the future. I expect to shoot a big buck over a decoy every year, and I am successful doing so just often enough to keep me doing it. Once you have had a big buck walk within range all bristled up and breathing hard, you will be as addicted to using them as I am.

A whitetail buck trusts his eyes, but he lives or dies by his nose. If he smells human scent on your decoy, your opportunity for a shot is over. Same is true if the decoy smells like your garage or the back of your truck. I use two methods of overcoming the deer’s tendency to circle downwind of a decoy. Number one, I spray the decoy down with Scent Killer to removed foreign odors. Secondly, I add some scent. Two things I have done with success are hanging a key wick soaked in deer urine and attaching a tarsal gland to the decoy. I use a string to attach either one to the tail of the deer or hang it around the neck. Either seems to work equally well and may be just enough to put the buck at ease.

I often use a drag rag soaked in doe-in-heat lure as I walk to the stand site, then simply attach the drag rag to the tail of the decoy when I arrive.

One of the biggest drawbacks to presenting a convincing illusion is the lack of movement or action in the decoys. One way to overcome this is to position the tail at half-mast. This seems to create the ruse of action. If your decoy allows, position the ears in an aggressive attitude, Or face one forward and the other backwards, which is another way to create illusion of action.

Yet another way to create actual movement is to hang something on the rear of the decoy near or on the tail. You don’t want something that will flap around in the wind and look unnatural; you just need the slightest movement to be convincing. A key-wick with scent, a small piece of white cloth or even a square of toilet paper that moves subtly in the breeze is enough. Go with the low-key approach, less is better when it comes to movement. Deer move in very predictable ways and unnatural movement is worse than no movement at all.