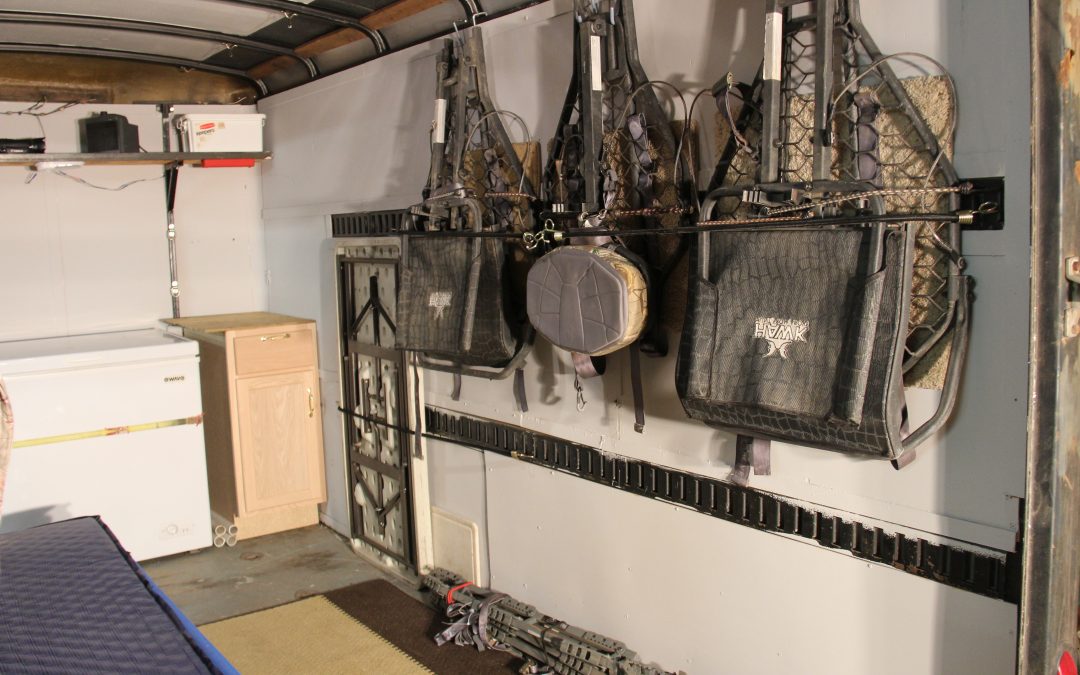 I rolled into my driveway late at night, exhausted from long hours of driving. Fourteen days earlier when I had left home on Halloween, my pickup truck was neatly organized, with stands, sticks and equipment stacked in place. Accessories had been packed neatly in Rubbermaid totes. But as I dropped the tailgate and looked into the back of the truck by the beam of the yard-light, my first thought was that someone ate a Cabela’s store and puked it up in the back of my Ford.

And I had to deal with it right away. Somewhere near the bottom of that mess was a buck, wrapped up in a tarp with three bags of ice inside it. It was going to be a long night. There must be a better way.

Events like this started me on the path to thinking about a trailer that could be used for my DIY hunting adventures. Over time I developed a plan in my mind, thinking about what I would like to have that would make my life easier when on a hunting trip. That plan came to fruition last fall when I bought a trailer, and during this winter when it became my project to convert it into a functioning trailer to haul my hunting gear with some additional features.

First I knew I wanted to be able to butcher a deer and keep the meat in good shape for the trip home, or the trip to my next hunting destination. One of the biggest issues I have run into in the past was shooting a deer on the first stop of a two- or three-state hunting trip. What to do with the head, hide and meat can be a real problem. Once everything is frozen, even when the freezer is unplugged it will stay frozen for about two to three days depending on the outside temperature. If you open it, cut that time by about three hours each time you open it.

In the past I have used a travel trailer to camp in, and that helped solve some of the issues. I put a small chest freezer in the front of the camper and butchered a deer right there. But I have found myself less often taking a camper on these trips. It seems to be harder and harder to find a place to camp during the hunting season. Problems with water and sewer freezing are no small matter. I wanted a utility trailer with a freezer in it and a place to butcher a deer, at least to quarter it.

At other times, I found myself hunting far from a place to sleep. In western Nebraska, I came out of the woods at dark and my motel was more than an hour away. I needed to be back there well before daylight in the morning. I considered sleeping in my truck; but, at that point, the idea of having a bunk to crash in sounded much better than driving nearly three hours of the next eight.

These factors weighed into my choice to build a trailer just the way I wanted it. When looking for a trailer, I knew I wanted one with a ramp door in the back rather than the swinging barn doors. I don’t take an ATV on DIY hunts often, but when I do, I wanted to be able to put it in the trailer. Plus the ramp door just makes it easier to move stuff in and out of the trailer.

I looked at new trailers, but decided my budget would be better suited to a good used one so I started looking online. I hadn’t really thought much about a side door except that I knew I wanted one. Most of these trailers have a side entry door on the curb side. When I found one that had a door on the driver’s side, I knew that’s what I wanted. It’s a lot easier to just walk back from the truck and open the door when you do not have to walk all the way around. I find that I am grabbing something quick out of the trailer so often that this has proven to be a good choice.

I finally settled on a 6-foot wide by 12-foot long trailer and bought it. This past winter, my buddy Ron offered me the use of his heated shop to pull the trailer indoors and remodel it the way I wanted it to be. I was grateful for that as the temperature dipped to -18 during the week I worked on the trailer in his shop.

The previous owner of the trailer used it to race go-carts. I first tore the old grubby shelving out and painted the interior an off-white color. At Menards, I bought two kitchen cabinets, one is an overhead, the other a corner cabinet. These did not have any latches on the doors or drawer, so I bought latches and installed them so they would not come open on the roadway, allowing their contents to fall out onto the floor.

Each of the cabinets was installed in such a way that they were screwed to the vertical steel ribs of the trailer’s sidewall. The paneling is not strong enough to hold them. They nicely hold the accessories that I need on DIY hunts, it’s much easier than digging through totes.

Next, I installed the chest freezer in the front of the trailer, using a ratchet strap to keep it in place. The trailer had lighting but it was poor, so I went to an RV dealer and picked up some new LED overhead lights. I installed one in the middle of the roof and one over the top of the freezer so it’s easy to see the contents.

I installed a 12-volt Deep Cycle battery for DC power, and ran the lights to it. The lights and battery are connected to the truck’s battery when the truck is plugged into it, which keeps the deep cycle battery charged. I also installed an outlet strip which can be plugged into 110V AC power when I am parked where electricity is available. This also allows me to use a generator. I will probably install an onboard boat battery charger that will top off the battery each time it’s plugged into AC power.

On the driver’s side of the trailer wall, I installed some hooks for hanging clothing, an extension cord, etc. On the other side, I installed hooks into the angle iron that runs along the top of the wall. On these I hung three treestands and fastened them with bungee cords so they do not flop around during travel. I used a square carpet remnant—usually available at no cost or low cost at any carpet store—to protect each stand and the wall from vibration.

This trailer can be set up several ways. I tossed a large rug on the floor and put a cot along one wall. With a self-inflating pad and sleeping bag, this makes for a comfortable camp. I can use a small electric heater when the trailer is plugged in. If I find that I want to use propane heat in the future, I will need to add a vent of some sort, maybe a small window that I can open a little to get air circulation.

The other way the trailer can be set up involves a folding table with PVC pipes to make it taller. Having it at belly-button height makes it a lot easier to work on things. This table fastens to the wall and is perfect for cutting up and wrapping a deer.

Either the sleeping area or the butchering are can be folded out of the way to allow room for an ATV or a lot more gear. Right now it has plenty of room for my hunts, but I occasionally hunt with a buddy or two. In that case more room for gear would be needed.

So far I love the way I have this trailer set up, but I’m betting as I use it, I will find ways I want to tweak it. I’m already considering adding more interior lighting. I also regret that I didn’t paint the floor, but I can do that later. I have floodlights on the back that light up the area behind the trailer and ramp. I can see adding a winch to pull an elk into the trailer at some point. You never know where this will lead.