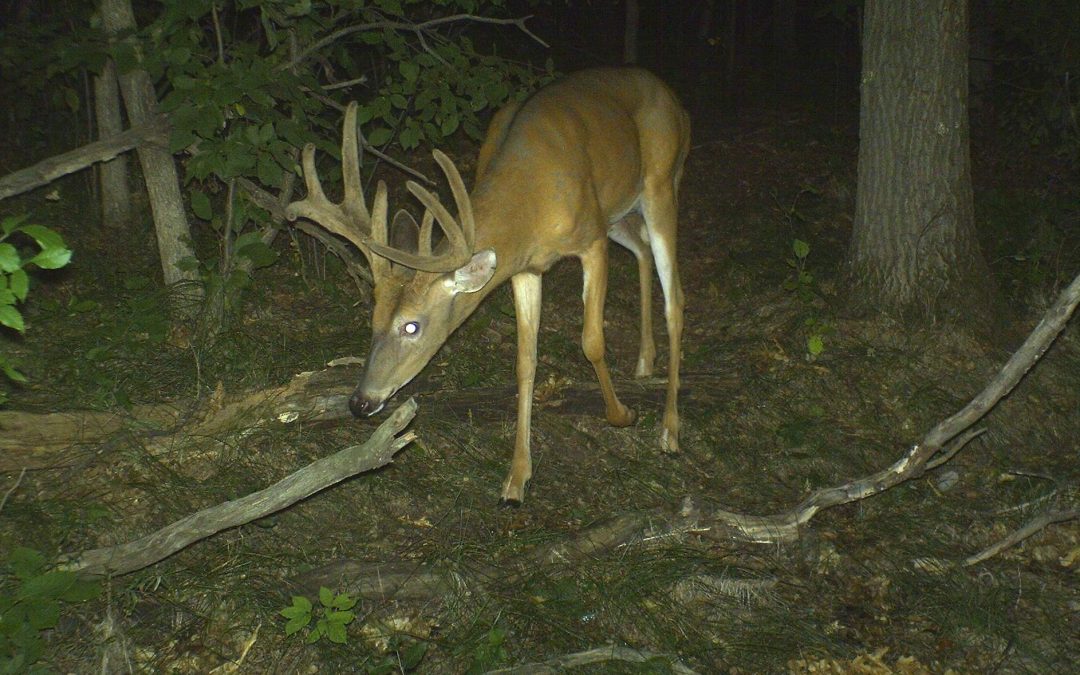 Don’t wait until the early season bucks hit the field in the evening, the best place to kill one is before they step into the open

The buck in my spotting scope was not a giant by any means. His thick, stubby 10-point frame would maybe go 130 tops. But for this part of north-central Minnesota where more than 80% of bucks are shot when they are yearlings, just seeing a 4-year-old buck is a rare occurrence indeed. What made this buck appealing was the predictability of his habits. I had seen him more than a dozen times in the same alfalfa field on late summer evenings. I felt I had a reasonable chance of shooting him in the first days of the season.

I had to take a couple weeks off in early September to chase bears, and when I returned, it was September 15, the evening before Minnesota’s archery season opener. I headed out to the field with anticipation and parked in my normal spot, scanning the field with a window-mounted spotting scope. By the last minutes of daylight, a half-dozen does had worked their way well out into the middle of the field, but the buck was nowhere to be found. My heart sank with the deepening darkness. I waited until I couldn’t see through the scope and then decided to head for home.

I drove the end of the dead-end road and turned around, and as I passed the field on my way back out and turned to go back on the blacktop, my headlights swept across the alfalfa one more time. But wait, now there was one more set of glowing eyes! I skidded to a stop and put my binoculars to my eyes; sure enough my buck in the headlights. He was standing in the corner of the field surveying the area before stepping out.  I glanced down at the clock in my truck: 8:30.

That’s when it hit me. He was right on schedule! I had been seeing him at about 8:30 since August when the sun was well above the trees at that time. He hadn’t changed his pattern, the shorter daylight hours had just caught up to him.

I never did shoot that buck, but I learned a valuable lesson from him. Earlier sunsets combined with a more nervous demeanor due to the shedding of velvet makes the bucks a little tougher to kill. Once the velvet comes off, they often spend quite a bit of time hanging back in the cover, observing their surroundings before venturing out into the open. Shooting them right at the edge of the field may not be the best option. A better option may be setting up back in the trees a ways in order to get a shot as they make their final approach. I’ve learned that there are three ways to up your odds of killing an early season buck using these regular patterns to your advantage. I’ll list them in a good, better and best order.

In order to waylay a buck between the bedding area and the feeding area, you must first figure out with a reasonable degree of certainty where the preferred bedding areas are located. Bucks will often bed in the same general area each late summer and early fall day unless some environmental change moves them. That may be rain, high winds or human pressure. Each of these will cause the bucks to seek out alternate bedding cover. But if you can find the most preferred sites, it becomes much easier to determine their travel lanes to the food sources.

Primary evidence will be trails of course and rubs along these trails. I like to actually see the beds, the droppings and all the things associated with the bedding sites, and I am not afraid to bump the deer one time to do it. I find that the first hand knowledge gives me confidence in my set-up. I would suggest doing this at least 2-3 weeks before you are going to hunt. The closer to hunting it is the riskier it is.

Deer are accustomed to getting bumped in the summer by berry pickers, woodcutters, ATVs, etc. In mid- to late-summer I may even place a trail camera there which I will come back and retrieve in about a week.

Once you find the bedding area, it’s a simple matter to pick the best looking travel lane and set up on it. Stay just far enough from the bedding area that you can get in and out without tipping them off and make sure your wind is not going towards them. This technique allows you to have the best chance of seeing the deer in the daylight. But picking the exact right travel lane can be a bit of a longshot.

Better: Set Up on the Staging Area

Mature bucks become very good at letting smaller bucks and does run interference for them. They love to hang up 30-50 yards back in the timber and observe as the other deer move out into the field. Some people believe they are waiting for dark and that may be the case some times, but more often I believe they are just observing the behavior and body language of the deer already in the field.

They like to use semi-open areas where they can see around them well, and out into the field. These areas are obvious once you know what to look for. The bucks spend their waiting time alternating between standing still while staring, while occasionally nibbling on branches and rubbing trees. As fall wears on, some of these areas will have a lot of scrapes, and in fact, some of the scrapes start to show up soon after the velvet is shed.

Another clue that will help you determine where the bucks are entering the field is the sign left on the plants themselves. Does and immature deer tend to hit the open edge of the field and trot out into it 15 yards or so before beginning to feed. Not so much with mature bucks. They like to stand right at the edge of the field and nibble a little before walking out into the open. This sign will show on the alfalfa or soybeans.

Trail cameras in these staging areas will help you determine the bucks that are using them and their timing. Resist the temptation to check them every day. Minimizing scent in these areas is critical.

Once you have determined the staging areas where the bucks are spending their last 30 minutes of daylight, you have to pick the right tree. Use the wind to your advantage and make a commitment to yourself not to jump the gun. It may take a few days to get the right wind but chances are you are going to have only a small number of opportunities to get the job done. Don’t take chances with the wind in this situation or all your hard work will have gone for nothing.

In these situations I do not hunt very high. It always seems that if I get over 15-18 feet, visibility becomes a problem. Thick cover in the canopy of trees makes it tough to see around you. Position yourself so you can see out in the field if possible; at the very least, have a good view of the surrounding woods in all directions. That usually means a 25-foot high stand will risk putting you out of commission.

Once you have picked your tree and put up your stand, make sure you get it trimmed out well. With leaves still on the trees and the thicker canopy associated with field edges, having enough shooting lanes can be a problem. Plus, the deer are more likely to be moving through the area, maybe milling around, rather than walking down an established trail. Clear several shooting lanes and keep in mind that these bucks often walk through the thick stuff adjacent to the trail the does are using.

When the time is right to hunt the stand, get there early in the afternoon to let your ground scent dissipate. Deer are going to filter through the area; it is critical not to spook them before the bucks arrive.

Not everyone can do this but it is definitely the “Best” way to target these early season bucks. Instead of waiting for them to go to the food, you can bring the food to them. Tiny food plots placed in known staging areas can be dynamite. These plots can be anywhere from a half-acre to the size of your living room.

The advantages of these mini-plots are many. First, you can put them where you want the deer to be, even picking the tree you want for your stand and putting the plot upwind of it. Put up two stands for two different wind directions if you want.

Secondly, you can keep the deer right where you want them longer, which increases your odds of getting the shot you want. Rather than milling around the areas while you are trying to find an open shooting lane, they are right in front of you, staying put, as they feed. You aren’t shifting around 180 degrees in your stand to get a shot at a buck that came in behind you, because the buck is standing where you want him.

Third, the choice morsels in the food plot tend to distract the deer from what is going on around them. This can be very helpful in getting a bow drawn, or allowing you to stand for a shot if you prefer to do so.

And finally, the bucks tend to arrive earlier at these little food gems, increasing your chances of getting a shot in the daylight. Once they have had a few positive experiences with these staging area plots, they gain an increased comfort level and tend to spend a significant amount of daylight there.

Many seed companies produce blends of plants that are perfect for early season food plots. Check with them and pick the blend that is best for your area.

Every situation is different and the terrain and conditions where you hunt are not going to be the same as mine. In northern Minnesota, the amount of daylight hours changes by about 3-4 minutes per day in late summer through early fall. That’s about a half hour every two weeks. Chances are it’s not that dramatic where you live. But for sure, the increasingly early sunset times are eating up your chances of getting a buck within range during daylight, so choose from one of these good, better or best tactics and get your buck on his final approach.