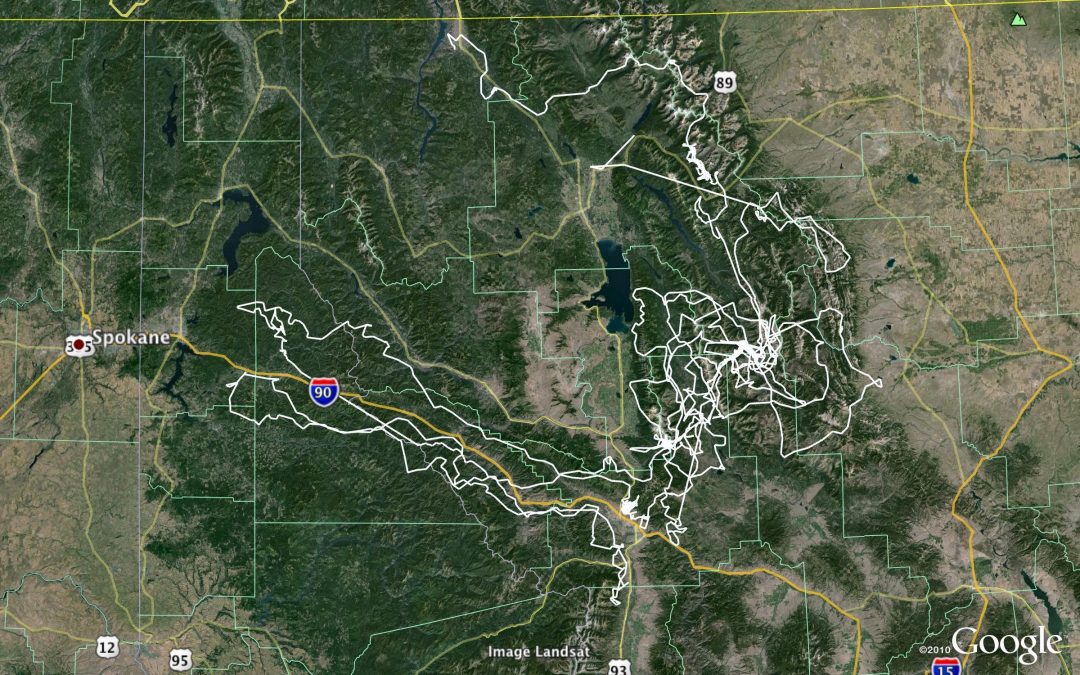 One grizzly bear’s incredible 5,000-mile journey across Montana and Idaho has scientists re-thinking what they know about the animals.

Ethyl the grizzly bear was 19 years old when she started out on her epic journey over 5,000 miles in two years.CREDIT U.S. FISH AND WILDLIFE SERVICE

Ethyl the grizzly bear walked from Kalispell, Mont. west toward Coeur d’Alene and back east toward Missoula. She covered thousands of miles of mountainous terrain in just two years, and scientists are still trying to figure out why.

“She was eating apples near somebody’s house,” Servheen says. “To keep her out of trouble, we captured her and moved her. She basically stayed right in that same area, she stayed out of trouble.”ListenListening…5:03Click play to hear Samantha Wright’s conversation with Chris Servheen.

They captured her again in 2012 along with her cub, close to the first site, again eating apples. She was moved again, this time about 30 miles away, and biologists put a tracking collar on Ethyl. Servheen says that’s when 19-year-old Ethyl’s epic journey began.

“She started traveling all through the northern continental divide grizzly bear ecosystem.” Her collar recorded a distance of about 2,800 miles between the individual locations, which are recorded every six hours. Servheen says, “she certainly went a lot farther than that, because those are just straight line distances, so she probably went well over 5,000 miles in two years. She sure covered a lot of ground.”

Here’s a map of Ethyl’s movements over the last two years, as tracked by her radio collar.CREDIT U.S. FISH AND WILDLIFE SERVICE

Servheen has been studying bears for 34 years. He says Ethyl’s is the longest journey he’s ever seen undertaken by a grizzly bear. “She was in really remote country quite a bit of the time, and then sometimes she was very close to people,” says Servheen. But he says Ethyl never had a run in with humans, and she crossed several roads and highways without incident.

The big question is why was she traveling so far from her home range. Servheen says scientists don’t have a clue. “She was minding her own business, just looking around. Why she did this and what she was looking for, we don’t know, it’s a mystery. She’s a traveling bear, that’s for sure.”

He says Ethyl took a strange route, too. “It’s almost like she was looking for something, but I have no idea what she would be looking for,” Servheen says. “I just can’t explain it. It’s a new one on us.”

Ethyl’s remarkable journey is teaching scientists new things about bears. Servheen says she’s taught him “that we need to know more about how bears move across the landscape.”

He says biologists learn something new every time they collar a bear. But “Ethyl’s movements really don’t fit into any previous pattern we’ve seen before,” says Servheen. “Whether this is something that happens more often than we think, I suspect not. I think what Ethyl was doing was something unique to her and why she was doing it, there’s no real rational reason that we can understand why she did this.” But, he says, “it’s good to have a little mystery out there.”

Servheen says Ethyl’s collar fell off this year, so they’re not sure where she is now. But he hopes she’s sound asleep in some warm den “somewhere up in the mountains under the snow. I hope that when she comes out next spring she settles down and continues to live successfully, and has cubs.”

Do you have an opinion on what caused this bear to travel so far? Leave your comment below.