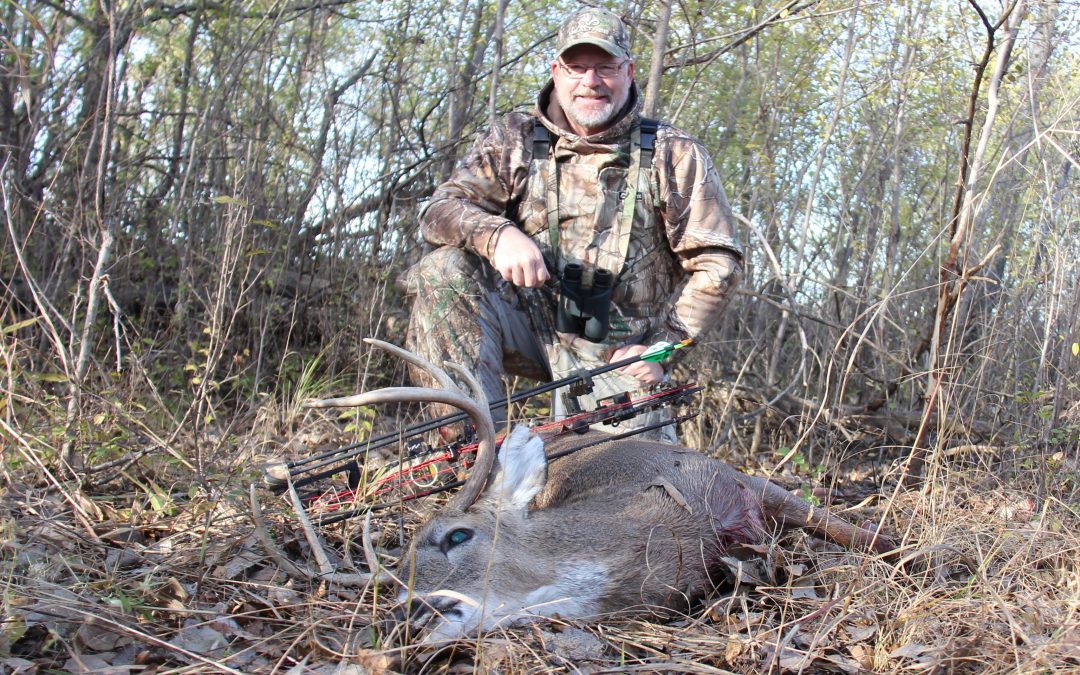 I’d been sitting in a tree by a trail that led to a bedding area composed of willows on a riverbank. A steep hill was 100 yards to the west and I was surrounded by rubs and scrapes. I had spent two mornings and an evening in this spot, with a great deal of confidence. It looked good and felt good.

The morning before, I watched a string of six does and a yearling buck walk a trail 60 yards to the west. I had considered that trail for my stand, but frankly, the one I was sitting in just looked a lot better. Over the next two sits, I continued to see deer using that other trail. I also had the frustration of watching a nice 10-point buck work a scrape just out of range. I decided to move my stand 60 yards so I could cover that trail. I didn’t fully understand why, but for some reason that’s where the most activity seemed to be. By all outward appearances, the place I was sitting should have been the right spot, but I moved anyway.

The following morning, and hour after daylight, I could hear two bucks fighting down by the river. They were in the bedding area, and if I had been in the stand I had abandoned the previous day, I would have been able to see them. I silently cursed my luck for moving. But my disappointment would be short-lived. 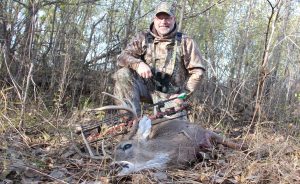 Suddenly, a 3-year-old eight pointer came running up the bank and raced by my stand. It was followed by a heavy-bodied buck with dark fur, thick shoulders and a big gray head. A buck much older than you would expect to see on public land. He crossed the trail at a right angle then stopped at 40 yards perfectly broadside, looking momentarily for the younger buck he had just vanquished. My arrow sliced through both lungs before I could hardly even fully grasp the situation or think about the shot. It happened so fast and I was in automatic mode.

I’d been hunting three different public properties in that area for 12 days, and that subtle move of the treestand made the difference. I had drawn a tag for that state, researched the public land opportunities, chosen a small number of places to look at, finally settled on three of them, and eventually, picked the exact right tree. That’s what being a successful freelance bowhunter is all about.

The positive outcome of that hunt was the result of a doing lot of homework. I’d spent a lot of time the previous winter doing research on this piece of public land, which included talking a local hunter who gave me a lot of good information, reading what I could on the state DNR’s website, speaking to a biologist and game warden on the phone and gazing at aerial photos on Google Earth.

This is the one component of the puzzle where the decision is made before you ever leave home, and winter is the time to do it. You first have to decide where you want to go. Some states offer tags over the counter, some require you to apply and choose a zone, and yet others require you to apply for several years before you will draw. Make a list of the states you would like to someday hunt and start applying for tags or preference points. You will need to understand the terms relating to tags and drawings and this article offers of ton of info.

For the sake of argument, let’s say you have drawn a tag or want to hunt an OTC state. The first thing you should do is start with internet research.  There is a lot of information on this site that will help you make decisions about the public areas too. Spend some time researching public areas on the state game departments’ websites. 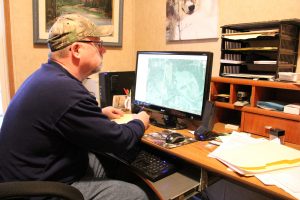 Large national forums such as Archery Talk, Bowhunting.com, Bowsite.com and others offer a large pool of people who can offer up good answers to specific questions.

It seems there are hunting forums for each and every state. Some of them are very active and others not so much. Find the ones for each of the states you have an interest in and then start visiting them. Sometimes the locals can be a little harsh when you start asking for information, but if you establish a relationship, you can often find some good info and there always seems to be a couple guys with knowledge and a helpful attitude.

Avoid asking general questions such as, “I have an Iowa tag, which public hunting areas are good?” All that will do is make people think you are trying to use them to do the research that you should be doing yourself. A much better question would be “Has anyone hunted the Shimek State Forest… can you tell me how much bowhunting pressure to expect there the first two weeks of November?” That question will probably get a helpful response.

Of course, it is important to spend time on the state DNR website and learn about the public hunting areas. Most states have maps of their public areas. It seems to work best for me to compare these maps with Google Earth aerial photos. I like to look at the borders of the areas to see what the property lines look like. What does the land on the other side of the property line look like? Is it open farm ground or maybe urban area? I have hunted a couple pieces of public land that had some really well managed private land adjacent to it. On Google Earth you will see what to look for: Food plots, clearings, streams, sometimes even shooting houses or treestands. Once you have seen a well-managed deer sanctuary on Google Earth, you will begin to recognize what to look for.

In one case I was looking over a nice-looking piece of public land, when I discovered that the northern border of the property was a stream. The DNR had planted a large clover lot along the stream, but it was a mile and a half from the nearest road. I liked what I was seeing already, but it was about to get a lot better. On the other side of that stream was a large block of timber that had a few openings cut into it. In those openings were green plots, and they were way too small to be farm fields. Tractor trails connected the food plots and ATV trails showed where the stand sites could be approached. Clearly this place was being managed for whitetail hunting. A look at the land records for that area showed that the land was owned by a well-known television hunting couple. Think the potential for that piece of public land might be a little better than average?

The Boone & Crockett Club website offers a feature that allows you to search out the best states and the best counties within those states that have produced the Boone & Crockett Bucks. It’s called Trophy Search and it’s a great tool for the freelance hunter. You can sort their records according to the criteria you select. They charge $50 per year to use the tool, and it is well worth it. Spend the $50 and then spend some time searching through their records. It can be quite revealing. The Pope & Young Club offers a CD of all their records. I use the entire set of records in an Excel file so I can sort by state, size, county, etc. It’s not quite as easy to use as the B&C trophy search website, but the information is there if you take the time to mine it out. These two tools will help you discover trends that will help you understand which area of each state has the best potential to produce mature bucks.

Finding a person with boots on the ground in any area can be one of the best ways to flesh out your options. In fact, some conversations can be very revealing. It might contain a reference like this, “We have been doing a lot of work planting food plots on Public Area X this summer and the deer are really piling into it.” That’s good stuff right there.

Speaking in person with a state, federal or county employee can keep you from making a big mistake too. In one case I called a biologist who looked at his calendar and said, “We’ll be doing a huge prescribed burn on that area that week, we’ll be burning 600 acres of switchgrass so there will be a lot of personnel, trucks and smoke on that public area for about four days that week.” He kept me from making a big mistake.

In another case, a biologist once told me that the area I had been looking at took a huge hit from EHD that summer, but the next county over didn’t get hit as hard. He also told me that the two public areas in that county held some nice bucks and don’t receive much pressure except during shotgun season.

Don’t be afraid to call and ask specific questions. These people are public servants and your license fees pay their salary. Talking to you is part of their job so use them as a resource. You can find their phone number on the state Wildlife Agency website. Sometimes it takes a while to track down the biologist because they are often in the field every day. Winter is usually the best time to catch them in the office with time to talk.

If you have had a desire to hunt whitetails in another state, the work you put in now will have a lot to do with your success in the fall. There’s no time like the present time to get started. 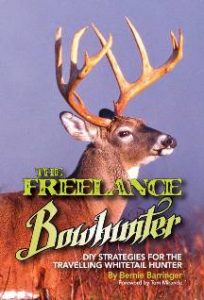 For more detailed information on hunting out of state, see the author’s new book The Freelance Bowhunter: DIY strategies for the travelling hunter which is available HERE.