History comes alive: Shooting a deer with a 153-year-old gun 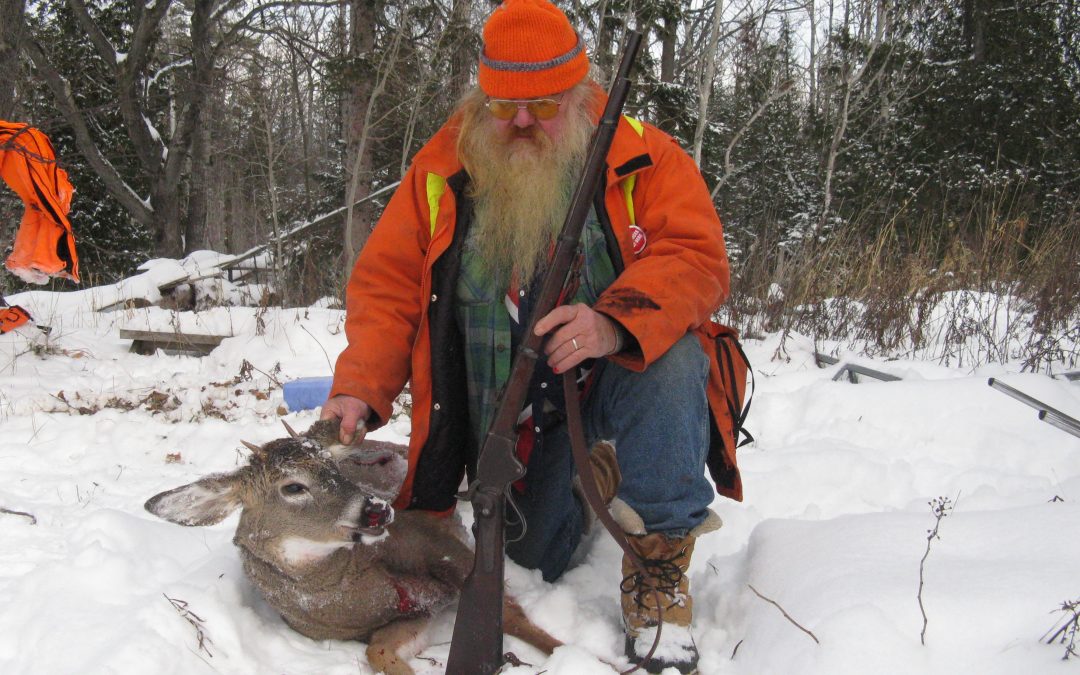 There is always the question should I purchase a new rifle just cause it’s soon to be deer season again? Should I just stick with Ole Faithful “Betsy?” Is there an extra hole in my gun cupboard that needs filling? Can I just tell the “Wife” that controls the finances that ole Betsy is done wore out and I just have to get this new one that’s on sale for near half price? What a dilemma this can turn out to be.

This problem is pretty simple for me most times. I’ve only bought a few brand-new rifles in my life. A new model 1895 Marlin in 45-70 in the early 1970’s when they first came out again. A Buffalo Bill commemorative model 94 in 1972 at a clearance sale, and a new Model 1892 Winchester in .44 magnum, takedown a few years back. That’s just three new ones for me. I’ve traded or bought and sold well over 1,000 rifles, shotguns and handguns over the years. All used, in various conditions, some just to resell, some to keep as part of a collection and some to give away to young folks, fundraising banquets and special friends and family members. A good number I sold were estate collections that I got a fair value for the remaining family.

This year for the annual Manitoulin Island Ontario deer hunt, I decided to use one of the older rifles I had and try and get a deer with it. I initially bought this fine rifle in 1995 from Rob Sheppard and his dad Ron. Rob wanted to use the money to buy an ole Mazda pickup. I said the gun will outlast that pickup for sure. Now this turned out to be a very special rifle. It was a model 1865 Spencer rifle made in 1865. It’s one of only 3,000 that were made. Of that number, 2,000 were sent to the Commonwealth of Massachusetts National Guard and most of the other 1,000 went to Canadian Troops. This particular rifle was used by the Queens Own Rifles to fight with in 1866 in battles along the Niagara escarpment against the Fenians. The rifle is marked with the “WD” and big broad arrow to show it was used by the military. It was chambered for 56-50 rimfire spencer cartridges. It has a seven shot tube in the butt stock and is a lever action.

Spencer was one of the first repeating lever guns out there that were made in any quantity. They started in 1857 and got it perfected in 1859. It was in production by 1860 in a small frame version. The U.S. Army purchased 45,733 of these 1860 carbines, then an additional 18,959 Model 1865 carbines as well and also 30,502 carbines made by Burnside. That’s a pile of Spencers. Most of these were all for Northern troops in the civil war. While mine is not a civil war souvenir it has a far greater place in Canadian history as well as the fact that it was one of only 3,000 made in that model the 1865 rifle.

A few years later (1998) I was in Boise Idaho visiting with my friend John Taffin and one day he was tied up doing something or other and I had asked him if there were any old gun shops around that may have some parts for the older guns. He gave me good directions and in an old shop I found a replacement block for my rifle. The intent was to alter it so I could shoot centerfire ammo rather than the obsolete rimfire ammo.

Well as some things go this project set on the back burner till this year. I contacted my gunsmith buddy “Buck” and asked him if he could alter the spare block for me. He said yes and I drove over with the rifle and spare block. I told him I would like to take a deer with it this fall or perhaps a bear. I left the block with him after the measurements were taken and came back home. He called after he had the block done and I brought the rifle back for the final fitting. I left it there with him. He had a few other problems to sort out once he got to the fitting and it was a much larger job than we both anticipated. I got a call on a Tuesday night it was ready. Ed Hable and I went down to pick it up. Buck says try it and then we can talk about the bill. I had left some primed cases there for him to test fire to be sure it was working ok. That evening I received three boxes of spencer ammo. It’s loaded in Indiana using Starline brass and a 340 grain FP lead bullet. A couple days later we tried it out and it grouped pretty good for me at 25 yards.

While doing some research on this rifle I made contact with Rob Greive who is the curator for the Queens Own Rifles Museum at Casa Loma in Toronto. He indicated he would like the rifle for the museum. I was going down that way in September to bring my wife Heidi to the Toronto Airport so we set up a date of September 30 to meet and go to the Oshawa gun club and do some shooting. Rob got two of his friends Boris and Les to sign us in and we commenced to shooting. Boris did best by far. He shot a three shot group at 50 yards that you could cover with a Looney. That’s some shooting. I made up my mind then to do a bit more practicing and use it this November. 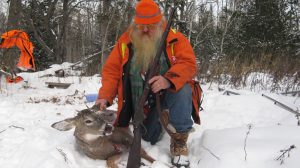 The trigger pull on this rifle is very heavy, in fact it’s 12 pounds and that takes some getting used to. The first day hunting with my ole buddy Randy Noble I had a tough time seeing the front sight. It’s the regular barley corn style of the period. So at lunch time I asked Miranda (Randy’s daughter) if she had any nail polish in her purse. She frowned and said “no.” I said could you find me some and I prefer bright pink. She thought I was joking till I told her it was to put a small dab on the front sight. Well after lunch I had three bottes to choose from. I settled for “07 Cherry Smash” by Sally Hansen, Crackle Overcoat.

Well it sure made things easier to see with that dab of Pink. Tuesday afternoon at 2:30 or so a spike buck came out by me to feed on some corn I had put out. After a bit I had a reasonable shot at 52 yards. (I had checked the distance earlier) that was about as far as I wanted to shoot. The gun went CLICK and no bang, I re-cocked it and again CLICK and the deer is getting spooky, CLICK one more time and this time the deer turned for a perfect shot. I said a quick prayer and pulled the trigger the fourth time and there was a bang. The deer made one jump and was out of sight. Randy came by with his 4 wheeler and took a quick look. I was out of the stand by then for a look as well. The deer only ran about 20 yards and was laying there stone dead. That’s the most excitement I had hunting for a while and very satisfying. I could hazard a pretty reliable guess and say I was the only person in Ontario if not Canada to shoot a deer this fall with an Original 1865 Spencer Rifle! Really. There are lots of the ole carbines floating around but the rifles are scarce as hen’s teeth. 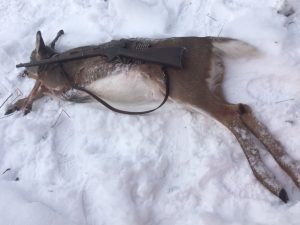 The fact that the rifle is 153 years old was not a problem doing the job for me. I would not shoot it at a much longer distance as I feel the killing power may not be sufficient at 100 yards but more so is my eyesight is not so good as it once was and that makes it harder to see the iron sights with this old one. The powder charge in the 56-50 cartridge puts it above the old 44-40 and close to the .44 Magnum so it does pack a fair wallop. Of course accuracy plays a big part in harvesting any type of game.

Now I have to start considering the deer hunt of 2019, hmmm. Well I have a bit of a plan and that’s to hopefully use a .44 Evans. That’s a unique rifle as well. If its in good shooting shape by then it will be the number one choice and if not, then it would likely be a .41 Swiss Vetterli in 10.4 x 42R that I had converted from rimfire to centerfire. Both rifles are 1860’s vintage and are pleasant to shoot. They, like the Spencer, represent the early age of the repeating rifle and the demise of the single shots. Back 150-160 years ago no one had even heard of a CNC machine and a good bit of the fitting and parts making was all done by hand but the quality shows today that these are still functioning, working models of these early inventors.

If I had a brand new vintage firearm in the original box that had never once been fired I would maybe not be the first to fire it. If the vintage rifle had been shot before then by all means I would shoot it again providing it’s in good enough mechanical condition. One of my mottos is: “IF YOU OWN IT, THEN SHOOT IT”

Texas is the Owner Operator of Texas and Sons Guides and Outfitters since 1972, specializing in Black Bear Hunts with Bow, Muzzleloader, Shotgun and Rifle in Northern Ontario Canada.                      See www.texasandsons.com for more info.