Four Weeks of the Rut: Be in the Right Place at the Right time From the final week of October to the third week in November, the rut offers some of the best whitetail action of the year. Here’s how to put yourself in the right spot and make the most of it.

The month of October has always been a test of endurance for this bowhunter. It really wouldn’t be that bad if it weren’t for the thought of what’s coming always lurking in the back of my mind. Oh, I’ve killed a couple bucks in October, and I know some tricks that help beat the infamous October Lull, but it just ain’t November. This frustration abates quickly once the final few days of October roll around. Every year in the Midwest, no matter which state I am hunting at the moment, the few days leading up to Halloween see a marked increase in buck activity and I love being in the woods to watch the action unfold. The action explodes and the next four weeks are a race against the calendar as I try to place myself in the right place at the right time to take advantage of each week’s unique opportunities.

About three days on either side of Halloween can be the best days of the year to hunt rubs and scrapes. Scouting cameras place on active scrapes and rubs will tell the story. Find an area that’s all torn up with fresh sign and you will start go get photos of bucks on it during daylight. It’s time to make your move because this window of opportunity is short.

Using a good quality deer lure in association with these scapes can be golden. Scrape drippers have high value at this time because they are constantly dripping fresh scent into the scrapes. Additionally, they have some calling value that helps bring bucks in from downwind. 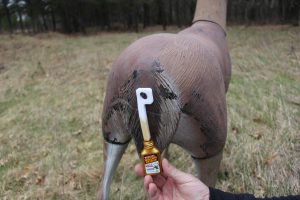 Scrapes which have not been enhanced have been studied with scouting cameras in several scientific surveys and have revealed that the cameras show that bucks approach the scrapes and get their picture taken mostly under the cover of darkness. I’ve observed bucks circling downwind of these scrapes to “scent-check” them in daylight. Setting up 20-30 yards downwind of these scrapes can put you within range of a cautious buck during legal shooting hours. I’ve found that enhancing the scrapes with some fresh scent will often pull the buck right into the scrape. 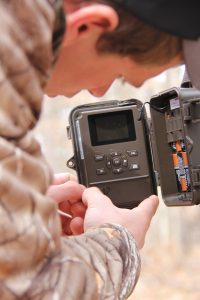 The end of October is a great time to call a buck with a grunt tube. When you see a buck out of range, the odds of turning him towards you with a deer call are better than at any other time of the year. Don’t call too often and only call when the deer stops coming. When calling deer, always position yourself so the deer has to walk over to you in order to see what’s there. Calling in open-canopy forest, for example, reduces the effectiveness since the buck can see nothing that attracts him. If he has to walk towards you to come looking for the source of the sound, your odds of getting a shot are much higher.

The value in hunting scrapes and rubs begins to taper off during the first week in November and by about November 10th, I am no longer hunting sign at all. The chasing is going strong by then, so the bucks are actively looking for does by sight rather than sniffing around where they used to be.

Beginning in early November, the effectiveness of rattling is at its peak. Seems like every buck in the woods is interested in what the does are doing and how much success the other bucks are having. Rattling at this time offers them something they have a hard time refusing; the idea that he might be missing out on some action. 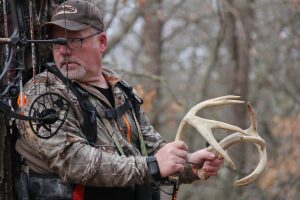 Does are still feeding in somewhat predictable areas, and the bucks know where to look for them. Whenever rattling on the edge of a field, which I do often during the first week in November, I like to use a decoy for the visual appeal. A decoy also gives you a little buffer against having a deer come right in on you and catching you in the middle of a lot of movement. The decoy attracts the eyes of the incoming buck and takes them off you. This can be the difference between having a stare down and having time to put the antlers down and get a bow ready for the shot.

I rarely use doe decoys alone these days. Seems like I’ve had more bad experiences with a lone doe decoy than good. These bad experiences normally come in the form of other does which just can’t settle down and have to get a reaction out of the newcomer. When they can’t get a reaction, they normally resort to snorting and stomping, actions that will make laying your eyes on a buck much harder. Better to use a buck and doe in combination or a buck decoy with one antler missing so he looks vulnerable. The one-antlered young buck setup has more success than any other for bringing a buck across a large field, especially when associated with calling and rattling.

I use a lot of stands overlooking fields and open areas during this time. I like to call them observation stands because they allow me to take in the view of larger area, which can lead to clues about where the deer are feeding, bedding and rutting. This is particularly true in the mornings. Seeing a lot of deer activity in one corner of the field, say, might induce me to use the middle hours of the day to locate a stand in that area for the evening hunt.

By the tenth of November, the rut is in full swing and breeding is taking place. Bucks are paired up with does or actively searching for does to pair up with. Once paired up, the two will breed several times over a 30- to 40-hour period, then she loses interest and he’s forced to move on.

By this time I am hunting terrain features almost exclusively. Both bucks and does are on their feet and I want to park my butt in an area that funnels deer movement near my tree. A buck can come cruising through at any time of the day or night during the middle part of the month. He may be chasing a doe, following her closely as she moves through, or he may be alone, moving at a steady trot with tongue lolling as he’s on the prowl for his next volunteer. I love trails along ridge tops for this time period. Additionally, funnels along river banks, steep bluffs or pinch points between two open fields can be dynamite. Any terrain feature that subtly directs their movement can really help. I have a few of these funnels I have found in several states and usually they are good year after year because what creates them doesn’t change much. I’ve killed three good bucks in the last four years from one of these locations on a piece of public hunting land in Kansas.

Spot & stalk hunting is also prime at this time. In open country or farmland, one tactic often used by bucks is to push their doe out into the open where he can keep an eye on her and defend her from other bucks. Early morning light may find them in an open field looking for a small patch of cover to spend the daylight hours. You may see them standing out along a grassy fencerow, shelterbelt, terrace or an erosion control grass waterway. They will eventually lie down and provide you with an opportunity to sneak up close for a shot. It’s not a high percentage way to hunt but it certainly is adrenaline-charged and when you are successful on something this tough, it’s that much more rewarding.

The rut is winding down as the month wears on towards Thanksgiving. If you still have a tag in your pocket, all is not lost, there are still opportunities to bag a big one. Nearly all the does have been bred but the bucks just aren’t ready to leave the party. They know where the doe bedding areas are found and they will constantly check them for any last minute opportunities. If you know where the does tend to spend their days during the various weather conditions, you’ll have opportunities as well.

Bucks tend to work their way through the downwind areas of cover or hillsides where the does tend to ride out the daylight hours. Trails that lead between bedding areas can be dynamite. The helter-skelter of the rut is being replaced by more normal feeding patterns, and the bucks know where to look for the feeding areas. Find the does and you’ll find the bucks.

Scrapes start to see more action again, and a camera placed at a cluster of scrapes will tell you what bucks are still in the area. At this time, the bucks can’t be counted on for any sort of regularity, but the cameras will help you gauge the state of activity and offer an inventory of the bucks that are available. One of my favorite tactics during the closing days of the rut is to use a drag rag. It’s nothing fancy, just a string tied to my ankle with couple key wicks tied to the other end. I dip the key wicks into a bottle of doe in heat lure (Special Golden Estrus is my favorite), and walk to my stand. I like to use this the final 200 yards or so approaching my stand. I then walk to the stand on a cross wind if possible to avoid taking the deer downwind of me.

Wish I had a dollar for every buck who came sauntering along with his nose to the ground following that scent trail. True, the majority of them were young deer, but what was for a long time my largest buck was taken this way. He stopped at 15 yards, lifted his head and looked around just as my arrow zipped through him.