The Surprising Relationship Between Wolves & Bears 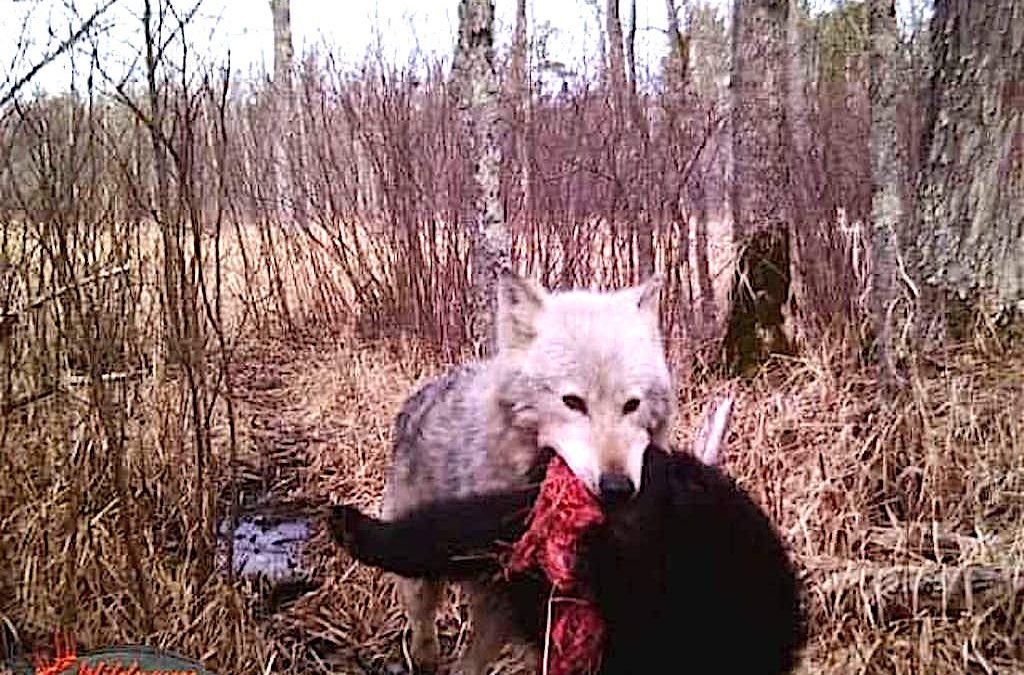 It may come as a surprise to many that wolves eat bears. This is a problem that seems to be growing anywhere the two species overlap.

My 18-year-old son Dawson sat in a stand beside me as we watched a medium sized bear feed at the bait. It was the first day of my bear hunt in Ontario a few years ago, and Dawson was filming the hunt for me as he often did. The bear was not one I would consider shooting on the first day of the hunt. Suddenly, the bear stood up and looked into the bush, then spun around and rocketed out of the area as if he had been shot out of a canon.

Dawson reached for the camera and turned it on. He’s filmed enough bear hunts to know that when the small bear leaves in a hurry, there’s a good chance a bigger bear is about to make an appearance. But I was conflicted as I watched the bear streak out of the area. I’d seen a lot of bears around baits and I had never seen one leave in such a state of total panic. 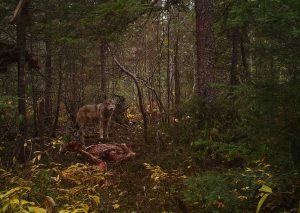 A moment later, the issue came into clear focus as a timber wolf trotted in and looked over the area. He sniffed around a little, made a half circle around the bait site, then left on the trail of that 200-pound bear. It wasn’t my first introduction to the fear that wolves put into bears, but it was a graphic one.

As wolf numbers have increased across North America in the last couple decades, their effect on deer populations has generated a lot of attention among sportsman’s groups and in the media. No doubt there are a lot of teeth in the woods, and wolves have significantly reduced deer numbers in many areas, but there are other animals suffering at the rise in wolf populations and they haven’t been getting the attention they deserve. The black bear is a prime example. Many bear hunters, guides and outfitters are getting a wake-up call about how the high numbers of wolves and low numbers of deer are affecting the amount of predation on black bears.

On my bear baits in Minnesota, I have seen active bear baits go completely dead when wolves move into the area. Wolves will eat some types of bear bait, but that’s not the real reason they hang around. Wolves eat bears. And what better place to find a bear than the high-percentage area in the vicinity of a bear bait? 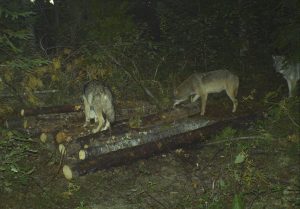 Wolves hang around bear baits not just for the bait, but because they know it’s a high-odds place to get a meal of black bear meat. Once the wolves arrive, baits often go dead as the bears abandon them.

I have long suspected that wolves could be a real problem for bear populations, in fact I have seen wolf scat full of bear fur on several occasions, but in speaking with biologists, none could verify that it’s common for wolves to kill and eat bears. In fact, most biologists are very reluctant to say anything that would cast wolves in a bad light. Considering the emotionally-charged political climate surrounding wolves, many people within the game departments of states where wolf populations are at issue just seem to avoid the subject.

Woodsmen, trappers, hunters and outfitters in areas with high bear-wolf interactions aren’t so inhibited. Mike Foss, a long time bear hunting outfitter in Northern Wisconsin is frustrated by the lack of understanding about how much effect wolves have on bear populations. He has come across the remains of bears killed by wolves in the forests and he feels the problem is increasing. “Not only is our deer population having a difficult time rebounding from dismal numbers caused in part by wolf predation over the past decade,” he says, “but some bear guides, including me, believe our great bear population is literally under attack, specifically cubs and younger, immature bears.”

He claims that much of the predation takes place in the winter where wolves pull bears out of the dens and eat them. He cites a fellow guide who found evidence of wolf predation at three bear dens late last winter.

And he’s not alone. Tom Ainsworth, long-time bear outfitter in the Duck Mountains of western Manitoba says it’s common in his area as well. He puts out bear bait on snow machine in late winter and he’s noted where wolves have killed bears on several occasions. He says wolves will kill bears whenever they have the right opportunity. One of his guides is a veteran wolf trapper who claims to have come across many cases where wolves have caught bears in their dens, drug them out and killed them. Wolves will also target cubs all year whenever they are far enough from a climbable tree. 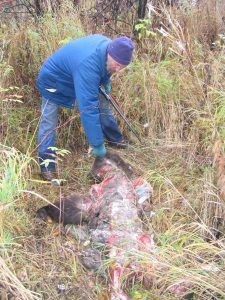 Here a hunter examines a bear mostly eaten by wolves.

In that part of Manitoba, trappers and hunters target wolves all winter which helps keep the problem somewhat under control. But in Wisconsin, the lack of opportunities to control wolf populations along with mild winters has created a perfect storm for high predation rates and many bear enthusiasts are becoming alarmed.

There are more cameras in the woods than at any time in the past, and instances of interactions between bears and wolves are on the rise. The advent of phones with cameras has added to the documentation of wolf predation on bears. Blogs, social media and YouTube have examples with photos and videos show evidence of bears being pulled from the dens and eaten by wolves.

But are the cameras just catching what has been common all along, or are the numbers of bears being killed by wolves on the rise? Mike Foss feels that wolves are targeting bears more and more. “Is there now such a predator-prey imbalance—not helped by federal judicial protection of the wolf—that deer numbers can’t recover and other prey, including the black bear, is providing an alternative food source? I believe that is probable.”

It’s difficult to quantify just how big this problem is. There haven’t been any studies done on it, and considering the political climate surrounding the topic of wolves, don’t expect one anytime soon. But as more and more voices are being raised, it’s clear the problem is growing. 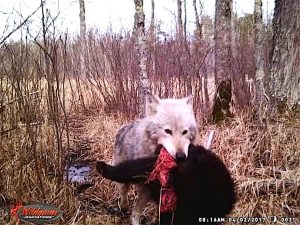 One of the most simple solutions of course would be to harvest more wolves and bring their population back into balance. But it’s not that easy. In the western US, that move is underway as wolf hunting is a growing sport. But in Wisconsin, Minnesota and Michigan, the states’ ability to manage the wolf population has been hampered by court decisions that prevent hunting and trapping by preventing the delisting of wolves from the Endangered Species Act. The ESA was designed to bring threatened species back from the brink of extinction, and it has obviously worked in the cases of some animals. The wolf and the bald eagle are perfect examples of how the ESA can be effective. However, animal extremists are using the ESA as a political weapon. The black bears and the people who rely on them for food and recreation are suffering because of it.

In areas of Canada where hunting and trapping of wolves is legal, residents target them for their fur, as trophies and as a way to give the prey species some much-needed relief. There is a growing number of people from the states who are interested in a wolf hunt, but the cost and success rates have been a hindrance. Wolf pelts are at their most impressive in the early winter, and at that time a bunch of other hunting seasons compete for their attention.

John Palson, my outfitter on that Ontario baited bear hunt mentioned earlier, is working to see the price of nonresident wolf tags lowered, which he believes will give incentive to bear hunters to have a wolf tag in their pocket when bear hunting. He believes this will help him reduce his wolf population. But it remains to be seen how many bear hunters will shoot a wolf during the August and September bear seasons when their pelt is substandard.

Another option would be for outfitters to offer wolf hunts later in the fall when the wolf skins are more desirable for mounts and rugs. Some are already doing that. The wolves can be hunted at the bear bait sites by using meat scraps, roadkills, or game animal bones and trimmings after the bear hunters are gone, then placing hunters at those locations for a wolf hunt. Others will chop a hole in a frozen lake within shooting distance of a blind on the shore, then dump in butcher trimmings. As the trimmings freeze into the surface of the lake, the wolves much claw and chew at them. The time it takes the wolves to clean up the goodies offers multiple opportunities for hunters to make a kill.

Reducing wolf numbers seems to be the key, but it can’t be done in all the problem areas. So there are no easy answers to this problem. Mike Foss believes hunting and human interaction are some of the keys to giving the bears a much-needed break. “Wolves are still present in the agriculture lands, but they have much more human contact and a better deer population to sustain them over the winter months— leaving the slumbering bears alone to awaken to another spring.” He adds, “The wolf knows only that eating means survival. Without the proper balance of predator and prey, we are in trouble. 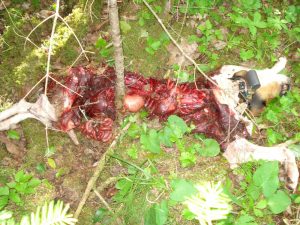 In many areas where hunters pursue bears with hounds, the increase in wolf numbers has created extreme hardship and both emotional and financial pain. That romantic howl of a good treeing hound on the trail of a bear stirs a place deep in the soul of the hunter, but to the wolf, it’s nothing more than a dinner bell.

Hound dogs are no match for a wolf, and when the wolf packs attack, there are seldom any survivors among the hounds. It’s common for the wolves to consume most of the dog before moving on, and it happens so fast that it’s rare for the hunters to be able to arrive in time to stop the carnage. Two hotbeds of this problem have been Idaho and Wisconsin, where hound hunting for bears are traditions that run deep in the bear hunting culture. A reduction in the artificially high wolf populations in these areas would help reduce occurrences, but realistically, this is a new normal that hound hunters must always have in the back of their minds, and adapt to the changing landscape by altering the way they hunt to minimize losses to wolves.