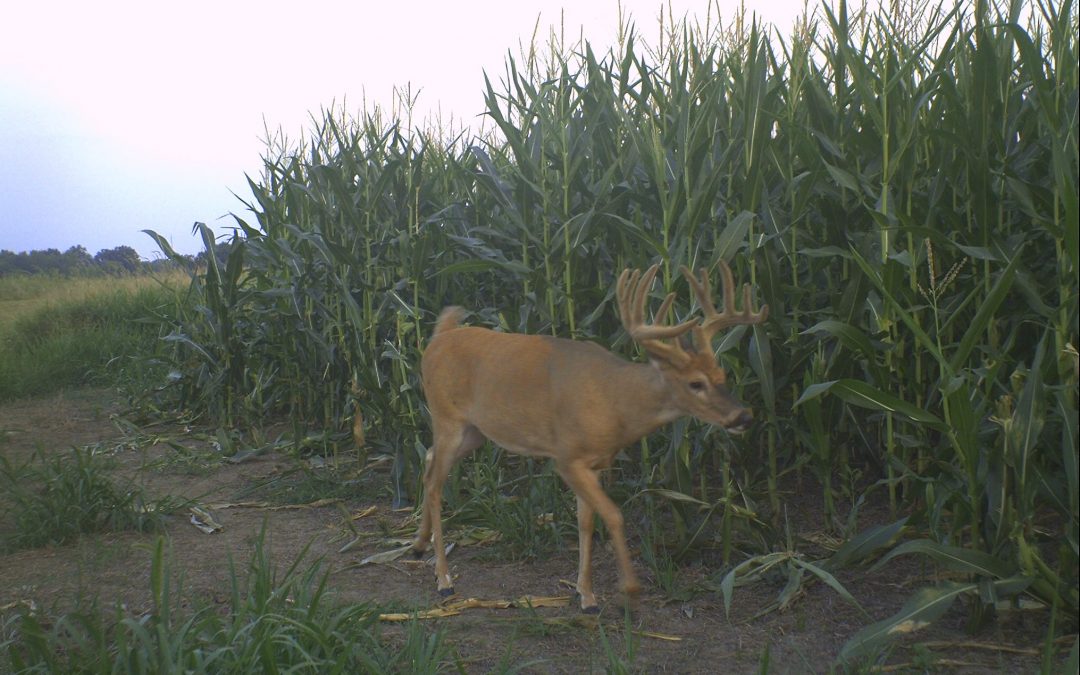 Every bowhunter can relate to this scenario: You have watched a particular buck off and on all summer. He’s been quite visible in the fields feeding in the evenings and he’s even somewhat predictable in his habits. This could be the year you actually pattern a buck in the pre-season and shoot him on opening day or shortly thereafter. After all, you see it on TV and in magazines, it’s bound to work for you sometime.

Just a few short days before the season, he’s gone. He’s not in the field during the last hour of daylight, and he’s not even in the fields of nearby properties. You’ve checked them all. You’re sure-thing just turned into a bust. What happened?

Chances are he’s not gone. And he hasn’t even “gone nocturnal” on you. He’s still in the area and, unless some sort of pressure caused him to move out, he’s conducting business as usual, just a little differently than what you are looking for. When you were watching the sun go down on him during early August, what time was it? 8:30? 9:00? Now it’s September and the sun is long gone at that time. He may be coming out at the same time, but the darkness just caught up to his patterns. There are still ways we can put ourselves within striking distance of him during the daylight. Let’s take a look at how to solve this puzzle.

First of all we must talk a little bit about “patterning” to begin with. Some of the things I have seen in print would lead you to believe that bucks have some sort of internal alarm system that tells them where to go and what to do at any given time. In 40 years of bowhunting and observing whitetail behavior I am becoming more and more convinced that what we refer to as patterns are really overrated. Sure, individual bucks tend to bed in the same areas given the same environmental conditions, and they tend to feed where the best available food is found, but that’s about all that’s cast in stone. 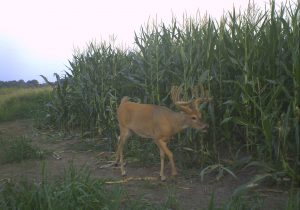 It seems to me that bucks have an instinct to switch things up occasionally, because the ones who don’t are more likely to be turned into venison than those who do. A buck gets up from his bed, stretches a little and heads down the trail towards somewhere he knows he can get a bite to eat. He comes to a fork in the trail and instead of going left like he did for the past three days, he goes right. He doesn’t know why he went right, any more than the guy sitting in the stand wondering why he didn’t show that night. Some deer are fairly consistent, some are frustratingly random.

Trying to pattern deer is like pushing a rope. You simply can’t make any headway. It would help us all to put the idea of putting a deer on a specific schedule and think more in terms of trends and tendencies. We will be better off and a lot less frustrated if we do. If we think in terms of what the buck might do on any given evening based on the environmental conditions (temperature, wind speed and direction, etc.) we can get ahead of his movements better than we can if we concentrate on what he has been doing. Of course we are not going to throw out all our observations of his behaviors we have stored in our memory, but we should just view them as one small piece of the whole puzzle rather than the complete picture.

Key #2 – Mistakes can be deadly

Some deer are prone to be homebodies and some range widely. GPS studies have shown that some deer have very small home ranges and others travel quite a bit. One thing that these studies have shown us is that most bucks have at least two home ranges that they know well; they can exit one and enter another when they feel hunting pressure.

If you have a buck that disappears on you for a while, he may be in a secondary area. The worst thing you can do is get aggressive and try to move in and find out what happened. You want him to settle back into a comfortable mode when he arrives; if he smells you or sees more disturbances, it’s another strike against you. 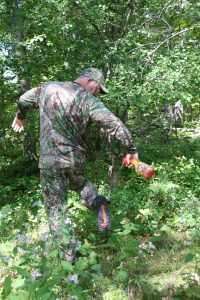 If the buck figures out he is being hunted, you chances of putting your tag on him plummet. When he senses intrusion in the way of ground scent, sudden changes like the appearance of a trail camera or a bunch of cut branches, he may bug out for a few days. If he smells you directly or has a bad experience such as a situation that causes alarm, he may be done with that particular spot for the season.

It’s hard to sit tight when you really want to know what’s on that trail camera, but you are much better off to wait for a light rain that will smother your ground scent to go check it. There’s no faster way to kill a spot than to walk in and check your trail camera every day. Put the stands up early and trim shooting lanes well before the season. No matter when you go into the woods, minimize your scent impact.

One of the biggest mistakes you can make is to hunt a stand on opening day when the conditions are not right. Patience is critical. You may only have one chance, so you want to make sure you have the odds stacked in your favor. If the wind isn’t right, hunt somewhere else or don’t hunt at all.

It pays to be familiar with the preferred bedding areas. An entire book could be written on how deer choose beds based on the conditions through the year. I couldn’t cover it all here, but I suggest you learn a basic understanding of how bucks like to bed where they can see in front of them and smell what’s behind them, which is what they tend to choose when the weather is pleasant. This might be just below the crest of a ridge where the wind is coming over the top, or tucked in behind a large fallen log. When the weather is bad, they tend to hole up in thick cover. This may be a thicket or a creek bottom. You get the idea. 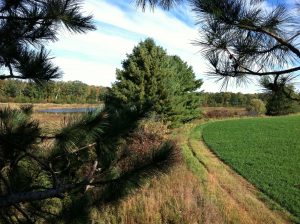 Because the daylight hours are shortening, you have a better chance of contacting the buck in the daylight if you are close to where he spent the day. It’s a tricky proposition to get a stand as close to the bedding area as possible without giving yourself away, but these stands often pay off if they are hunted at the right time under the right conditions.

It goes without saying that these stands need to be in place well before you plan to hunt, but there is one other option. I have used this tactic just once and I was successful so I’ll pass it along. During the middle of the night when the deer were out feeding, I moved in and hung a stand along a bluff near where the deer were bedding in a creek bottom. The trail was getting a lot of use and my camera showed that my buck was using it regularly, both prior to sunset and at dawn.

I hung that stand by headlight and didn’t trim any shooting lanes or otherwise disturb the area. I got in and got out and I actually got lucky because a heavy dew was on the vegetation which really knocked down my scent. Get close to the bedroom if you can figure out a way to get away with it.

Like anyone else, I am always tempted to set up right on the edge of the field when I know the deer are feeding in the field with regularity. I want to see what’s going on out there! But that’s rarely the best stand location unless the deer are feeling no pressure at all. While the does and young bucks may casually walk out into the field, the larger bucks tend to hold back and see how things go. You have a better chance at them if you do to.

There are two specific things I look for when choosing where to hunt back off the edge of the field. What I call staging areas are places where the bucks will hang out for a while before entering the open spaces. Parallel trails follow the edges of the field sometimes for quite a distance.

A buck may arrive at a staging area well before dark, but choose not to enter the field until dark, or he may just hang up and patiently watch for a while. He can observe the body language of the deer in the field and enter when he feels secure. 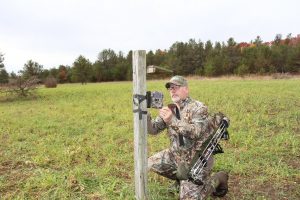 These staging areas have a couple things common to them. First, they will have some visibility to the field itself. This may be a hillside where he can look down on the field or it may have a patch of more mature, open timber that allows him to observe the activity in the open area. Secondly, they will have sign. Bucks aren’t going to just stand there; they are going to do buck things, like scraping, sparring and especially rubbing. Rubs are a dead giveaway, lots of tracks are often found if the ground is conducive to leaving imprints. Sometimes if you are observant you will see where they have nibbled on plants and messed up the ground litter in their scuffles.

Parallel trails are usually very indistinct trails and often are very difficult to discern. Usually the brush right on the edge of the field is thicker because it gets more sunlight than the area just back under the canopy. Imagine yourself walking along the edge of the field from 20-30 yards off the edge, weaving your way through the trees, taking the path of least resistance. You are probably following a parallel trail. The more deer that use it the more obvious it becomes.

These trails are an often overlooked place to shoot a buck. Mature bucks like to walk along the edge of the field, scent checking the field for danger and to find out who happens to be out there

In case you haven’t noticed, I’m advocating patience with regard to hunting these opening day or early-season bucks. Like you, I’ve been waiting all year for this day but I have too many times been overcome by the temptation to get out there and make it happen. The results have usually been less than stellar. The times I have been successful have been the times I waited until the conditions were in my favor. I know the buck of my dreams is being patient right now; his life depends on it. I’ve learned to be patient too, because… well, the buck’s life depends on it.