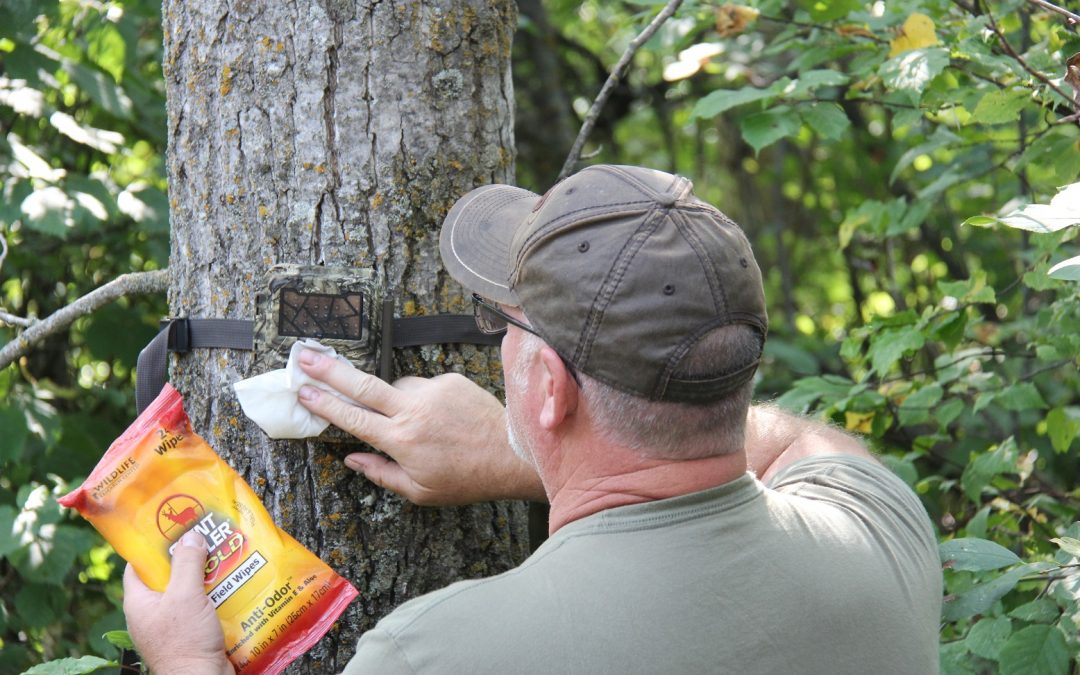 Controlling human odor is a multi-billion dollar business in the hunting industry. Many people are in search of that mythical “scent elimination” nirvana which when found will forever end the frustrations of a deer smelling them and reacting in their typical negative way.

Of course total scent elimination is a myth and probably always will be, but hunters spend millions each year in hopes of at least reducing their scent impact while hunting. There are some great scent killing products that have been shown through scientific tests to kill human odor, and many of them are remarkable effective. So hunters continue to spray themselves down with Scent Killer each time they head out to the treestand. At times the act of reducing your scent can be a deal maker or deal breaker. In the right situation, it might just be the difference between getting a shot versus watching the north end of a southbound whitetail buck heading for the hills. 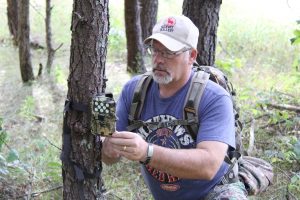 What many of them do not realize, is that the impact of their scent can tip off a whitetail buck not just when they are hunting, but even before the season starts, and during the season whenever you are in the deer’s zone of awareness. The cumulative impact of leaving human scent in a deer’s area, especially a mature buck, can cause that buck to simply pack up and move to a place where he isn’t as disturbed. At best, it might just make him go nocturnal, thus reducing your chances of getting a shot at him.

Most hunters find themselves in the wood for three reasons other than actually hunting. Here are a few tips on reducing your scent while scouting, hanging stands and checking game cameras.

In 40 years of bowhunting whitetails, I have come to the conclusion that I have done the most damage to my hunting efforts by tipping the deer off to my intrusion while looking for their sign. A big key to killing a big buck is learning his tendencies. I like to know his preferred bedding areas and his preferred feeding areas whenever possible. Two of the best ways to learn those areas are finding sign of his presence and first hand observation. 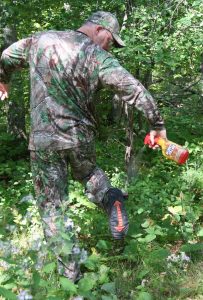 Tracks, rubs, beds and trails are all good indicators of a buck’s presence. I have become convinced that the best way to learn his patterns is to get out there and look at the sign first hand, just one time, and to reduce your impact while doing so. I spray the lower half of my body—anything that will rub on the vegetation—with Scent Killer each time I go out. I also wear camouflage and walk carefully as if I am actually hunting.

First hand observation for me is usually setting up on the edge of a field and glassing for evening activity. I do this glassing from my truck with a window-mounted spotting scope whenever I can, but if I am walking out to the field, I will only do so when the wind is right and I can sneak in and out undetected, never allowing my scent to blow across the field or into the bedding area at any time.

This is where a lot of people blow it. I know I have really screwed up a couple times by doing it wrong. To put up a treestand, especially for bowhunting, you have to get right smack on top of their activity area and that’s dangerous. We have already discussed the importance of spraying down with Scent Killer anywhere on your clothing that might come into contact with vegetation. Two more things can really tip a buck off to your activity, things you touch with your hands, and drops of sweat. 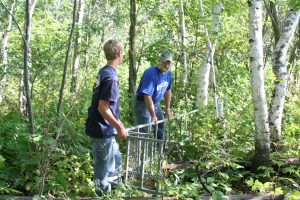 My strategy for hanging stands involves getting in, getting set up, and getting out as soon as possible. I do this on days when the wind is right so I do not have any scent stream blowing into the area I suspect the deer may be at that time. I also prefer to do it with two people because it seems to go much faster, which offsets the impact of having double the scent in the area. Using two people also helps make sure you get everything to the location and set up in one trip rather than two.

Wear clothing that will wick sweat and always wear a hat or headband so you do not drip sweat onto the ground or your equipment. Set up as early as you can; once you have confidence that you have found the right spot, make a move on them so the area has time to “cool off” before you hunt.

Game cameras have become a huge part of my hunting and scouting all year long. I confess I am borderline addicted to using them. I have had to force myself to reduce the number of times I check them. Each time I enter the woods to check the camera I am leaving scent and potentially spooking deer by bumping them. I try to check my cameras only once every 2-3 weeks in the preseason, and whenever possible, I check them right before a rain that will wash away my scent. I even use scent killing wipes to remove my odor from the game cameras. 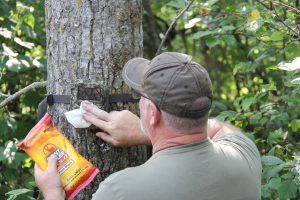 I wear rubber boots and reduce my odor impact with Scent Killer. I used to make an effort never to kneel down by my cameras, but as my knees have gotten older, that has become harder so I do check them on one knee at times. The real key—at least for me–with these game cameras is to resist the temptation to check them too often.

Scent control and reduction is not just for hunting season. Take these precautions during your preseason work; while you are trying to pattern the deer in your hunting area. Over time, you will notice a difference in the number of mature deer you see during the hunting season because you have not given them the opportunity to pattern you.