Don’t wait until the last minute. You can increase your chances of shooting a nice buck this fall by doing some preliminary work in the summer.

If you’re sitting here reading this deer hunting magazine in the summer, I’d say it’s safe to assume you’re a pretty serious deer hunter.  Like most deer hunters, I think about whitetails year ‘round, but most of my preparation and scouting activity is done just before the season opens. Most years I hunt from opening day right through the final bell. However, these days I find myself involved in deer hunting tasks year ‘round, especially in the summer. I like fishing as much as the next guy, probably way more than most, but I believe it’s really important to take a few days to concentrate on hunting chores during the summer months. I have found that there are a few specific things I can do during the dog days of summer that will significantly up my odds of shooting a buck in the fall.

Preseason work has been paying off big for me. I have gone into each hunting season feeling much more prepared and confident that ever before and my success, especially in the early season, but really all season long, has proved the value of this preseason work. I encourage you to take some time to do these five tasks and I think you will agree that they are well worth it.

Saplings and brush grows up around your treestands every year. If you wait till the last minute to trim it, you may alert the deer to your presence. They know their woods intimately, and some fresh cut trees lying around right before the season opens might put a mature buck on edge. 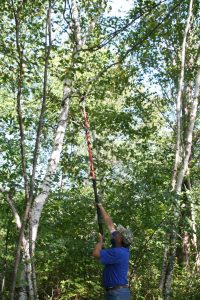 In the summer, you don’t have to worry about drops of sweat on the ground and you can pile the trimmings in a way that will move the deer past your stand. Using a pile of brush to gently guide movements only works if it has been done well ahead of time. Some of these subtle brush piles can make the difference between having a deer move past your stand out of range versus have the buck you want standing right in your shooting lane.

This guiding doesn’t have to be a big operation. Even a couple limbs can cause the deer to alter their movement by walking around them rather than pushing through. On private land with permission, you can even hinge-cut a tree and drop it across a trail to block it.

My friend and Iowa big buck nut Jon Tharp taught me this one, although he says it didn’t originate with him. During the winter, Jon does his hinge cutting to improve the amount of sunlight getting to the forest floor, but in the summer, he actually creates deer beds. That’s right, individual beds where he wants the deer to lie down. 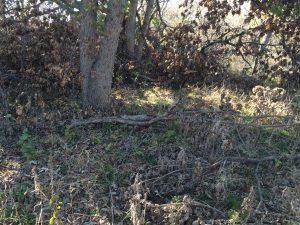 Bucks do not like to lay on sticks and stones, so you can make a nice bed with a rake by clearing out a small area. Bucks like to put their back against some kind of structure just like a big bass would, so deer beds are best made with some kind of cover next to it. A downed log or deadfall tree is great; a small brushpile works as well.

Bucks will bed down where they feel secure and you can create a feeling of security for them that will keep them from wandering over to the neighbors by making a group of individual beds that allow them to see what’s in front of them and have a barricade behind them. By doing several at differing angles, you allow the buck to use the one he prefers in various wind directions.

You don’t have to be a farmer to plant a food plot. There are a couple simple tactics that work very well with little effort. You can till up a small clearing in the woods and rake in some brassica seeds. Plants like turnips, kale, forage rape, sugar beets and radishes all work really well.  The best time to do this is early August right before a rain. Deer do not pay much attention to these plants as they grow throughout the late summer into early fall so they have time to become established. But once cold weather arrives, the deer pound them. These plants become more palatable after a hard frost turns the starches in them to sugar. The deer are piling into them during the early archery season. Perfect timing. Strike right away because they get cleaned up quickly. Another easy plot can be created if you have a treestand on the edge of a crop field. By raking these seeds right between the rows of corn or soybeans in front of your treestand, you’ve created a mini food plot of your own. OF course, if you don’t own the land, you’ll need permission, but most farmers will allow this. The might look at you a little funny until they see the results, but it can’t hurt to ask.

When the corn or beans are harvested, the brassicas are sitting there ready for the hungry deer. With the right planting timetable, these little secret spots are often at their peak in perfect timing for the October archery seasons.

Far too many hunters wait until just before hunting season to put out their scouting cameras. I have a half-dozen cameras working all summer. I have them on mineral sites and in bedding areas. Not only is it fun to watch the bucks’ antlers grow and the fawns rapid daily maturing, but you can learn a lot about the deers’ preferred travel corridors. This is important information that will help you pattern the deer later on. In the summer, you can be a little more aggressive about moving about in areas the deer are using. While you would never consider violating a buck bedding area during the fall, you can safely check a camera in there every couple weeks during the summer. Spray down with Scent Killer to reduce your intrusion and check the cameras no more than twice a month. Check just prior to a rain whenever possible.

Additionally, cameras help keep tabs on which bucks are in the area. By taking an inventory of them, you can make a “hit list” or at least have a feel for the property’s potential. Without a knowledge of what bucks are living in the area, you might decide to hold out for a 140 class buck or better when there aren’t any.  Possibly the best way to get an inventory of the deer is with a pile of corn near their normal feeding area. You’ll get a picture of most every deer in the area within a week or so. Check your local regulations before doing so.

Spend time behind a spotting scope

By the end of July, bucks have their headgear nearly fully grown. At this time, they may be more visible during daylight than any other time of the year. They readily feed on soybeans and alfalfa during the last couple hours of daylight. Find a high point where you can mount a spotting scope to your truck’s window and watch their evening movements into the fields. This will help you keep track of the bucks and where they like to enter the field in the prevailing conditions. Take not of the wind direction and where the bucks enter the fields during these conditions. This info will help you choose stand locations. 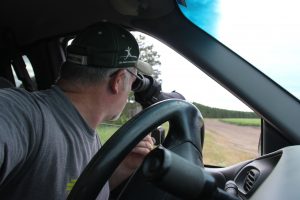 Bachelor groups of bucks are together at this time and nothing makes your heart beat faster than seeing a bunch of nice bucks together in a field you will be hunting in just a few weeks.

So don’t spend all your time lying by the pool or fishing in the summer. You could be missing out on some enjoyable work that could pay off in a big way when the season rolls around. Consider trying a couple of these tactics and just see if it doesn’t improve your hunting come fall.

Most of these tips are aimed at people who hunt private land. It might surprise you to find that you can use all five of these strategies on public hunting land in many states. Until a few years ago it never occurred to me to improve deer habitat on the public land I hunt, until one day when I was scouting I came across a half-acre of nice green plants. Seems someone had planted a small food plot of forage rape in a natural clearing right front of their treestand. Certain that this was illegal on state land, I called up the game warden and was told that there is no law against it in Minnesota.

From that point I realized that there are many things I could do to improve even the public hunting properties I hunt. I have improved the bedding areas, created deer beds, inventoried the deer, altered travel patterns by blocking and improving trails and even scattered seeds of plants deer find desirable.

Of course by helping yourself, you are helping everyone else that hunts that land. And there is the possibility that you may arrive to hunt and find someone else taking advantage of your hard work, but I have found that more often than not, most other hunters do not even notice the improvements I have made and I now know some things that most hunters don’t, such as where the bucks are bedding and how they are travelling through the property. I have a better inventory of the bucks that live on the property and their feeding and bedding patterns.

For sure, check your state laws before you do anything. Each state is different in their laws, and many public lands are county or federal, which brings even more possible liberties or restrictions into the mix. And there are normally workarounds you can use. For example if it’s not legal to cut brush to direct deer traffic, you can pile dead branches you gathered from the area. Be creative!