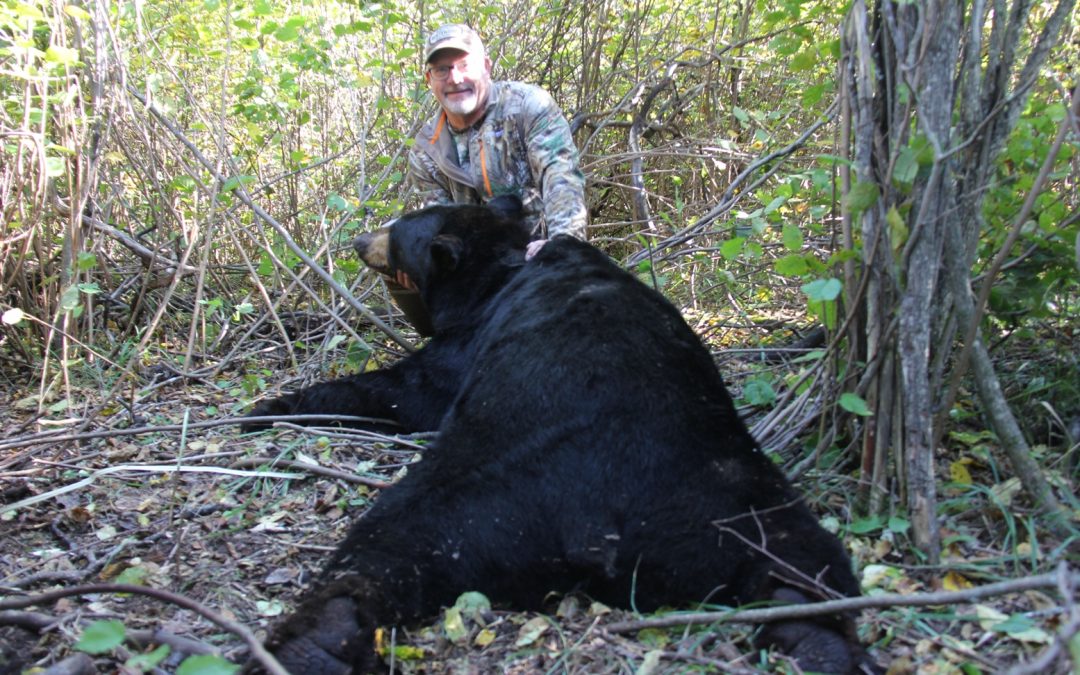 In fact, don’t shoot any bear on the first day of a six-day hunt. Unless… well, never mind.

My adventures with Grandview Outfitters in Manitoba have been well-chronicled in blogs, magazine articles, online and on You Tube over the years. Tom Ainsworth has put me on incredible numbers of bears, plus color bears and even big bears. The hunt I experienced in 2015 where I saw 20 different bears in four hours, topped off by shooting a B&C bruin, was one I thought I would never be able to top. Until 2016 came along, that is. 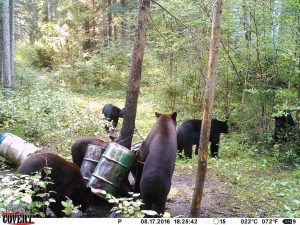 This photo sent to me by Tom just before my hunt made it clear that I was going into a “Target-rich environment.”

I have thrown my life into accomplishing some goals as a bear hunter. I admit it has all the hallmarks of an addiction. I have always wanted to shoot a B&C bear, and a 500-pound bear is sort-of the hallmark of a true giant, so put that on the list as well. But the one that really eats me up is the desire to shoot a bear from each of the four major color phases, black, chocolate, blonde and cinnamon. And if all this goal-setting doesn’t seem crazy enough, I want to do all this with a bow and arrow.

Each spring for five years now I have headed to the Duck Mountains to hook up with a blonde bear. I have the other three colors so the blonde is the one that keeps me awake at night. I came close to getting one in 2015, but didn’t close the deal. The spring of 2016 had me holding out hopes that I would accomplish my goal. Tom has three baits where blondes had been seen in the past three years and I figured I could put myself in position, with Tom’s expert help, and close the deal.

But it was not to be. I had one bear in front of me several times that was nearly blonde on its back and sides, with cinnamon legs. A beautiful bear for sure, but no matter how hard I tried to convince myself that this bear would satisfy me and everyone else who saw it, it just wasn’t blonde enough.

Rather than fill my tag on the last day with a nice representative bear, like I have done in the past, I decided to pocket my tag when Tom invited me to come back and have another try in the fall. He offers deer hunts as well, and having seen some really big bucks in that area, I decided to combine the hunts. The bear season opens the last Monday in August and the archery deer season opens the first Monday in September. Perfect. 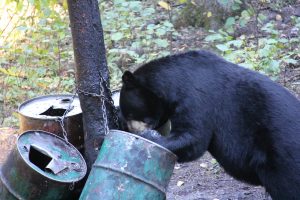 When this giant bear came in, I just took photos. But when he left, I was overcome with remorse.

Arriving in camp the end of August, I found Pennsylvania hunter Jim Roth and his wife in camp as well. Tom doesn’t offer fall hunts because normally all of his hunters fill out in the spring. But occasionally, a hunter is too selective and then finds himself going home without a bear. Since Tom would have two baits going for me, Jim was also invited back to fill his tag. Jim was committed to shooting the first big bear he saw.

Tom showed me a few scouting camera pics of some bears at one of the baits, and it was pretty clear that this was a target rich environment. In many photos, there were big bears, multiple bears and color phase bears. One of the pics had six bears within sight of the Covert camera at once, three chocolates and three blacks. All nice bears.

Having taken a bear on the first night’s hunt in 2016, I committed myself to holding out for a couple days. I had a week before deer season opened, so I was in no hurry. So when I arrived at the stand in the middle of the afternoon, I looked at my video camera and promised I would not shoot a bear the first night. And I meant it.

As usual, I had bears around me right away. In fact, a yearling cub was in a nearby tree as I settled into the stand. Within 15 minutes, more bears started to appear and move around the bait. I had sprinkled some Northwoods Super Sweet Cherry Burst powder around the bait, and the bears were all over it. Over the next two hours, I enjoyed the view of bears interacting, fighting, scratching trees, feeding, chasing and in general just being bears around a bait site that’s the hub of area activity. I had seen 11 different bears, surprisingly all males, including a couple really nice boars. This aspect of bear hunting is one of the most rewarding parts of being patient and waiting for the right bear. 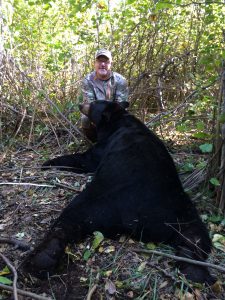 Suddenly, the bear standing at the barrel dropped down on all fours and slipped quietly into the dense underbrush behind the barrel. He had clearly seen something that scared the bejeebers out of him. I scanned the brush in the direction that bear had last looked and my eyes soon settled on a patch of black. Cautiously this bear moved towards the bait and everything became perfectly quiet as every other bear had simply vanished.

When he stepped into the open, it was clear why. This bear was a prime specimen, like a million-dollar angus bull, his size and structure dwarfed every other bear I had seen. This was a giant, mature bear in the prime of his life. I watched that bear feed and analyzed his size as he stood near the barrels. I quickly became convinced that I was looking at the largest bear I have ever seen in a wild, hunting situation.

But my commitment was strong and I did not shoot. I admired this bear for about ten minutes, just taking in the amazing sight of a bear this size. I reconsidered my promise to hold off on all shooting the first day a couple times, but I never took my bow off the hanger. Then he walked off the way he had come.

I was suddenly overcome with remorse. I had just passed up the largest bear I had ever seen. One of my goals was to shoot a 500-pound bear and I had just let the first one I’d ever seen walk away! I must be nuts. There aren’t even any photos of blondes on this bait. What was I thinking? I shrunk bait into my stand and tried to console myself. I know these big dominant bears do not visit a bait site often, but he would surely come back in the next six days wouldn’t he?

I finally told myself that I would take the first shot opportunity on that bear if he ever came back, be that the next day or the last day. I didn’t need long to follow through on my commitment. He came back 15 minutes later. As soon as he gave me a quartering away shot, I looked for the last rib, tried to envision the location of his heart, settled my sight pin on my Mathews and touched the trigger. The arrow drove in all the way to the fletching right where I had aimed. The bear ran off about 30 yards and then all was quiet. I desperately waited for a death moan that never came. 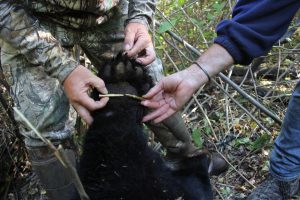 Cell phone service doesn’t allow for a phone call in this area, but a text usually goes through. Soon Tom arrived on his quad with a trailer and my first thought when I saw him was that there’s no way we’re getting this bear into that trailer. He informed me that Jim had a 350-pound bear walk in not long after he got in the stand and he shot it. Turned out to be a female. That’s a giant sow. 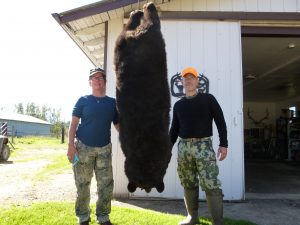 Jim’s 350-pound sow came in early on his first day and he was grateful to have a beautiful bear with his tag on it.

With Tom at my side, our first observation was the point where the crashing had stopped 30 yards away. I was very disappointed to discover that there was no bear located there, but I did find the arrow. The arrow had penetrated enough that the broadhead had exited in the bear’s armpit. The noise had stopped at this location because the bear had stopped and just pulled the arrow on through with his teeth.

Then the bear just started walking. The blood trail was good, it was lung blood and plenty of it. We walked upright following the easy blood trail, expecting to find a bear at any moment, but soon was had gone more than 200 yards and the bear was still walking and bleeding profusely. Both Tom and I was bewildered, but Tom kept saying, “the big ones just don’t like to die.” Then we came across a bloody bed with no bear it in. We must have bumped him. My heart sank; the shot looked perfect, how could this be happening? It was getting dark and we knew it would be a long night, but we needed to make the long walk back to the quads before it got full dark.

The following morning, Tom, Jim and I put on our backpacks and with optimism dove back into the bush. Incredibly, we continued to follow a copious blood trail for another 200 yards or more beyond that bloody bed. We finally found the bear, lying on his back where he had tried to crawl over a downed tree trunk and fallen over backwards. Another bear had come along and torn off his genitals. Add that to the list of bizarre twists and turns of this hunt.

Standing over that bear were three people with nearly a century of bear hunting experience combined, and we all agreed that we were looking at a 500-pound bear. It was clear there was no way to get anything with wheels way back in this thick tangle of Canadian bush, so we set about quartering up the bear. We skinned the front half for a shoulder mount and divided up the loins and four quarters. We had a gigantic load and I really wondered if we could get it all in one trip. Both Jim and Tom are stout guys so they carried the meat while I was wrapped up in the skin, which weighed about 75 pounds. Before we loaded up and took the long walk, Tom opened up the bear and we were all amazed to see that the arrow had passed through both lungs and nicked the heart. 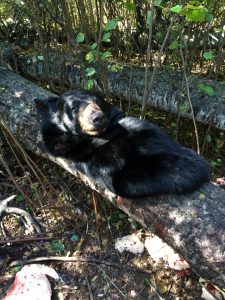 The front half of the skin with head attached weighed more than 75 pounds, making for a difficult hump back out to the ATVs.

A long, difficult hump got us back to the ATVs with only one long rest, but the bear was finally mine. It took the better part of the week for my back to feel healthy again.

I spent the next few days scouting whitetails and drooling over a big 10-point that would occupy my attention for the next few days. I ended up arrowing a great 9-point buck and thinking about how bad I want to go back and keep trying for that big 10.

Next week will have me back in the Duck Mountains trying to lock down a blonde bear. This time I will be hunting with Todd at Baldy Mountain Outfitters, who bought Tom’s business. Maybe this will be my year.

Watch a video of the hunt here: