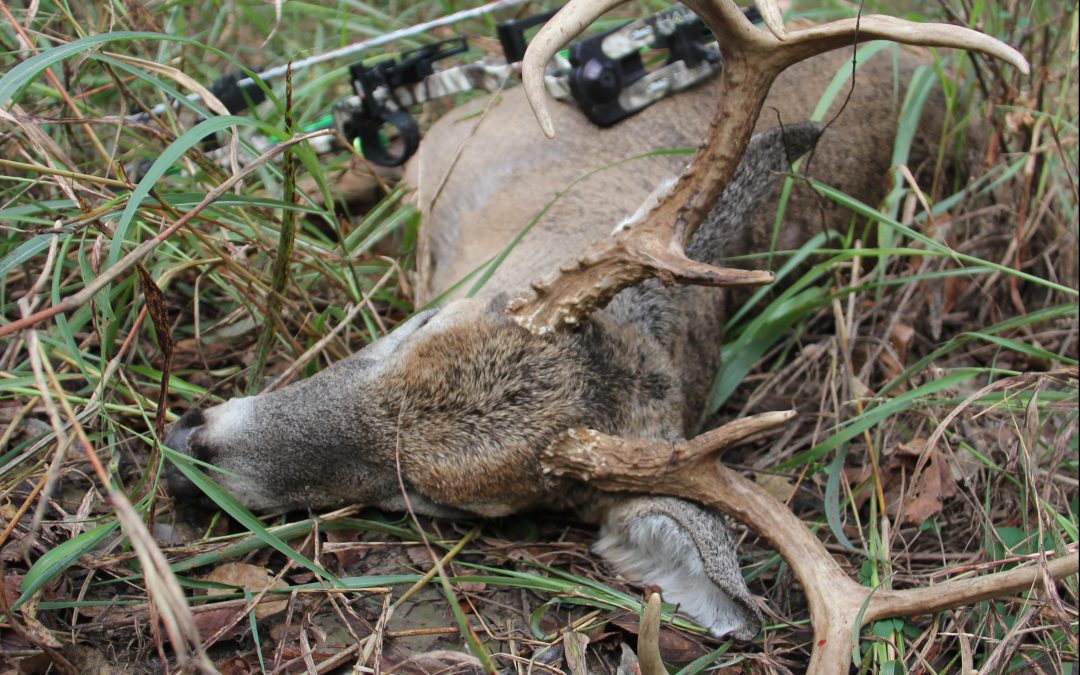 Sometimes public land bucks can be right under your nose.

I had been hunting a public area in western Iowa for the past few days when I became convinced that it was time to make a move. I was headed back to my truck late in the morning: a treestand and backpack were strapped to my back with the climbing sticks in one hand and my bow in the other; when suddenly I got a case of the “quick step.”

The rumbling in my abdomen spurring me on, I decided I could make it over the last small hill to my truck and then take care of business. By the time I got to my truck I was really in a hurry. In the parking lot, I struggled out of everything, leaving it all in a heap, then hustled 20 yards into the woods with a strong sense of urgency.

I was just about to do my business when I looked up and found myself in a stare-down with a buck. His rack was outside his ears, massive and tall. He was 25 yards away and locked onto me. He looked me over for an embarrassingly long time–standing there with my Realtree bibs around my ankles and a roll of toilet paper in my hand instead of a bow. Then he just tucked his tail, lowered his head and disappeared.

Anytime I feel the sting of defeat or embarrassment, I try to analyze the situation and see if there is something I can learn that will help me avoid that feeling in the future. In this case, I been hunting more than a mile from the truck when the buck anyone would die for was only 40 yards from the front bumper, bedded in a little cattail swamp the size of my living room. There had to be a lesson in there somewhere. 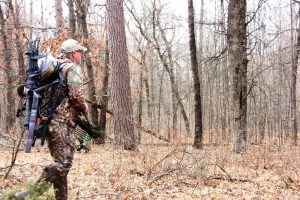 There were, in fact, two lessons to come from this. One, you don’t always have to walk a long distance to get to a big buck, and two, big bucks really like cattails. Let’s deal with the second one first.

A lot could be written about swamps and marshes in whitetail hunting, but I have learned that the sight of a small, dry cattail swamp in big buck country will spin my head around. For reasons I don’t fully understand, bucks love them. In parts of Wisconsin, large marshes and sloughs are ringed with cattails and some of these marshes may be hundreds of acres with a few small islands in them. Hunters who are not afraid of the backbreaking work it takes to hunt these small islands consistently kill big bucks from them. There’s no reason that similar terrain where you hunt wouldn’t be the same.

Most of us who hunt a lot of public land have learned that if we can penetrate a large block of land–get back in farther than most hunters are willing to go—we will find less hunting pressure and deer that are not quite as flighty. But that is not always the case. Some mature bucks become masters at avoiding human intrusion by simply monitoring it and moving accordingly. Like the buck by the parking lot I mentioned earlier, they just have a heightened awareness of the hunters’ movement patterns. They become masters are avoiding it. In fact, I sometimes wonder if these bucks like to spend time where they can keep an eye on the comings and goings. 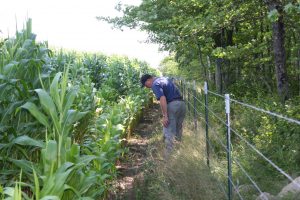 Some of the best places I have found to hunt on public land are the fringes of the property, especially where the land abuts private farmland that offers food. Finding a crop field that is only separated from the public land by a fence can be even better than finding a perfect funnel a mile from the truck.

The smallest pocket of security cover is sometimes all it takes to hide a buck. I once observed a buck run down a fencerow and lie down by a pile of rocks in an Iowa plowed field completely disappearing in the knee-high grass. Shotgun hunters came across the gravel road from the south, moved into the section and began walking that fencerow. They walked right by the buck within a dozen feet, never seeing him.

In another case, I was checking mink traps when I parked my truck on a bridge of a seldom used country road, stepped off the shoulder and waded into the creek below. Suddenly a buck jumped up right beside me and I just about fell over backward into the creek it shocked me so. There were signs that buck had been bedding under that bridge for many weeks.

In another case I was travelling down interstate 35 one late winter day when I saw a shed antler from the road. After some maneuvering to get turned back around and hustle safely across the highway, I recovered the shed from a small depression surrounded by multiflora rose. If I hadn’t glanced at that spot at the exact split second, I would have never seen the antler and I wondered how many thousands of cars had sped by that buck without ever seeing him lying there.

A friend of mine shot a 148-inch buck out of the road ditch, where he had previously seen it hiding near a large culvert. The next time he saw it there, he drove past, parked his truck over the crest of a hill and hurried back in the opposite road ditch. He stepped up on the road and shot the buck right in its bed.

Stories abound of beginning hunters who have set up in totally the wrong place and killed a big buck. Some guy sticks his kid in a spot where his fidgeting won’t bother the rest of the group and the kid shoots the biggest buck in camp. You’ve heard it before. 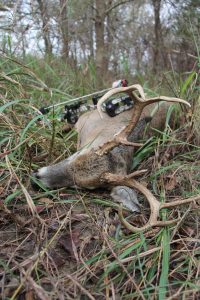 My son Ben was about six years old when he was relentless in his begging me to take him bowhunting. I kept telling him that I couldn’t have him in the treestand with me. One day, he said, “I’ll wait in the truck.” I figured a couple hours sitting in the cab of the pickup while it got dark might cure him of his begging so I agreed to it. I provided him with a coloring book and I parked along the two-track road leading into my friend’s property.

At dark, I arrived at the truck and the first thing out of Ben’s mouth was, “Did you get the buck?”

“Too bad, he had ten points. He looked right through the window at me.”

A little more conversation finally convinced me that he had actually seen a buck. I grabbed my flashlight and checked the two-track road I was parked beside, and sure enough big tracks told the story of a buck that had walked by ten feet from the parked pickup.

Tiny pieces of property on the edges of suburbia produce some giant bucks each year. Small pockets of public hunting lands, even parks, some as small as 5-10 acres offer options for the bowhunter. These bucks become really good at avoiding human contact, but with some work, a hunter can break the code. Don’t overlook these seemingly unexciting nuggets, they may be pure gold.