Facts and Myths About Deer Fawns 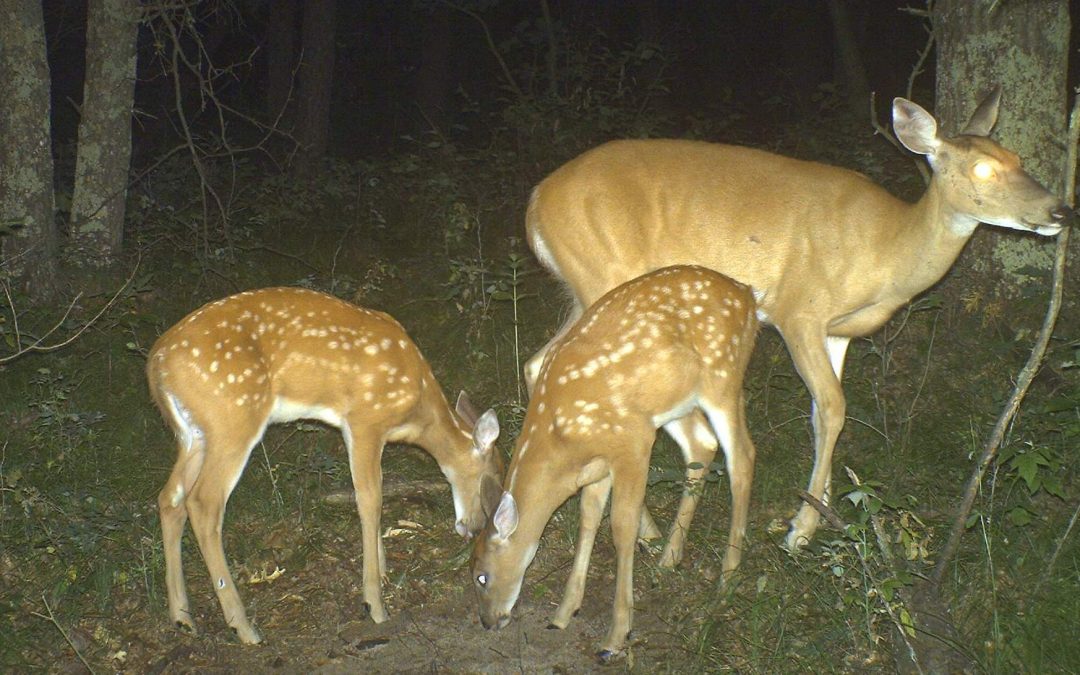 With the spring fawning season just around the corner, here are a few things you probably didn’t know about the fawns of whitetail deer.

My young boys and I were walking across a grassy field on our way down to the riverbank for some fishing when suddenly my son stopped in his tracks. It took him a moment to fully realize what he was seeing, but when he did, he realized we were all standing above a week-old fawn. His first reaction, like that of many people, was that the fawn must be hurt or abandoned, otherwise it would have run off.

The fawn’s mother was not far off, in fact she soon appeared and tried to lure us out of the area. We did not bother the fawn, just enjoyed the moment and then went fishing. Many people have been told that by touching a fawn, your scent will cause the doe to abandon it. This is silly of course, but it’s one of the enduring myths about whitetails. It is often perpetuated by people who want you to leave the fawns alone, and they pass on this myth in their zeal. 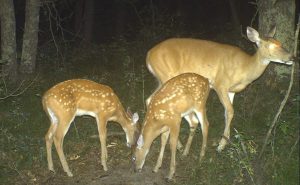 If you find a fawn in a vulnerable place, such as a hayfield that is being cut, there is nothing wrong with picking it up and moving it to the edge of the woods. Put it in a shady spot and allow the mother to find it. If the fawn runs off, do not try to catch it, let it find another hiding spot on its own.

The maternal instinct is strong, and the doe will not abandon her fawn because of your scent. Most fawns are half of a pair of twins, so the other one is nearby. The doe may be off feeding, but she won’t be too far.

Most fawns are born during the month of May over most of North America. The southern half of the US and Mexico may see fawn births much later. In northern climates, a fawn born too early may succumb to the frigid nights or a late snowstorm, and one born to late may not be mature enough to make it through the following winter.

The breeding season in Texas and Florida are in December and January and are much more drawn out that the short rut found in Canada. Short breeding periods allow the fawns to drop at the best time for survival potential. A fawn born in July in Florida doesn’t have to worry about making it through harsh winter weather which will face a Minnesota fawn beginning in November.

Here’s another myth, there is a belief that fawns do not have any smell so predators can’t find them. Coyotes kill up to 80% of the fawn crop in some areas, and they find the fawns by their scent. Bobcats, wolves, bears and foxes all find young venison to be delicious, and all take their toll on the fawn crop in varying degrees. Coyotes primarily find the fawns by cruising downwind of a likely area with their noses in the air.

The other predators mentioned may occasionally find a fawn by actively smelling for them, but more often have two main tactics for eating fawns. Bobcats, foxes and bears generally find fawns by stumbling across the tasty windfall. Wolves on the other hand, often follow the does around the known fawning areas, waiting until the fawns drop, then quickly gobble them up. There are plenty of cases where wolves and coyotes have been observed actually pulling the partially born fawns out of the mothers. This is fairly common in elk and in moose calving.

The fawns are able to walk within hours after being born, and run within a few days. But they are programmed to lie still rather than run for about three weeks. By the time they are about two weeks old, they can outrun most predators. Fawns spend the majority of their time in hiding for the first month of their life. At about six weeks, the fawn begins to tag along with its mother everywhere she goes.

Fawns will start sampling the vegetation around them at about a month old. They soon discover which plants are good to eat and which are not. They probably learn which plants to eat by observing their mother, as well. But they do not begin to depend on food other than milk until they are about two months old. During the first weeks, their entire life revolves around hiding and nursing. 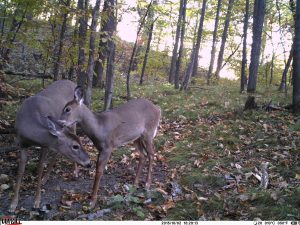 Fawns have about 300 spots, which offer surprisingly good camouflage, especially when lying in the mottled shade of tall plants. They will carry these spots as long as they wear their summer coats. The spots will not disappear until fall, when the heavy coat of hollow, gray winter fur replaces the reddish summer coat. This usually takes place over the first two weeks in September. The fawns are normally weaned during the month of September as well.

Fawns become sexually mature when they are about six months old. In most areas of North America, the majority of doe fawns are bred during their first November, although some of them may not come into estrus until the early part of December. Young-of-the-year does commonly produce one fawn their first year, then twins in each year after. The availability of quality food and water can alter the number of fawns each doe produces. In areas with plenty of quality food and environmental conditions, triplets are common.

As intriguing as it may be to pick up a young fawn–and no matter how much your boys beg you to raise it as a pet–resist the temptation to make the animal’s life any harder than it already is. The odds are stacked against it. Just enjoy the moment and move on.