A Formula for Success: The Wildlife Research Center Story 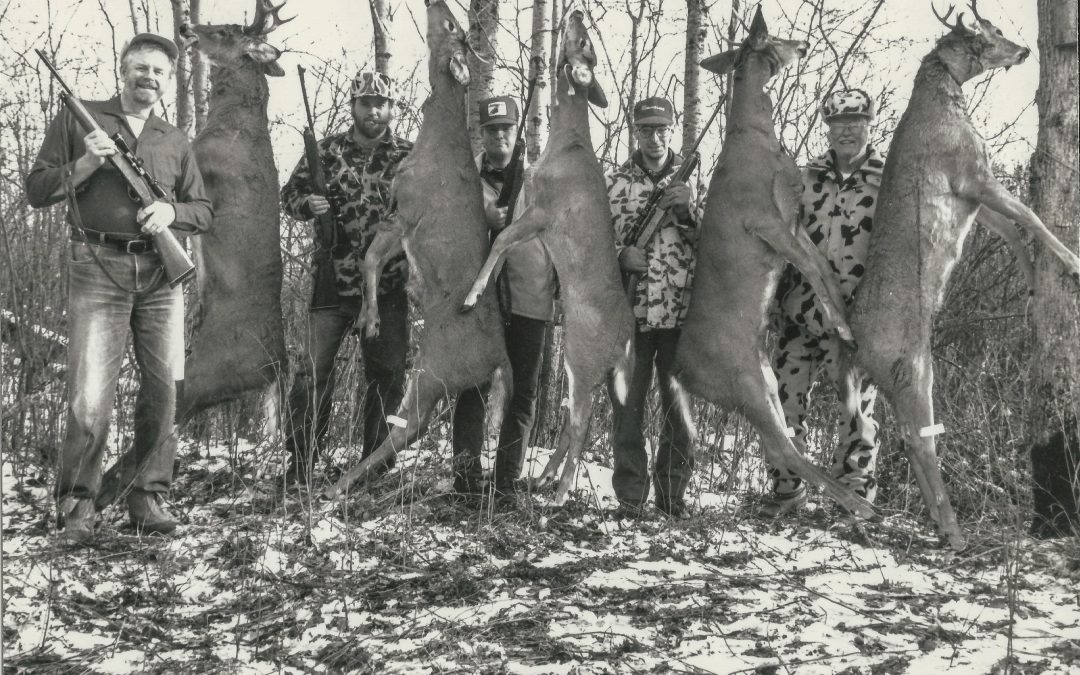 From one deer lure formulated in the garage to a major player in the business of deer hunting, this company encapsulates the American Dream.

John and Brian Burgeson grew up on the outskirts of the Twin Cities in Minnesota. Their dad would pay them 10 cents apiece for the mice they could trap. Dissatisfied with the low number of mice in the house, they began trying to trap mice outside when seeing the tracks in the snow. John worked with peanut butter and formulated a scent that attracted mice very well. He had no idea that interest in formulating scents and luring animals would change his life and put him on a journey that would lead to a powerhouse company in the hunting industry.

John and Brian began trying formulations for deer scents and giving them to their father to try out on his deer hunts. Soon John and Brian were hunting too, and the scent experiment 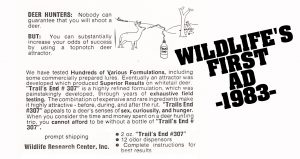 ation was going full bore. They tried about 100 different ingredients, from oils to deer urine and once they found ones that seemed to attract deer, they began experimenting with formulations. Eventually they came up with an outstanding buck attractor.

They named it “Trail’s End” and came up with the number 307 as an estimate, even though they had long ago lost track of how many ingredients and formulations they had tried. Feeling confident it would sell to deer hunters, they chose the name Wildlife Research Center and started running a simple ad in a few magazines.

The brothers owned a tree service which paid the bills, so they were able to put all proceeds back into their small company. Still, it took five years to turn a profit and they didn’t draw any money out until the 9th year. Eventually, they shut down the tree service and ran WRC full time. 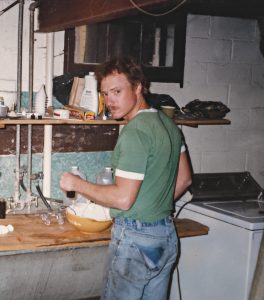 Young Brian Burgeson bottling up some Trail’s End® #307® in his basement, about 30 years ago

At first, the ads didn’t pay off well, but the publicity helped. They sold more by appearing at sports shows and selling the lure in person. John went into small sporting goods stores and tried to sell his products to the owners, but had little success. So he started putting it on the shelves on consignment and sales began to grow.

Their first big break came when they met a fellow at a sports show who worked for Sportsman’s Guide Catalog. The catalog wouldn’t agree to carry the lure, but one of the staff members took it on a hunt with him and was impressed by what he saw. A buck trailing a doe turned and, leaving the doe, came right to the lure. He shot the buck and suddenly The Sportsman’s Guide became WRC’s biggest customer and a catalyst for future growth. 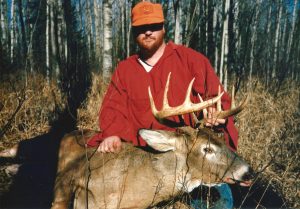 A second big break came when Bruce Hudalla began to rep for them and really helped them get some traction.

While Trail’s End #307 was paying the bills, John and Brian were working on new ideas and products. The second big product was a scent dripper that had a curled tube on it. As the days warm, the pressure inside the container would increase, causing it to drip. Then at night, pressure would decrease, pulling bubbles back into the canister so it would reset and be ready to drip once it warmed up the next day. The ability to apply scent to a scrape during the day and conserve the scent is a big selling point and this scrape dripper is a cornerstone of the business today. 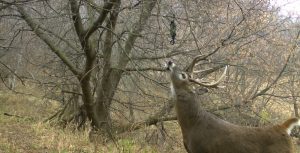 Special Golden Estrus was the first estrus lure introduced and it has been extremely successful. WRC got into the business of human odor control on the ground floor with Scent Killer and it is a big part of the company. Scent Killer Gold is considered an industry standard and offers the benefit of continuing to kill human odor for days after drying and it has no scent of its own.

Overall, the company has a list of more than 100 products they are developing and refining. It’s a slow process and nothing is introduced before its time. New ideas are added to the list all the time. 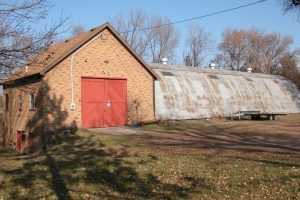 The company operated out of this barn behind John Burgeson’s house for 15 years.

While John and Brian are still at the helm of the company, John’s son Sam has taken over much of the responsibilities as Vice President. Sam studied chemical engineering at the University of Minnesota and joined the company full time in 2006. The company employs about 20 full time people, plus outside salespersons.

Looking back at the 30-year success of the company from its humble roots, the Burgesons can credit their longevity to a few things. Number one would be their willingness to stand behind the products. They believed in them enough to offer a money-back guarantee with no conditions. Secondly would be the exhaustive research and development that goes into every product. And thirdly, exceptional customer service at every step of the way. These things are the formula for success which have brought the Burgesons along for a ride on the American Dream, and great hunting products into the hands of hunters across North America.