Should You Feed Deer in the Winter? 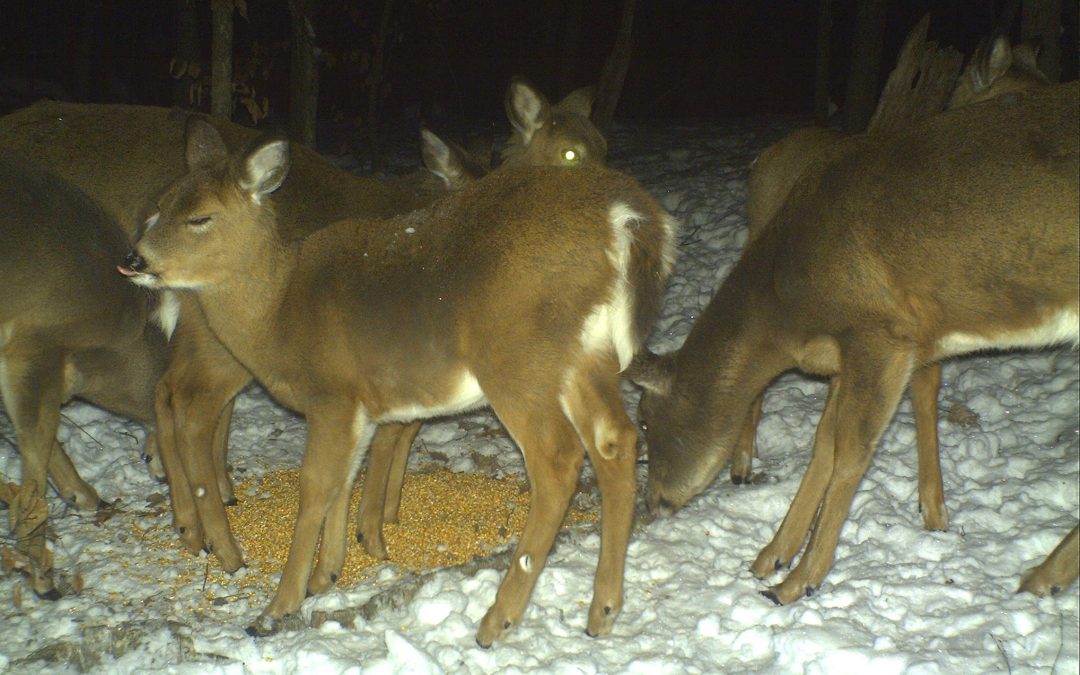 Providing supplemental feed to deer in the winter is controversial and often illegal in some states, but other states encourage and even help fund it. Here’s a look at some of the pros and cons of winter feeding.

The Minnesota DNR has often been opposed to recreational deer feeding, and in fact, with the increased risk of Chronic Wasting Disease and other disease transmissions, there have been discussions about banning it. The winter of 2014 was very difficult winter for the deer northern Minnesota. Deep snow and cold temperatures created conditions where the predators had a heyday with the stressed deer. In many cases wolves moved into certain areas and slaughtered far more deer than they could ever eat. Deep snow made finding food extremely difficult and deer were near starvation by February and March. Despite the fact that the state of Minnesota DNR as often been opposed to winter deer feeding they mobilized volunteers across much of northern Minnesota with snowmobiles to feed corn to the stressed deer herds.

Near my home there was a 20-acre cornfield that did not get harvested before the snow came. There were 60 to 70 deer feeding and that cornfield every night. I had a discussion with a DNR officer about recreational deer feeding about that time. He felt strongly that recreational deer feeding concentrated the deer into areas where they could more likely transmit diseases. My question for him was this, “There are 70 deer feeding in this cornfield; they are nibbling on the same branches, eating fecal matter and chewing on the same corncobs. Wouldn’t it be better to have those deer spread out into a dozen smaller recreational feeding sites at the homes of the adjacent landowners, rather than have them all bunched up in one place? Wouldn’t that cause a reduction in potential transmission of diseases rather than an increase?” Neither one of us really have a definitive answer to that question. 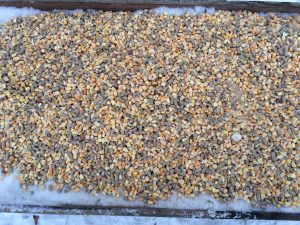 These are just a couple examples of the controversy that surrounds recreational feeding of deer. Let’s take a look at some of the pros and cons.

Opponents of deer feeding feel that providing handouts for deer can make them more vulnerable to negative human influences. In some cases this may be true, and there are specific instances where deer feeding in the wrong areas has caused significant increases in roadkills. Deer feeding during hunting season can concentrate deer into areas where they are more vulnerable to hunters. But ask anyone who has hunted for deer over bait in states where baiting is legal and they will tell you that putting deer in a position where it’s easier to shoot them is a lot easier said than done.

Deer quickly learn when they are being hunted and will go nocturnal. Many states allow baiting of deer but very few mature bucks are killed this way. The human intrusion associated with putting the bait in place is simply more than a mature buck will tolerate. Even younger deer and does learn quickly that feeding under the cover of darkness is their best survival strategy.

One significant issue with feeding deer is the consistency. One of the worst things that can be done is to provide a food source on which the deer become dependent, and then stop feeding for a long period or quit altogether. Either of these can put the deer at significant risk. If the deer are relying on you for a daily food source, do not let them down.

Human predators and not the only threats deer face. Deep snow can cause deer to bunch up around the available food. Particularly across the northern states, deer yards create easy opportunities for predators. When snow makes it difficult for deer to move around, the predators can move in and make short work of an entire herd. I have personally seen this in northern Minnesota where a pack of wolves decimated a herd of more than 40 deer in one week.

Wolves are controversial enough but when things like this happen, the anger rises quickly. Contrary to what wolf lovers would like you to believe, wolves do not kill just what they need to survive and no more. Put yourself in a wolf’s shoes (paws) for a moment and think of it this way: you know where there’s a lot of deer, so you go kill one and eat your fill. The next day you’re hungry again, so you go back and you have the option of gnawing on a hunk of frozen meat or, with very little effort, grabbing a hot meal. Which option sounds the best to you? That’s why wolves can wipe out so many deer in such a short time. 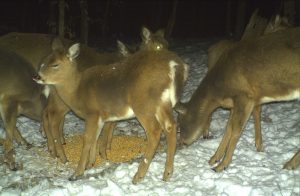 Other predators also capitalize on vulnerable deer. Coyotes, mountain lions, feral dogs, even bobcats and eagles have been known to feast on the easy pickings. Keep these predators in mind when you choose your deer feeding location. It’s best to utilize several smaller feeding sites rather than one large one.

High-carbohydrate foods are needed to get deer through the winter because they produce quick energy and body heat. But radical changes to the deer’s diet can be harmful and in some cases fatal. Introducing a source of corn to very hungry deer when there is very little other food available can make it very difficult for the deer to digest the corn. When deer are feeding on woody browse, their stomachs are adapted to digest that type of food. They do not have the ability to change quickly in a sudden introduction of large quantity of high carbohydrate food can cause acidosis which can make them sick and in extreme cases can kill them.

For this reason it’s best to introduce alternate food supplies well before winter hits so the deer’s digestive system have plenty of time to adapt. In cases where corn is being introduced to help starving deer it’s best to introduce small amounts of corn in multiple areas. Or better yet, introduce a mixture of feed with a mixture of carbohydrates and protein. Some companies make deer feed which includes other grains and proteins in addition to corn.

The real bottom line is that a deer’s stomach will tell it what it needs to survive. They will not commit suicide by eating corn. But we must be careful that we do not make radical changes to their diets or put them in positions where they are more vulnerable than they would be if we did not interfere. We must also choose carefully where the deer feeding will take place in order to avoid endangering them. Recreational deer feeding can provide entertainment for wildlife lovers and a benefit to individual deer and improvement of deer populations if it’s done in a responsible way.