How to Pattern Late Season Bucks 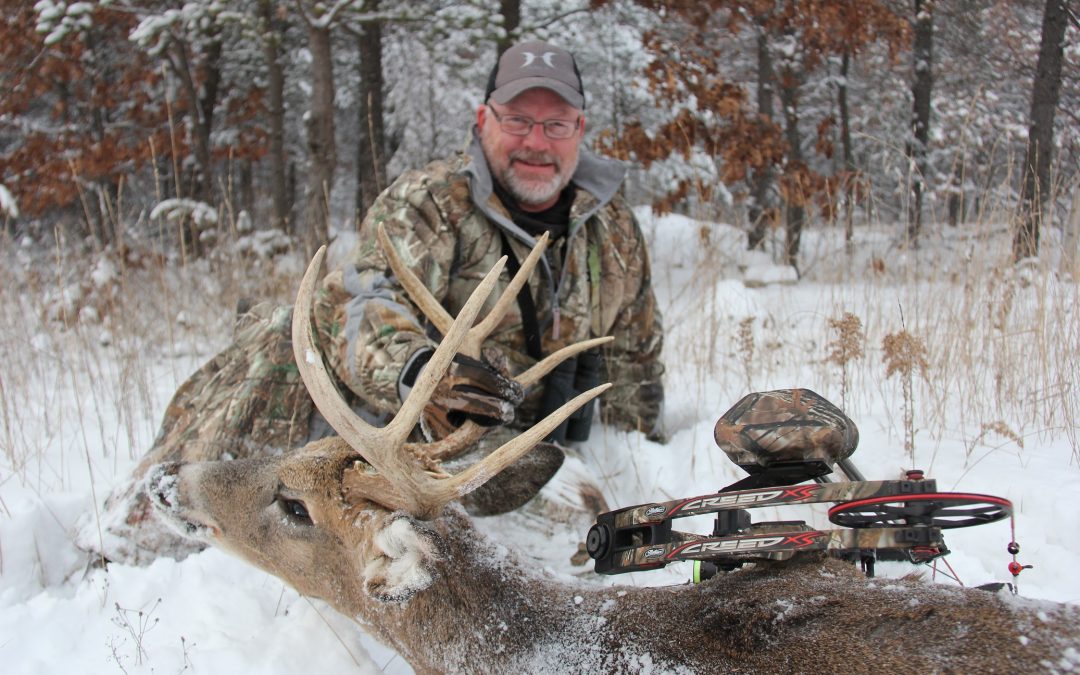 Following the rigors of the rut, bucks need to replenish body condition and body fat. They instinctively know what food will bring them back into form. They revert to a very predictable daily pattern of feeding to bedding. Here’s a primer on how to take advantage of this window of opportunity

Despite the snow swirling around me, I pushed through the thick brush, spurred onward by an unfilled buck tag in my back pocket. Arriving at the edge of the field, I could see there were a few deer already feeding in the corn stubble, but neither of the two bucks I was after could be seen. I carefully climbed 20 feet up into my treestand, swept the snow from the seat and settled in. By the time I got my bow towed up on the haul rope, a buck appeared at the woods line and began to move across the field towards me. My plans for a long cold vigil suddenly changed and this buck’s appearance created a flood of optimism that this night might be the night. I love hunting the last days of archery season despite the nasty weather because I have so many good memories and successes to show for it. 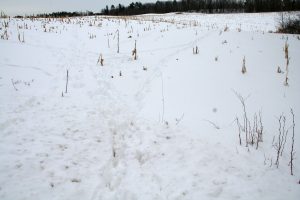 Many states have bow and muzzleloader seasons that last beyond Christmas and well into January. Shooting a buck at this time is often thought of as a difficult task because the cover available and the habits of the deer are not what they were during the majority of the season. But getting within bow range of a buck at this time is a lot easier than you think if you know what to look for.

The key for me has been the understanding that the deer have different needs during cold weather than they do during the rest of the hunting season. Remember a few years ago, when the Adkins diet was a craze? People were losing weight by forsaking carbohydrates and consuming more protein. Now bear with me for a minute, I am not off on a rabbit trail, this has everything to do with late season deer hunting.

The Adkins diet is based on the differences between proteins and carbohydrates. In short, “carbs” are more easily stored by your body than protein. Protein is used to build muscle and is used up quite quickly by the body. Most proteins are not easily stored. Carbs on the other hand, are primarily composed of sugars, and your body is very good at converting carbs into storage for use at a later date. Storage, of course, is in the form of fat. Your body naturally wants to maintain what it’s got. Like most diets, this one starts to get hard when you begin craving the carbs your body is missing.

Whitetail deer crave certain foods too. Like your body and mine, a deer’s body sends messages to its brain that it needs certain nutrients, and the deer naturally seek out the foods which contain those nutrients. So a basic understanding of which foods in your area contain those nutrients can go a long way towards understanding where the bucks will be feeding on any given day. There are three macronutrients that all humans and animals need: protein, carbohydrates and fats. Understanding when bucks crave these nutrients and where they will find them goes a long way towards figuring out their movement patterns, particularly during the late season when their patterns become quite predictable. By examining where the deer find what they need to eat on a daily basis, and where they bed, we can put together a pattern for intercepting them on their daily travels to and from these locations.

Why Deer Crave Protein and Carbs

Bucks eat little during the rut and they are on the move at all hours of the day. After the rut, bucks are run down. Their fat reserves are gone, and even their muscle mass is diminished. Nothing restores muscle faster that protein, and soybeans are loaded with protein. Field corn is very high in carbohydrates. Most mast crops are super high in carbohydrates and fat. Acorns, especially the meaty varieties like those from white oaks, offer a large dose of fat and carbs. Honey Locust pods are high in proteins and fats. You get the idea. The key to a whitetail in the late season is through his stomach.

High carb foods provide energy to create body heat. Corn fields left standing in December into early January will be swarmed by deer. In cut corn fields, deer will glean waste corn from the ground as long as it is available, and they can easily smell even a single kernel through a foot of snow.

Interestingly, deer can eat raw soybeans; which are toxic to humans and any animal with only one stomach. Because deer are ruminants, their stomach saturates the soybeans before they are regurgitated and chewed, which renders them digestible. Since soybeans provide quick energy through a combination of proteins and carbs, deer will often seek them out during the coldest weather. A stretch of below-zero weather will move deer off the corn and acorns and onto the soybeans because of the quick turnaround of energy they offer. During these periods of deep freeze weather, immediate energy is more important that storage of fat. Food plots of soybeans or late-standing soybean fields attract more deer than corn does during the harshest weather. When the weather moderates, they may move back to the high-carb food sources.

Standing cornfields offer a combination of bedding cover and feed. During mild stretches of the early winter, deer often stay in the corn around the clock. They feel safe in the cover and it provides protection from the wind as well as food within reach at all times.

So bucks are see king out specific kinds of foods based on which foods are higher in either carbs or proteins and they will gravitate towards the food sources that offer the combination they need at that given time. But mature bucks especially do not blindly wander around looking for these foods, there are other factors involved.

By the time the rut is over, most northern farm country is covered in a layer of snow and cold weather has set in. A buck’s daily activity pattern is a trade-off between security and the need for high-quality food. The need for sustenance often becomes so strong that they will take risks that they would not take at any other time during the year. You may see a buck feeding in a cut cornfield at 3:00 in the afternoon. But that will only be the case if there is escape cover nearby.

A mature buck will not feed in the open unless he feels secure and has an avenue of escape. The best places to find these afternoon feeders is where they have a brushy draw they can dive into at the hint of danger, or possibly a creek-bottom thicket along the edge of the field; I have even seen them disappear into a big field of tall cover such as switchgrass or scrub cedars.

If you can find these avenues of escape, you have the beginning of a pattern that could put that buck in your truck, because these bucks will often enter the field from this escape cover.

When not feeding, bucks need to feel secure in bedding areas that provide them protection from the elements. Thick cover offers protection from biting winter winds, and on cloudy or snowy days, most deer will be tucked in tight right in the middle of the thickest stuff around. And they will use the same beds day after day.

Mature bucks tend to bed on the south side of the cover, and they often lie with a fallen tree at their back to protect them from the cold north wind. You can recognize these buck beds in the snow because the dominant bucks will use the best position available and the rest of the deer will have to settle for second best. These beds will be larger of course and you will sometimes see large tracks and other evide nces in the snow that a buck is using the bed.

Because thermal cover is dense, trails zigzag through it, but you can find where they exit the cover if you spend the time looking it over. The great thing about heavy thermal cover in the winter is that you can move in and bump the deer out of it, scout it out well, and they will be back using it in a short time because it is the only game in town. They need the benefits of this premiere cover and they will be back after one disturbance.

The second most common bedding areas in the winter are south-facing open slopes that get a lot of sun. Whitetails tend to use these areas when there is little wind and they can soak up the sun’s warming rays. Look for open timber where the sun can get through. These areas will typically have a lot of beds because the deer will get up and move as the shadow of a tree falls on them. So they may actually use 3-4 beds during the course of the day.

Once again, even these open-wooded hillsides will often have a distinct trail leading from them. The deer tend to congregate in one area before leaving the area to feed.

Now that we have established where they are likely to be feeding and bedding on a given day, it’s a much easier task to get in a position to intercept them between the two. Patterning deer during this time is about as close to a slam dunk as there is in whitetail hunting, especially when there is snow on the ground and nothing is left to the imagination. It’s all right there in plain sight.

Well-worn trails provide evidence of their travel patterns that can help the bowhunter decide where to set up an ambush. A ground blind along the edge or blended in with cornstalks right in the middle of the food is often the perfect spot. When setting up over a vast field, keep in mind that the tops of hills are often cleared of snow by the wind and offer deer the easiest access to the food. It is very common for bucks to approach the field through the escape cover, and make their way out into the field cautiously. The most mature bucks will typically enter the field last.

A bowhunter must get up close and personal when in a treestand. That generally means setting up off the field a ways, back up the trail.  Often mature bucks will hang up for a while before entering the field. A bowhunter in a treestand 50 yards from the field’s edge may have the advantage of getting a shot at a buck that won’t expose himself in the open field before dark.

In summary, pay attention to the weather conditions and the temperature to make an educated guess on any given day as to where the deer are likely to be bedding. Factor in what food sources they might choose that day based on what their body would be calling for. Know your area ahead of time so you can predict where the bucks are likely to be that afternoon and move right in.

Hunting last minute whitetails is a game of making educated guesses as to where to be, and when. The more information you have, the more educated your guess will be. It’s a matter of upping your odds by putting all the pieces of the puzzle together: The right macronutrients, the right bedding areas and the ambush points between them.