Every Deer Hunter Should Master These 3 Essential Calls

Using calls to bring in a buck can be hit or miss and many hunters just give up trying. But if you learn to use these three calls in the right place at the right time, you will be a believer.

It took me four years to draw the nonresident Iowa deer tag that had me sitting in a tree in the southeastern part of the state. I was positioned at the head of a steep ditch leading down into a woodlot, but I was surrounded on three sides by tall CRP grass. Typical of Iowa, it was a very windy day.

About 100 yards away, a buck’s head appeared above the tall grass and his headgear made my heart beat a little faster. The mature, thick-antlered 10-pointer was walking from right to left, heading to the next ravine. I pulled a call out of my pocket and put it to my mouth.

Now back up 20 years or so. It was in the early 80’s when I first heard a buck make the loud guttural grunt that has become known as the “roar” or “growl” depending on who is selling the call which tries to imitate that sound. Let’s just say it was the loudest, distinctive grunt I had ever heard. It was an aggressive sound and I knew it would bring in a big buck if I could make that sound. I spent years trying to imitate that sound with grunt tubes but nothing worked, mostly because they turned into a squeak when you try to get the volume you need. Then Primos introduced the “Buck Roar” and I finally had a call in my hand that could make that sound. 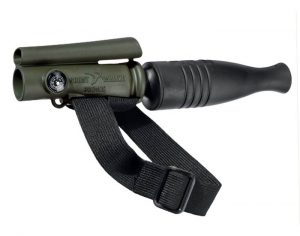 In order to overcome the rushing wind on that November day in Iowa, with a buck 100 yards away, I blew into the Buck Roar as hard as I could, “BLAAAAAAAAAT!” Just like in the movies, the buck turned and walked right to the base of my tree where I watched my arrow slice between the ribs of my largest buck to date.

This call has limited application, but when it’s right, it’s super effective. For mature bucks that are on the prowl looking for action, they simply cannot resist the urge to check out the source of the sound. The reason? Because bucks make this noise when they are in the presence of a doe in heat that just won’t let them mount her. This is a frustration sound bucks make when they are just hours, sometimes minutes from being able to breed. Any buck who hears this sound knows it means there is a hot doe in the vicinity and he is going to check it out.

Grunt tubes can imitate the sound of a doe bleat, but are better for just imitating the grunting vocalization of a deer. Deer hear these ordinary grunts every day and rarely pay much attention to them. Cut the can type calls that you turn over in your hand do the best job of imitating the drawn-out bleat that really gets a buck’s attention. It’s a variable-pitched wail made by does when they are in heat or in trouble. It’s a doe’s way of saying, “here I am, come over here.”

This sound will call in bucks you can see or can be used blind in an attempt to call in deer that might be in the area within hearing. I use this call from time to time whenever I am hunting near a bedding area. The key to this call, and any call for that matter, is using it in an area where there is ground cover or a terrain feature the deer cannot see over. If a deer can see the area around your stand and don’t see any deer that could have made the call, they are probably not going to come.

When the deer is coming, stop calling. Call again only if they show signs of losing interest or start moving away. 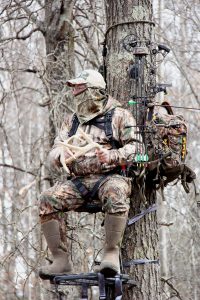 Many hunters have had little to no success with rattling, and that’s usually due to one of two things. Rattling works poorly when there are few mature bucks around or if the buck-doe ratio is out of balance. You need to be in an area where there is a good number of mature bucks and there is a lot of competition for breeding. Where I live in Minnesota, does far outnumber bucks and there is little fighting and interaction between bucks during the breeding season. Every buck gets in on the action. I have had excellent luck bringing in bucks with rattling antlers in other states.

Bucks are remarkable in their ability to pinpoint the source of a sound. I can’t count the number of times I have rattled antlers and had a buck run literally right to the base of my tree. I groan at the memories of being caught with the rattling antlers in my hand when I first see a buck staring right at me, preventing me from getting off a shot. For this reason I have become more conservative in my rattling.

I no longer crash the antlers together for long periods, which increases the odds that a buck is going to sneak in and catch me off-guard. My typical sequence starts out with 15-30 seconds of light rattling in case any deer is nearby. Then after about five minutes, I give the rattling a little more gusto for 15-30 seconds. After another five minutes, I use 2-3 periods of about 5-7 seconds of rattling as hard as I can with about 30 seconds in between. If any deer are going to respond, this offers the best chance of attracting them without having them pinpoint your location.

Learn these three calls and you will find success with them if you use them in the right places at the right times. With all calling, make sure you are positioned in such a way that the deer have to come over there to find the source of the sound. Rattling in open hardwoods or flat ground with good visibility isn’t going to work well if the deer can simply look over there and don’t see a deer. I will go into that in more detail in a future column.