How to Fire Up Your Bear Baits Get on location and give them the right things to eat and you’ll have bears hitting the bait in no time; here’s how.

I confess. I was playing a game on my phone as I sat in the treestand that early fall day. I had been glancing at my surroundings every few minutes, but really I didn’t expect to see a bear just yet. It was four hours before dark on the first day of the 2010 bear season. So the sight of a patch of black fur moving through the brush caught me a little off guard. Gulp! I swallowed hard as my adrenaline glands dumped their magic potion into my bloodstream. I reached down to tap my 14-year-old son Sterling on the shoulder.

“Bear coming!” I hissed in a half-whisper. We had only been in the stands for 40 minutes, yet Sterling was about to get an opportunity to see a bear, in the wild, up close and personal, for the first time. And his back pocket contained a bear tag. I hadn’t drawn this year; I was along for the moral support and to video anything exciting that might happen. And it was about to get really exciting!

The adrenaline surge continued as it took the bear 10 minutes of stealthy movement to close the last 20 yards to the bait. But this gave Sterling time to carefully get his bow off the hanger and in position for a shot. I recorded video as I watched through amazed eyes as my fidgety adolescent kept his cool while waiting for the right shot. His arrow flew true and the bear crashed through the brush for a short distance; then piled up within sight. Then Sterling fell apart.

Well… okay, we both fell apart. I admit, my knees were shaking as bad as his. See the video at the end of this story.

This had been a 40-minute bear hunt, and that is amazing in itself. But truthfully, this was only the culmination of doing a lot of things right over the course of several weeks. If you are going to shoot a bear over bait, you must first overcome the challenge of getting a cautious bear at the site during daylight. And that is a lot harder than most people think. A dozen years of serious bear hunting has taught me some things that have helped improve my odds. This was the third bear our family has bagged off that same bait site in the past six years. Let’s have a look at why I believe my system works.

Bears have an amazing sense of smell and I have no doubt that they can sense a good-smelling bait from a half-mile downwind. But if you are not on location, they’ll never smell it in the first place. During the late summer and fall when we are baiting bears, the bruins have one thing on their mind… eating. They are in a state called hyperphagia which means they are gobbling up high-carbohydrate foods in order to store fat for the long winter months of inactivity. They often feed for 20 hours a day. That means they are on their feet a lot, and travelling from place to place in their search for food. They follow terrain features like field edges, ridges and the shorelines of lakes, rivers and swamps. In more arid terrain, your bait needs to be within a mile of water. When bears are gorging themselves, they need a good long drink every day. If you choose your bait site using the prevailing wind direction, while taking into account these terrain features, you will get a bear to commit to your bait. Today’s technology has made this easier than ever. Aerial photos, such as those found on Google Earth, help you find these terrain features before you ever leave home. Forget about sign; you will not find much bear sign. Set on terrain. Once you have determined your general location, you must move in and put your bait right on target in a more specific location. For this pinpoint accuracy, you need to take into account several things: The right tree for your stand (which needs to be comfortable too!), the proximity of heavy cover, and what I call the “Comfort Factor.” The Comfort Factor goes hand in hand with heavy cover. Bears are reluctant to cross open areas in the daylight. If you can locate the bait where they can stay in cover during their approach, they are more likely to come in during shooting hours. If you locate your bait in open timber for example, they may not be comfortable moving in on the bait until after dark. I like to pick out a place that has lots of ground cover near a large block of timber, and put my bait right in the thick stuff. This means a lot more work trimming a shooting lane to create a clear path from your treestand to the bait, but it is worth the trouble.

I hunt where there is a good deal of competition for the bears. Baiting is popular in this part of Minnesota. Plus most of my baits re near a large state forest that has a lot of hunting activity. I have found that one of the keys to success is to get the bears coming to your bait first. I am convinced that the first day or two after you put the bait out is going to make or break your hunt. Here’s an important thing to remember: The actual bait you use is secondary. Its job is to get them to come back over and over again. You have to get them there initially to be successful. For this reason, I pull out all the stops when I first put the bait out. Getting bears to visit your bait site is the biggest hurdle of all. Here are a few tips that will really get the bait fired up. All year long I save used cooking oil, bacon grease, hamburger grease and so forth. We deep fry a lot of fish at our house and the used vegetable oil smells pretty good to a bear, especially when mixed with bacon grease. I use about a gallon of it when I first set each bait. I spice it up with Gold Rush, which smells fantastic. I splash it on trees and bushes and glug it out on the ground around the bait. The more it gets on the paws of the bears–and other animals such as coons, fox and squirrels–the better. They will track it all around, spreading the word for you.

Now I add some sweetness to the mix. I love Super Sweet Cherry Burst, it’s amazing. I have had great success with commercial bear sprays too, specifically Gold Mist and Blueberry. It really works. I spray it on the bushes where they will walk through it and get it on their fur, which will spread the word.

Once you overcome the difficulty of getting a bear to visit your site, you have to make them a regular. That is best done with a wide range of baits; however I start my baits with pastries. I get them from the local supermarkets and I have five deep freezers because I really stock up since I am usually running 6-8 baits for family and friends. Bears love pastries, but they need variety to keep them coming back on a regular pattern. With varying quantities, I use trail mix, candy, fruits and vegetables, and meat. I do not add the meat until the bait is getting hit every day. It spoils fast in the warm temperatures of baiting season. Spoiled meat with maggots crawling in it has little to no attraction to the bears. 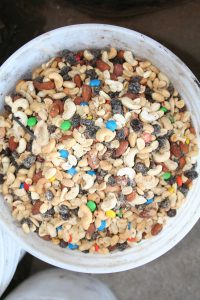 I have a source for candies that is actually quite amazing. It’s a fellow that buys overruns from candy manufacturers and sells the sweets to bear hunters. He calls his business Lucky 7 Bear Bait. When I go there, I come home with some real goodies. I get trail mix by the 55-gallon barrel. I have brought home such things as 30–pound boxes of gummy bears, a steel drum of cookie dough, a drum of trail mix, a 50-pound box of candy corn… you get the idea. It all works and works well, but I can’t overstress that the variety is important. I am convinced that bears are a lot like people in that they get to the point where they have eaten so much sweet stuff that they feel kind of blah. They wouldn’t eat another piece of chocolate if you put it right in front of them. But the bait sites that have a wide range of tasty treats will hook them and hold them. Once my baits are being hit, I put Covert Scouting Camera on them to determine which bears are coming in and at what times. Be sure to secure the cameras in bear-proof boxes. These pictures are some of the most valuable information a bear baiter can have. You may find that you have a site that’s being cleaned up every day, but it is being hit by an aggressive sow with cubs which has driven the other bears off the bait. You might as well stop wasting your bait at that location. Sometimes you will find that you have a large bear that never comes to the bait in the daylight. The pictures will tell the story. Here in Minnesota, the legal baiting period begins two to three weeks before the season opens on September 1st. By the time two weeks is up, I usually have a couple baits working really well, and hundreds of pictures of bears at them. These pictures tell me a wide range of stories about the bears visiting my sites: Both good stories and bad stories.

Trail camera pictures will also tell you what bait to hunt first, like the one Sterling and I set up on that opening day I referred to earlier. Out of six baits, I had two of what I considered “high percentage” baits that day. We chose the one we call the “beaver pond stand.” It is on the edge of an old, dried up beaver pond, and we had pictures of a bear hitting it in the daylight several times. We were anticipating the adrenaline rush that comes with baiting bears, and we got it. If you consider my suggestions and combine them with your own experience, I am sure you will soon experience an adrenaline rush of your own as you see the bruin of the forest closing in on you!