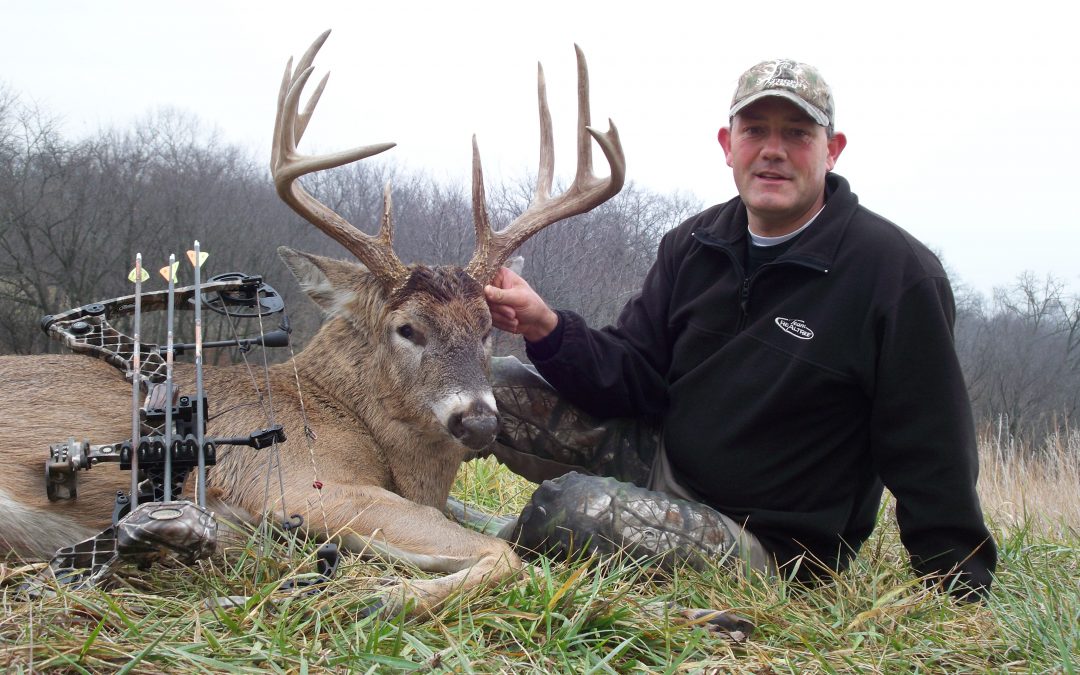 It’s not like being at home when you have all season to get it done.

I settled into my stand before daylight with high hopes. I had arrived in Iowa the previous day with a coveted archery tag in my pocket and spent the day scouting out a large piece of public land. I had found this area in mid-afternoon and hung a stand. Within view were a dozen rubs and half that many scrapes. It looked like a natural funnel, and I planned to park myself there for the entire early-November day.

This was one of my first out-of-state road trips for whitetail, and I didn’t know it at the time, but I had made several mistakes. Now, having more than 20 of these trips under my belt, I do things a little differently.

About an hour after daylight I heard the distinct sound of two bucks fighting just over the crest of a hill to my north. I could hear the clashing and shoving clearly, they were only 100 yards away! But I never did see them; they left by another route and were unresponsive to my calling. 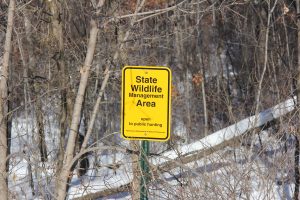 An hour later, a few does and a buck moved down a ridge to my west. They too ignored my pleading through the grunt tube. I began to lose confidence in my spot. Over the next few hours, what I had seen began to grind on me and soon I was on the ground checking things out. The two bucks had been fighting near what appeared to be a bedding area in a thick creek bottom. The trail on the ridge also led to that same bedding area.

I learned a hard lesson through that experience. During my day of scouting, I had been sneaking around like a cat, looking for some sign to set up on. When I found it, I set up and I was done. Over the years I have learned that this is a low-percentage way to go about killing a buck on public land. Nowadays, I want to know what’s over that hill. I want to know where the deer are bedding and feeding and what stage of the rut the deer are in. I also want to know I am in the best spot I can be. It’s a whole lot easier to park your butt in a stand and remain alert for an all-day sit if you have a high level of confidence in your spot.

So much of what we read nowadays and what we see on TV preaches minimal intrusion on private land, with the sanctuaries and inviolate areas that accompany well-managed hunting land. Those of us who hunt on public land do not have the same luxuries. Public land bucks are adept at patterning hunters and either move out or go nocturnal when they sense too much pressure. But how much pressure is too much? Humans use public land for everything from hunting squirrels to gathering berries and ginseng. Coon hunters run their dogs through the properties at night. Bowhunters walk regular paths to their stands morning and evenings. Bucks pattern them all and you should too. You need to avoid human activity as much as possible and to do that you need to know which areas are getting the most use.

It’s no secret that the best hunting on public land is far from the roads. That’s a given because the bucks move away from human intrusion, but they cannot totally avoid it, especially if there is no other place to go, and the does aren’t leaving. If the does are still around, the bucks won’t be far during the rut. And they have become somewhat conditioned to human scent. We have that going for us.

All these factors give us permission to learn the property intimately. You can limit your intrusion by spraying down with scent killer and keeping clean to minimize ground scent, but you cannot completely eliminate the clues to your presence. If you are going to learn the property, you will need to walk it out.

When I look at a new piece of property, I want to know as much as I can about it. I gather as much info as I can before I ever leave home. A call to a biologist or game warden can offer clues. Examining the property on Google Earth can show some potentially good areas, but you still have to burn the boot leather to learn the property.

Analyze trails and travel patterns. Where are they feeding and where are they bedding? Sometimes bedding areas can be hard to determine and you need to walk right in and bump the deer out before you find them. I hate doing that but it is part of the learning process. Once you have found it you do not need to intrude again, the bedding areas will be the same year after year, all other factors being equal. Land features that funnel deer movement will not change unless there is a significant change in landscape or food sources. The more you go back to the same properties in successive years, the less intrusive you will need to be.

Learn where the rubs and scrapes and rutting activity is found. But don’t make the same mistake I made those years ago in Iowa. Scout the surrounding area before hanging that stand. Rather than set up right over a bunch of scrapes, I have learned that it is often more successful to set up downwind of them to take advantage of the bucks that just scent-check them, or better yet, set up between the scrapes and the nearest bedding area so you increase your odds of connecting with a buck who leaves the bedding are right at last light to check his scrapes at night.

Trail Cameras are a big key to the puzzle

Trail cameras are a significant part of an aggressive hunting strategy. Photos give clues to the state of the rutting activity, the times the deer are moving, and most importantly, they allow you to take an inventory of the bucks in the area so you know what kind of potential is available to you. On one of my early road trips, I made the mistake of passing a 130-inch buck on day one when it turned out to be the biggest buck I saw all week. Heck I was in Kansas right? All the TV celebrities hold out for a 150 in Kansas right? As it turns out there wasn’t even a 140 on the property. A good trail camera inventory will really help with the decision-making process when a buck is in front of you. 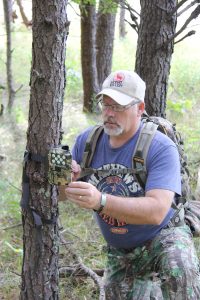 If my hunt is in the early part of the season, my cameras are going to be placed on trails, but once the rutting activity starts, most of my cameras are on scrapes, although some will be left on trails in funneling areas. It is not uncommon for me to have 6-8 cameras operating on a couple hundred acres. It’s all part of an aggressive scouting and hunting strategy. I realize with all this activity, I am burning the place out within a week or so, but that’s what it takes to make it happen in a short time.

Aggressive hunt means bold moves that must be done quickly and quietly. This means light equipment that goes up and tears down easily, but there are trade-offs because comfort is important to get you through the long sits once you settle into the right location and you are there for the long haul. I will sacrifice the light weight of a smaller platform in a stand but I tend to put importance on a comfortable seat. The Hawk Kickback stand has become my favorite stand because it offers the rare combination of comfort and light weight.

Stackable sticks like the Hawk Helium sticks that nestle together and attach without any rattling noise offer a safe way to get up the tree yet they are easy to carry for long distances plus attach quickly and easily. I hate burning valuable daylight moving a stand, so the quicker I can get from tree “A” to tree “B” and get settled in, the better I like it. Under the right situation with the right tree species, a climbing stand can be the right tool for the job, but it seems most of the places I hunt don’t have the greatest trees to use a climber. When using a climber I seem to spend more time hunting for a tree and less time hunting deer. 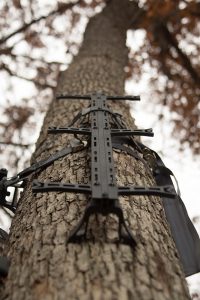 On occasion, the first stand I put up is likely to be in an area where I can see a lot of activity. This may be on the edge of an open field or along a creek bottom where I can see a distance up and down the flat. This allows me to observe deer movement patterns for one or two sits, then I will pack up and move accordingly. A perfect example of this is my 2010 hunt in Iowa where I placed my stand overlooking a thick bedding area along a river on a large public area. I could see up and down the riverbank for some distance; I could also see through the open timber of the bottom in several directions.  I was well back away from the road and I sat there twice before I became convinced that my best bet was going to be a trail leading along the bottom of a steep bank about 75 yards to the east.

Here’s where a highly portable outfit comes in handy. I packed up my gear and moved my stand the 75 yards and killed a mature buck two mornings later. It seems like most road trips come to a point where you choose one spot that you decide is your best bet and you push all your chips into the middle in that one spot. Sometimes these take some very bold moves and push the envelope when it comes to wind direction and shot distance. These “all-in” stands are the kinds of places where I have killed my best bucks but they are rarely the place where I first hung my stand in that area. I have also found that once you finally settle on that one stand location that offers you the confidence you need to spend long hours there, you will find that some location to be good year after year.

Hunting aggressively on a public land DIY trip is nothing like hunting at home; using the same strategies you use when you have a long period of time to fill your tag will let you down. It’s important to keep a mindset that is totally different than you would when you have an entire season to hunt a property. You have to get it done quickly and that means moving aggressively and taking calculated risks that you wouldn’t make if you weren’t hunting under a deadline.