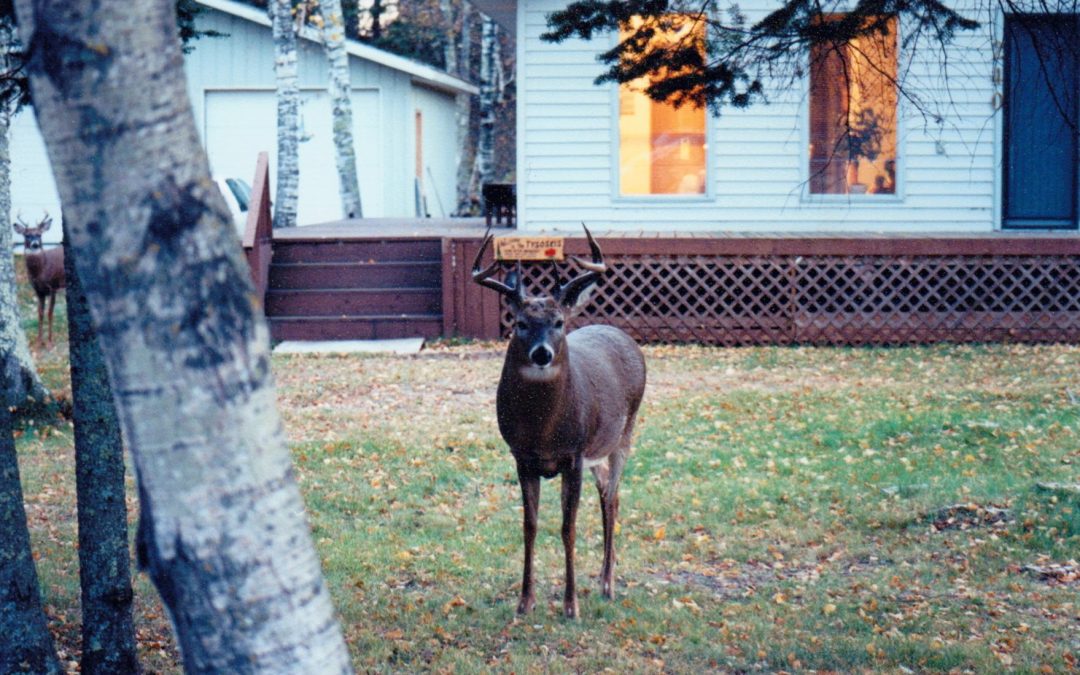 Small pockets of excellent whitetail habitat are found in nearly every community. Finding these little gems can provide excellent hunting for bucks that get little to no hunting pressure.

Driving through a suburban area, I was surprised to see a buck in my headlights. He was standing on the side of the road, looking for an opportunity to cross from one housing development to another, and man what a buck he was. The area was partially wooded with properties from two to five acres in size. There were small groups of unsold lots that were covered in trees with thick underbrush. It was the kind of place where a buck could grow old without fear of hunting pressure. His only worries were being hit by a car or chased by dogs.

I did some research and found that the property the buck had been leaving was owned by a real estate developer. The property bordered a small park with a walking trail. It was 15 acres he had not yet sold, and he gave me permission to hunt it over the phone. Just like that. “No one has ever asked before,” he said.

I never did shoot that particular buck but I got a lot of trail camera photos of him and two other nice bucks on the property. One of these days my hard work on that little gem of property is going to pay off. My friend Josh Runksmeier of Pequot Lakes, Minnesota had a similar thing happen to him; he located a huge buck in a large developed area with homes built in the woods, mostly on five acres pieces of real estate. His result was be 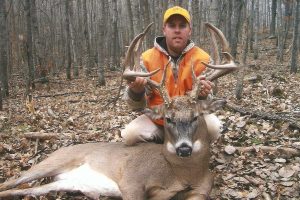 tter than mine; he was fortunate enough to put that buck on his wall that same season.

Bucks are growing old and big in these areas where they get almost no hunting pressure. It’s a misfortune that good bucks are dying of old age. Here’s how to do your part to end it.

A common theme in hunting these properties is being minimally intrusive with your presence and your scent. But I make an exception to that rule when I first acquire a piece of property. I like to cover it thoroughly and gather as much first hand information as I can. I want to know where the beds are located, how the deer are travelling the topography, what they are eating and where.

It’s a rare piece of property this small that has both a bedding and a feeding area. Usually you get one or the other, or neither. But that can be the case when you have good mast crops right on the property. When the acorns, locust pods and hazelnuts are on the ground, the bedding area and the feeding area may be all together in one place. That’s an ideal situation for a small property.

A lot of these small properties often tend to be tra

nsition areas between feeding and bedding locations. I have one that is a staging area near a crop field. The field is normally in alfalfa. It’s a great early season hunting spot because the bucks tend to hang out there for the last hour of daylight while the does move into the field.

These are all things I have learned from first exploring every inch of the property. Once you really get to know the property, you don’t have to do this again, but you do need to figure out what deer you have using the property.

Many of these small woodlots surrounded by homes are a bedroom of sorts for the deer. They spend their time in the thicker areas of the property and then move out under the cover of darkness to forage in the surrounding yards. Picking up acorns off mowed lawns is something deer cannot resist, and they readily move about the properties once the lights of the homes go out. Scouting these bedding areas can be a problem, because you tend to bump the deer out into the open during the day, and that’s not good for keeping a low profile.

If you find yourself with permission to hunt one of these small properties that seems to be a bedding area, here’s an off-beat idea for scouting it out: do your prospecting at night. The deer are all out roaming the surrounding real estate, so you can freely walk through the bedding areas and mark the entry and exit trails with a GPS or by simply dropping a pin on your smartphone’s mapping app. Sneak back in during the day and hang your stands.

The next thing you need to do is learn the potential. We need to find out what bucks are using the land and how often. I have found the best way to inventory the population is with game cameras monitoring trails and mineral licks. This two-pronged attack brings the deer to you with the mineral, and you go to the deer with the trail monitoring. The combination of the two assures that you get a picture of every deer on the property within a month or so. 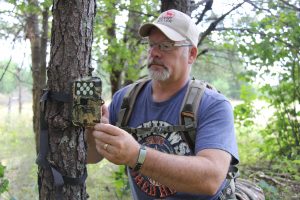 This technique works the best if you start in the spring to early summer when the minerals are most attractive to the deer. Does and bucks alike use the mineral sites and you can watch the antlers grow throughout the summer. It is important to keep your intrusion and ground scent to a minimum. I recommend checking the cameras not more than once every two weeks, and once a month is better if you can stand to wait that long.

Keep in mind that the deer using such a small area will be in a state of flux. A buck may be nearby, but may only visit the area with the cameras a couple times a summer. Don’t be discouraged, sometimes the bucks that aren’t living on the property are easier to kill since the ones that actually spend the majority of their time on that patch of ground have the best chance to pattern you.

Don’t panic if you seem to be getting pictures of lots of does, but few bucks other than yearlings. There is nothing wrong with being in the home range of a bunch of does, because the time of the year will come when being around a lot of does is a very good thing.

If you find that you have a bedding area on the property, you can make improvements to increase the attractiveness of it. Hinging trees and opening up the canopy to let more undergrowth thrive are two ways to do that, assuming you have permission to do so. Keep in mind that cutting trees can be one of the fastest ways to lose permission if the landowner doesn’t know exactly why you are doing it. Get approval in advance of making any significant changes to the property. The old saying that it’s easier to ask forgiveness than permission definitely does not apply here. 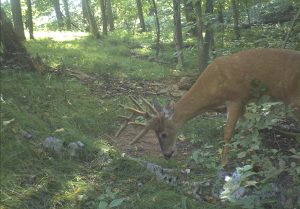 Another thing that I have found to be successful is making deer beds. Bucks like to lie with something at their back in an area they can have a view downwind. They don’t like to lie on sticks and pebbles so you can clean off the ground in a few areas and actually get the deer to use the specific beds you have created. Fallen logs or some of your hinge-cut trees make great backstops for self-made deer beds.

The more time you can get the deer to spend on your property the better your odds of bagging them. Improving bedding habitat is one of the best ways to do that.

Little things can make a big difference. I once had a big oak tree fall across one of the main trails on my small property during a summer storm. The deer funneled around it and eventually created a new network of trails that mostly took them off the property! By the time I realized what was going on I was losing much of my deer activity. I took a chainsaw and cut through a few limbs of that giant old tree, making a pathway through it, and soon the deer were back to their old ways.

On that little 15-acre property by the park, I started getting pictures of does and small bucks right away, but I also got a picture of a kid on a mountain bike, a woman walking her dog, a guy that appeared to be mushroom hunting and another guy carrying a fishing rod. There is no question that deer living in these types of environments get somewhat acclimated to human scent but this was a little ridiculous. If I wanted to get any daylight activity from mature bucks, I needed to keep out the riffraff.

No Trespassing signs helped a little, but actually just spreading the word around the neighborhood that the land was private and entering it was against the law had the most affect. I met the woman with the dog on the road walking one day and I kindly explained to her that the land was not public land but the park was. She got the message.

Now that we have our property improved and scouted, we know it like the back of our hand. We know what bucks are using it and have a rough idea of when and where they are travelling through. We have a couple treestands up and we are ready to put an arrow in a buck. But hold on! Patience is critically important when the season opens.

The first year I hunted that new piece of property by the park, I watched as people came and went, walking through the park and sometimes on the property. I even had a trail camera stolen. One of the treestands I put up was on a heavily used trail along the top of a ridge only 60 yards from the park’s asphalt walking trail. It was obvious that the deer didn’t react with panic each time they encountered human scent; if they had they would be in a panic every day.

But I made the mistake of thinking that would allow me to get away with risks I wouldn’t take on other properties with less human activity. Looking back at that first year, the benefit of hindsight tells me that I significantly reduced my chances of bagging a mature buck by taking chances with the wind, and sneaking out to the stand after work when I really shouldn’t have been moving through the property. These deer get really good at determining if a person is out for a stroll or if they have more sinister intentions. I do not know how they know, but they seem to know.

Truth is you can wreck the fragile potential of a tiny property by making one mistake. I now have two stands on that 15 acres, one for a wind with some east to southeast to it and one for winds from the west and northwest. I don’t hunt them if the conditions are not perfect. No exceptions. One of my stands is only 100 yards from the road, but to approach it correctly, I walk all the way around through the park and enter from the opposite side. It’s about 1/3 of a mile of extra effort but one of these days it will make the difference between seeing a bobbing white tail versus a red arrow.

Small properties in the right locations can be amazing gems. You can increase your odds of getting a shot at a buck on that property by hunting it right. Tread lightly and always think of the deer activity on that property as a very fragile thing that can be broken easily. Consider this outlook each time you are drooling over a trail camera picture of a nice buck. Resolve to do it the right way; you will eventually be rewarded for your diligence.