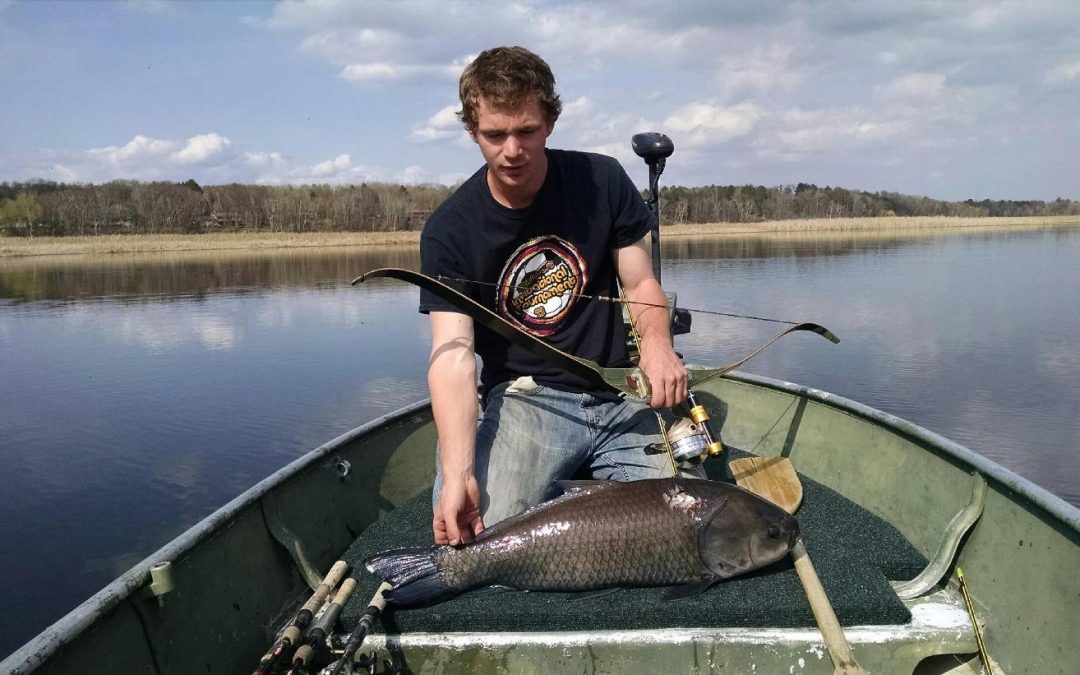 Bowfishing equipment has evolved a lot since I started trying it out 40 years ago. There is some high-tec stuff out there, believe me. My favorite bowfishing set-up features a Ben Pearson recurve that I got out of the “Free” box at a garage sale. No kidding.

That’s one of the things that makes bowfishing so great: you can make it as simple or as complicated as you want, and anyone can easily get started in bowfishing. The shots are close; rarely over 25 feet, and a bow of just about any draw length or poundage will do. 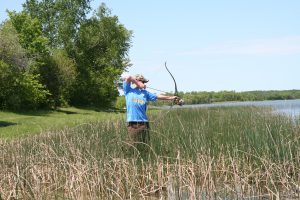 You need to be stealthy, to choose locations carefully, and you need to be a good shot. And being a good shot is not as easy as it sounds. It takes beginning bowfishers a while to get used to the fact that you have to “shoot where they ain’t.” Because of the refraction as the light enters the water, fish appear to be a lot nearer the surface than they actually are. So when you see a carp cruising the shallows, you must aim well below it, if your arrow is to hit its mark.

My 45-pound recurve has been the perfect bow for me. Compound bows work too, but because of the let-off, they have to be drawn all the way back to shoot. This is a disadvantage because shots are often quick and with little warning. The advantage of a recurve, or one of the wheel-bows made for bowfishing without a let-off, is that you can draw and shoot much more quickly. 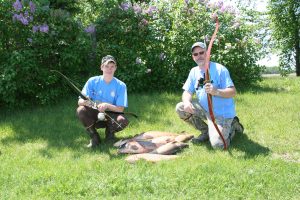 Arrows should be solid fiberglass, which gives them the sturdiness they need to take a pounding (they hit bottom a lot) and the extra weight gives them the kinetic energy they need to penetrate the water and then the fish. There are several different bowfishing tip designs, but they all have one primary feature: some sort of prongs to keep them from pulling back out of the fish; prongs which can be reversed so you can remove the fish from the arrow once you get it reeled in.

Reels are equally diverse. I started with a simple spool on which I hand-wound the line, and now I have a reel with a small crank that pulls all the line into a plastic jar. This set-up really works slick. My son Dawson uses a modified fishing reel that attaches to a mount on his bow. The simple spool reels are around $20 and the one I use is over $100, and there are good options at price points in between. All work, it just depends on how much you are willing to spend for convenience.

Where to find the fish

Many species of fish are legal to shoot with a bow. Carp, bowfin (also called dogfish), gar, buffalo and drum are among the most common. My experience is primarily with the common carp, since they are most abundant in Iowa and Minnesota where I have done most of my bowfishing. Plus, it is some of the best fish I have found to attract mink and raccoon to trap sets. You can have some success all year long, if you find yourself in the right place and the right time. But if you want consistent action, it takes place in the spring and early summer. 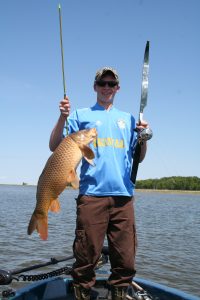 When the water warms up in late spring, carp move shallow to spawn. In most areas, this takes place when the water gets close to 70 degrees. In the upper Midwest, that’s usually late April to May.  Here in northern Minnesota, it may be later, and we had some fantastic carp shooting at Lake Manitoba in Canada during the first week of June while on a spring bear hunt. These carp may remain shallow where they are vulnerable to bowfishing for almost a month, but the best action will be in a window of opportunity of two weeks or less. When you hit it right, the action can be furious. The best spots are where you find the warmest water.

During summer, carp are again found in shallow, warm water where they slurp plants off the surface and cruise around looking for insects and dead baitfish to eat. Thus, you have a second window of opportunity. You are often shooting at their heads, which might be the only thing visible above muddy water. I also have seen pods of carp cruising the shallow bays of clear-water lakes during mid-summer, and have enjoyed good shooting under those conditions. 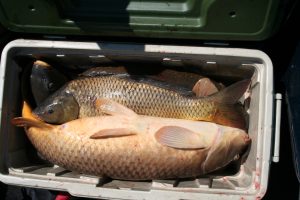 Typically, I shoot from the front of a boat with an electric trolling motor quietly pulling me through the shallows. However, I also have had a ball shooting while slowly walking the back bays where the water is warm. The carp are often lying just below the surface, sunning themselves, but they are extremely spooky, and you have to use a stealthy approach. Shots will generally be short. A 10-yard shot is a very long shot in bowfishing; the majority will be more like 15 feet. It takes some time to get good at hitting a target that close. Most bowhunters do not practice 10-foot shots, but it is a good idea to do so before you go after carp.

I cannot stress too much that the refraction of the light on the water makes the target look closer to the surface than it actually is, so you have to shoot below them to hit them. This is one thing that has to become second nature, and you will miss a few fish until you get on to it. My son Dawson missed his first nine shots one day before getting it dialed in. Then he figured it out and hit his next five in a row!

Carp shooting is so much fun that it has become a sport in itself for our family, and the fact that we are out getting trapping bait is a nice bonus. For us, the sport has two objectives: fun and fur. Give it a try, and see if you don’t get hooked like we did!