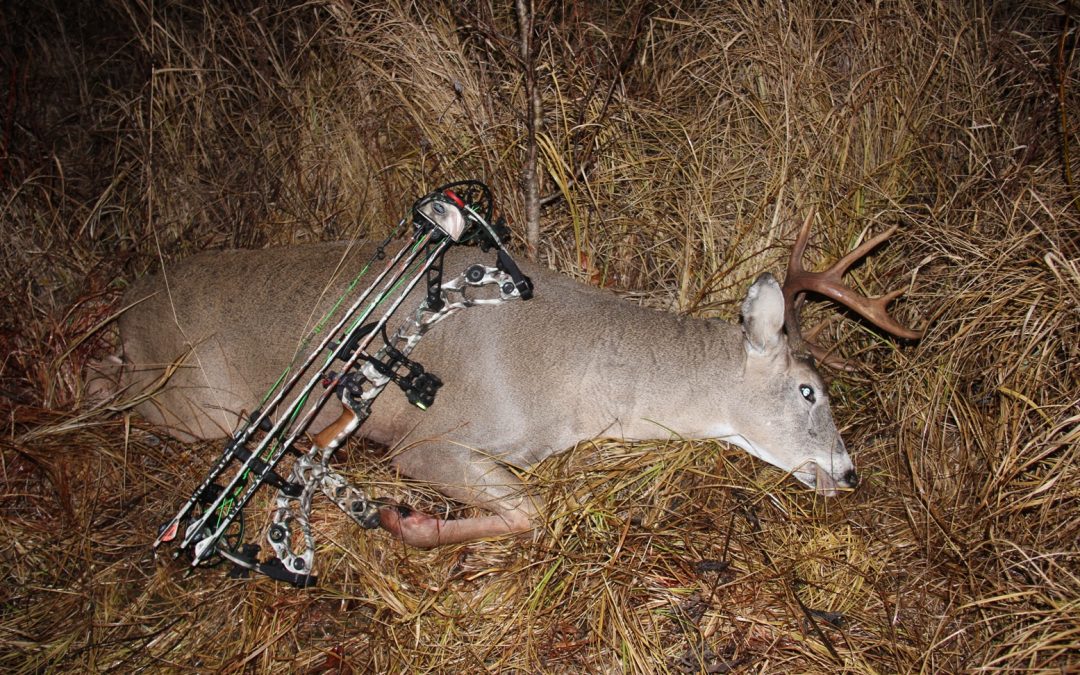 Well we just got done getting a buck out of the bush. It’s a crazy story but bear with me.

First of all the wind was great for a sit at the hayfield. A west wind is good because most of the deer come out of a tractor trail at the southwest corner of the field, which is where I have my stand. I only have two days left to hunt so I was thinking about which bucks I was willing to shoot. If that 9-point came through again, would I shoot him? I’m known for lowering my standards towards the end of the hunt.

I got settled in about 2:30 and had a steady stream of deer moving through back and forth all evening. Lots of does and small bucks. About 6:30 there wasn’t much light left when two large-bodied deer appeared on the west side of the field and started making their way towards the deer in front of me. These were definitely two bigger bucks but with several does right in front of me I couldn’t make a move to even raise my binoculars.

As they got closer I could see it was the 9-point I had passed up previously and a 10-point that I had only seen photos of. The 10 had a little longer tines and I decided if he gave me a shot I would take it. They started bothering the does and bumping them around. Soon they both began to concentrate on one doe and they ran her off to my right 100 yards or so. By now it was getting dark enough that I was concerned my chances at a shot were done since they had moved so far away. But shortly they turned around and started heading back at an angle towards me. The doe was zig-zagging with the 10-point right on her heels and the 9-point right behind. The heavy overcast was causing darkness to close in quickly.

As they came closer, they looked like they might actually get within range. When they went behind a clump of trees that blocked my vision, I looked around and since the other deer were staring their way, I drew my bow so I would be ready when they came out the other side of the trees. It was a moment but here they came and they were closer. I saw the doe go through my sight picture and right behind her was the buck so I settled my sight pin in his chest in case they would stop and offer me a shot. Sure enough, the buck stopped right behind a patch of weeds that I had earlier ranged at 35 yards. I anchored the pin and touched it off. I heard the tell-tale “Thwack” of a solid hit.

Pandemonium broke loose as deer were running everywhere. I hung my bow up and got my binoculars to my eyes just in time to see the 10-point running straight away to the north with a group of four other does and bucks. At the top of a hill 300 yards away, he stopped and stood still. The others all stopped to look back at him. He just stood there for the longest time as his head began to droop. I thought for a moment there it looked like he was feeding, but surely his head must be just sagging as he dies. This lasted quite a while and I could barely see when a doe looped back around and he took off chasing her. WHAT??!!!!

I texted Tom to come clear the field with the 4-wheeler and when he arrived I got down and started looking for my arrow. We soon found it covered with blood from end to end. There was blood at impact and a good blood trail so we took it right up. We headed straight west into the bush, which was not what I expected. Another 30 yards of easy trailing found us looking over a dead buck which had been heart shot. When I lifted his head I could not believe my eyes, it was the 9-point. 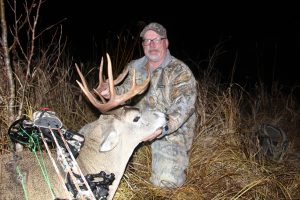 Replaying this whole episode in my mind I can only think of one way this happened. When they were behind that clump of trees for a moment, the doe must have made a circle or something, and somehow the two bucks traded places so the 9-point was now in the lead. When they came back into my view, I was concentrating so hard on getting ready for any shot that may come in the gathering darkness, I never looked at the antlers to realize that I was now about to shoot a different buck.

At any rate, this is a nice buck and I am happy with him. There are a lot bigger bucks here, but after all, I do not want to set the bar too high so I have reason to come back and try to get a better one. Thanks to Tom and Deb for putting up with me for this week and working so hard at raising an amazing deer herd in the Canadian bush.

Tomorrow morning we will skin and quarter the buck and put it in the chest freezer in my trailer. Then I will pull my cameras and ground blind and head down the road towards another hunting adventure in Kansas, where it will be a lot warmer, and hopefully the bucks will be running hard.